A design by Ashari Architects for an architectural installation in Iran is a direct response to the need to reconnect with the senses. The project, a pavilion built from a cube that holds a suspended brick volume, shows the potential of the use of this material by creating distinct atmospheres.

From the Architects. Our response to the challenging architectural installation competition near one of the most important historic gardens “Afif Abad Garden” in Shiraz, Iran was PAUSE.

PAUSE is the childish adventure feeling and inspiration that we have not experienced since the childhood. PAUSE tries to revive the feelings that we have been ignoring. Feeling of brick texture tactile; hearing the sound of our steps on the metal sheets, looking at the sky which we pass under of it every single day without any attention to it, not even trying to pause to enjoy it.

Listening to the “water features at the site," PAUSE from the outside is a cube that holds a suspended brick volume. This is adequate enough to incite the adventure and curiosity senses. By passing the brick wall entrance, we reach a dark closed space which can’t hear anything except the sound of metal sheets under our steps. We continue our journey by touching the brick textures.

This concludes inciting and emphasizing our auditory and tactile senses which lead to follow our only possible guide that is the brick texture to move forward while our eyes are constantly searching to find a light beam or an opening. The mirrors and the light reflections gradually inform us about an occurrence that is about to happen. A little light beam is reveled and suddenly a stunning source of light from above lightens the space. We find ourselves under the sky which is framed and surrounded by mirrors and define the border between us and the environment.

As to respect the maximum allowed space which is 4m X 4m X 4m, the effort was on implementing our concept in the exactly defined space. Creating a moving knot in circles of the space led us to initiate a circular volume in a cubic volume. By extruding the circle to create a cylinder and from cylinder to cone to create difference volume radiuses achieving the spatial diversity between the floor and ceiling and as a result drawing attention to the people above.

In order to incite people’s curiosity sense, we covered all around the interior cone inside the cube structure with metal sheets. Afterward, the entrance/exit space was defined by changing the material and creating a brick wall that invites the visitors.

To increase safety, 80 cm at the bottom part of the cone is omitted to supervise the people movement which led us to suspend the cone and that ended up as an interesting challenge of structure for us.

All of the bricks that are used in the pavilion are cut in half and installed with the designed straps. The mirrors’ density in the inside increases as you move your eyes toward the upper part of the cone. Finally, to prevent the direct sun light and control the light the ceiling is covered by metal sheets. A hole has been cut out from the ceiling in order to push everyone's focus to the above space. 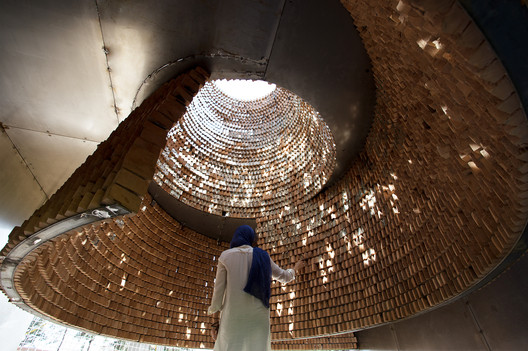