As anyone who has recently attempted apartment-hunting in a major urban area will know, reasonably-priced housing can be difficult to come by for many and salaries don’t always seem to match the cost of living. This gap is contributing to housing crises in developed and developing countries worldwide. People are simply being priced out of cities, where housing has become a commodity instead of a basic human right. Financial speculation and states’ support of financial markets in a way that makes housing unaffordable has created an unsustainable global housing crisis.

Earlier this year the 13th Annual Demographia International Housing Affordability Survey was released for 2017, revealing that the number of “severely unaffordable” major housing markets rose from 26 to 29 this year; the problem is getting worse. The study evaluates 406 metropolitan housing markets in nine of the world's major economies and uses the “median multiple” approach to determine affordability. By dividing the median house price by the median household income of an area, this method is meant to be a summary of “middle-income housing affordability.”

If the price of housing continues to rise at the rate that it has, it could have drastic consequences for our cities. Unfortunately, while a collective paradigm shift may be necessary to address the overarching problem of how governments and investors approach housing, often each city also has other unique factors influencing its housing market, so there is likely not a one-size-fits-all solution to the crises. Unattainably high housing prices should not be considered an indication of a city’s success or desirability, but instead as a failure to respond to its given conditions and to provide the housing its citizens need.

In this article, although home prices in one city may be higher than another, that city may be considered relatively “less expensive” because of residents’ income. Below is a list of the top 9 least affordable cities for 2017, each of which scored over a 9.0 using the mean multiple approach—meaning that the median home costs 9 years' worth of the median person's income. Of course, in each city the main question is: “why?”

Beginning with the best of the worst and moving towards the most expensive, as the 9th most unaffordable city San Francisco suffers from many challenges that are causing its high housing prices, from well-meaning zoning laws and restrictive land use regulations, to the recent influx of tech companies. San Francisco’s location on a peninsula means that its only real option for adding housing supply is to go vertically. However, in most of San Francisco the zoning laws prohibit any buildings over 40 feet tall, and most existing buildings are not even close to that limit. San Franciscans are concerned with maintaining their views, their parks, and their residential areas, which has made high-rise development outside of downtown virtually impossible. Another problem seems to be the city’s priorities in the housing that does get built, having met and nearly doubled the amount of luxury housing in demand and yet only providing 18.1% of necessary middle-class housing. The demand side of the equation is also complicated by the tech companies moving to the area, whose well-paid employees can afford higher rents and are thereby gentrifying neighborhoods where other groups are being priced-out entirely.

Los Angeles sees more frequent luxury high-rise development than San Francisco, and yet that may not be the major problem in its housing market. Instead, what Los Angeles suffers from is an extremely low vacancy rate, the lowest in the United States as of 2016, at 3.1%. So in fact, the luxury high rises are helping to meet demand, but obviously they won’t do the job alone. Like many of these expensive cities, Los Angeles is in desperate need of more middle class housing as well. In past years housing prices have risen consistently all over the city, not only in areas with increased development, which points to the lack of vacancy as the underlying issue. People who are determined to live in the city may have such a hard time finding a place that they’re willing to pay upwards of 50% of their income on housing; a low vacancy rate means all the power resides with the landlords and property owners who can set the prices where they like knowing they’ll find someone to pay it.

7. Honolulu: Why is Honolulu so expensive?

Another city with a difficult supply and demand problem like San Francisco is Honolulu. Being an island, Hawaii of course has very limited space for development and expansion as well as some of the most restrictive land use laws to protect the natural landscape. Development can take years to complete and meanwhile people need homes. Home prices in Hawaii have always been significantly higher than the mainland United States, starting around World War II. Once it was cheaper to fly to Hawaii, the tourism market boomed and demand for people who wanted to move permanently to the islands increased with no supply boost to match. Today what’s influencing Honolulu’s housing prices is an extension of the same situation; it has become one of the most desirable places for the wealthy international “1 percent” population to buy property. Honolulu lacks affordable housing for locals, and Hawaii is the only state in the US where the housing prices are not directly determined by the incomes of the people who live there, but instead by outside demand.

6. Melbourne: Why is Melbourne so expensive?

While we’ll see Sydney higher up on the list, Melbourne is quickly catching up to its rival in unaffordability—one competition the locals probably wouldn’t mind losing. Often voted the most livable city in Australia and known for its culture and community, Melbourne is quickly gaining popularity and, with it, a sharp population increase. In fact, Melbourne is projected to overtake Sydney as the largest city in Australia by 2050. This phenomenon has triggered the now-familiar supply and demand struggle we’re coming to see as a pattern on this list, and one thing that makes Melbourne particularly expensive to live in is that it’s particularly expensive to build in. In fact, Melbourne is one of the most expensive cities to build in worldwide, thanks in part to a long history of powerful trade unions, which have protected workers’ rights but also increased construction costs. Another factor contributing to the high construction costs is Australia’s geographic isolation, as there’s less private sector competition to drive prices down and many construction materials must be imported.

5. San Jose: Why is San Jose so expensive?

The award for the most expensive housing market in the United States goes to San Jose, California, beating out the more infamously unaffordable cities of San Francisco and Los Angeles. Speculation development seems to be a particular problem in California and specifically in San Jose, wherein developers see housing more as an investment than as a resource for the city’s population. San Jose, like San Francisco, is affected by its proximity to Silicon Valley and therefore the increase in employment in the area led to an increase in demand and consequently housing costs. San Jose is also seeing interest from many international migrants, since it’s a desirable place to live. All of this likely contributes to the amount of short term investments in property in the area, beneficial to the developers but not actually solving the problems of the local population’s need for housing.

4. Auckland: Why is Auckland so expensive?

In the case of Auckland, New Zealand, the specific factors considered in the Demographia survey had an impact on landing the city so high up the list. Because the survey took into account home price in relation to income, the relatively moderate income in Auckland compared to its high housing prices gave it a very unaffordable rating. The problem in Auckland is that while housing prices have increased in recent years, wages have remained relatively stationary. Auckland is considered New Zealand’s only major housing market for the purpose of the report—"major market" in the report's terms indicates an area with over 1 million people—and its unaffordability factor has nearly doubled since the annual survey began in 2004. As a desirable destination, Auckland is another city suffering from increased population and insufficient supply, as well as speculation and house-flipping for a profit.

3. Vancouver: Why is Vancouver so expensive?

Vancouver seems to have a very specific problem in that much of its real estate is being bought by foreign buyers, particularly from mainland China. This may sound like an odd phenomenon, but Vancouver is what’s considered a “gateway city,” a title shared with Sydney and Hong Kong, the only two less affordable cities on the list. Gateway cities have high immigration-driven population growth as well as a huge amount of foreign investment, which leads to skyrocketing home prices. As in Honolulu, the market is being driven by something other than owner-occupiers, specifically offshore investors in the case of Vancouver. While these investors, who come in wealthy and continue to make huge salaries outside of Canada, mostly buy luxury housing, it has the effect of raising housing prices across the market and geographically across the city, thereby affecting many middle- and lower-income Vancouverites as well.

2. Sydney: Why is Sydney so expensive?

Second place for the least affordable city goes Sydney, the second Australian city to make the top ten. Sydney’s mean multiple score of 12.2 means that on average a home costs over 12 years’ wages. Unlike areas with limited real estate like Honolulu or San Francisco, Australia certainly has no shortage of land, so that can’t be what’s driving prices. In fact, Sydney could benefit from more decentralization in terms of its housing costs, with more than 4.8 million of the 7.7 million people in all of New South Wales living in greater Sydney. This density is at least somewhat intentional however: the Demographia report cites urban containment as Sydney’s biggest problem in terms of affordability. Urban containment policies try to limit urban sprawl and protect greenfield land by encouraging density in existing housing areas. While there are benefits to urban density, its most notable effect in Sydney has been higher land prices and therefore higher home prices. Sydney also has the lowest unemployment rate of any state capital in Australia and like with other cities on the list, the increase in population created by these jobs is not being met by the housing stock, as the restrictions on land use are making it difficult to meet demand.

1. Hong Kong: Why is Hong Kong so expensive?

And finally, the number one least affordable city, perhaps unsurprisingly, is Hong Kong by a long shot. Even compared to number two, Sydney, Hong Kong’s mean multiple score is almost 6 points higher at 18.1, which is actually down from 19 last year. Multiple factors influence Hong Kong’s housing costs, including the ubiquitous supply/demand refrain and, of course, the incredibly high density and scarcity of land. The Government controls and leases most of the remaining developable land, and unfortunately there’s not much incentive for the government to try to decrease the cost of Hong Kong’s housing because a large amount of its revenue comes from land sales, which allows the tax rate to remain so low. If property values were to drop, the government would lose revenue, and if they dropped too much, it could possibly even have to reevaluate its tax system. 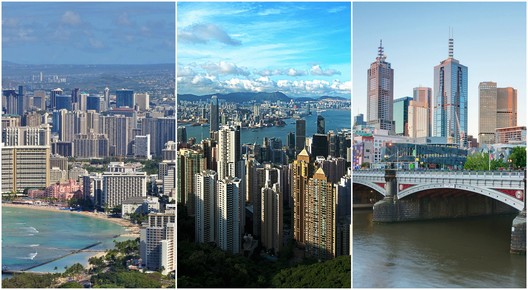