Bee Breeders have selected the winners of the Mango Vinyl Hub Competition, challenging entries to marry architecture, music, industry, and design in the repurposing of a decrepit tin foil factory in Cesis, Latvia. With a focus on the revival of the vinyl record industry, “successful projects temper the impulse of retrojecting nostalgic hallmark or tradition, through revitalization of purpose of an artifact and history of a bygone era.”

Here are the winning visions of the Mango Vinyl Hub: 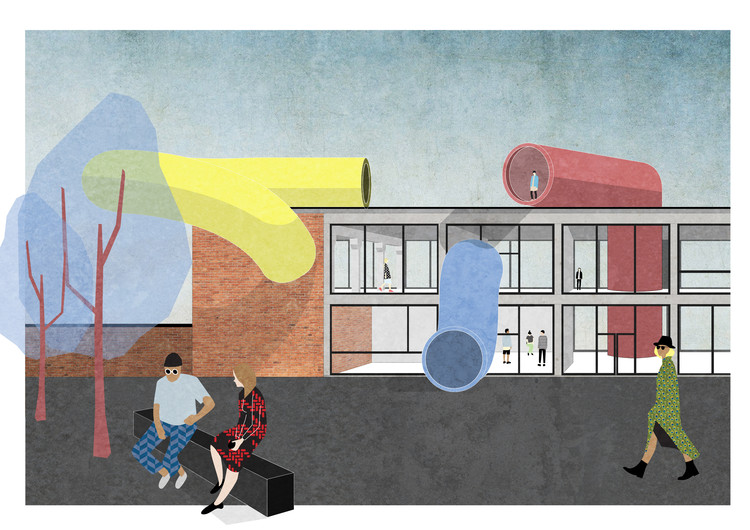 Colorful tubes populate the site of the winning entry, connecting scattered programs both physically and visually. The scheme repurposes infrastructural elements such as conduits, plumbing, and subway tunnels as organizational elements of people, creating a new industrial typology in reference to the high-tech movement.

The playfully inviting presence of the colorful tubes encourages an explorative cross pollination, enticing users to visit or at minimum, peek into the different functions both public and private across the campus and the city beyond. The vivacious character of the circulation and navigation, challenges common precepts of professionalism, making an argument for the inclusion of activities commonly perceived as leisure only, in work culture.

The second-place proposal blurs exterior and interior conditions through the implementation of mesh facades and by snaking circulation in between buildings, thereby freeing up dynamic space. A constructed tower serves as the central hub for interaction, performance, and recreation, while the saw-tooth roofs of the spaces contrast the site’s silhouette with that of the surrounding city. The proposal was also selected for the ‘BB Student Award’.

The ultimate potency of the project is its ability to both define a vibrant public space of interaction and use the blurred edges of threshold and circulation to engender a new realm for listener: a space of sound, nature, and texture both isolated and integrated into the larger project. By these means, the project unites the disparate entities of the factory buildings to create a new world within, a space for creativity and collectivity which gives primacy to neither manmade nor natural, but to both.

Emphasizing the juxtaposition of production and consumption, as well as the tensions that exist between the market and commerce, this proposal also uses color as a means of invitation. It is a diagram in essence, with adjacent programs prompting discovery and exchange through the progression of programs.

This adjacency between creative spaces of manufacturing and the continuously changing shops of the market creates a pop-up ethos, a place in which the proximity and interchangeability between maker and seller stimulates a novel type of exchange. The power of the project is in the simplicity of the interior-fit out. Through a simple use of vibrant color and unexpected program adjacencies, the proposal radically rethinks the place of transaction.

The Honourable Mentions, complete jury comments and winners’ interviews can be found on the competition website, here.

Bee Breeders have selected winners of the Stone Barn Meditation Camp competition, seeking to create a place of refuge for individuals amidst the pristine natural beauty of one of Latvia's most remote regions.

Snøhetta has unveiled plans for a new riverwalk masterplan located alongside Oregon's Willamette Falls - the second largest waterfall by volume in North America - that will open up the attraction to public access for the first time in over 150 years. 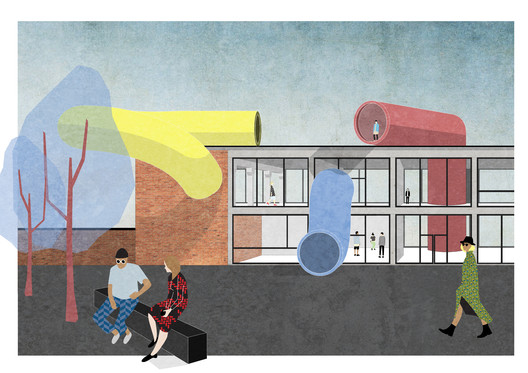