Snøhetta has unveiled plans for a new riverwalk masterplan located alongside Oregon’s Willamette Falls – the second largest waterfall by volume in North America – that will open up the attraction to public access for the first time in over 150 years. Selected to lead the project in 2015 alongside Mayer/Reed and DIALOG, Snøhetta’s scheme is the result of a 2-year design process developed as a collaboration with the city and thousands of individual community members.

The resulting plan calls for the reutilization and augmentation of existing industrial structures on the 22-acre site, giving visitors the opportunity to experience the falls and its rugged basalt shoreline and reconnecting Oregon City to its historic waterfront. 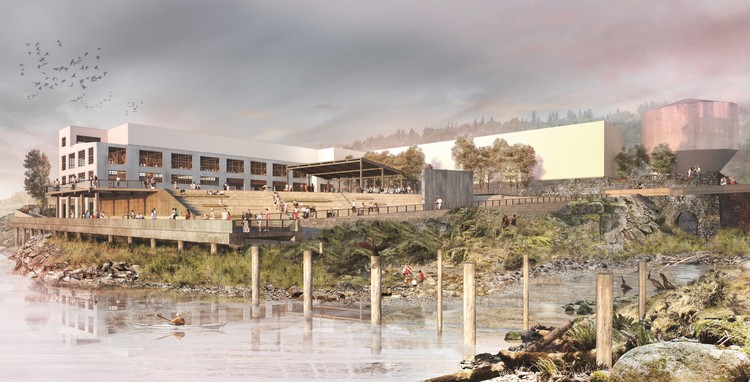 Focusing on the adaptation of existing structures, the masterplan has been conceived as a “sequence of islands” leading from the entrance of Oregon City’s historic downtown to the crest of the falls. Through careful selection and removal of industrial buildings, large portions of the site can be returned to nature – creating habitats for the diverse species of flora and fauna which call the river home – while simultaneously creating a unique visitor circulatory experience.

“The riverwalk will serve as a portal to the Northwest’s collective history, reviving a former industrial site through its aggregated layers of natural, ecological, cultural, and geological history,” explain the architects. “The new design treats the whole site as a single landscape, with a network of promenades and lofted pathways that lace through the physical strata of the site, immersing visitors in a tactile experience that celebrates the changing water level, the feeling of the spray on your skin, the dramatic play of light and the roar and presence of the falls.”

The overall plan has been divided into four core programmatic sections: The North Riverfront and Flour Mill Foundation; The Public Yard and Woolen Mill Alcove; The Mill Reserve and Mill H Overlook; and PGE Dam, The Clarifier, and The Falls Overlook.

In the North Riverfront and Flour Mill Foundation section, the section closest to downtown Oregon City, existing platforms and structures will be peeled away to expose the basalt bedrock and foundations of the historic 1890’s Flour Mill, referred to as Mill O. The Mill itself will be converted into a visitor's center with a large public hall and a variety of flexible use spaces as well as a “river theater” which will provide a sheltered place for nature viewing that doubles as a venue for concerts and classes.

On the other side of Mill O, a large raised plaza called the Public Yard will serve as “a new civic heart for Oregon City,” where a variety of events can be held, including beer festivals, food carts circles, concerts, movie screenings, or even a viewing area for summertime water sporting events when the river flows are low. The Carpentry Shop (Woolen Mill Pullery) will be preserved as a focal point of the Yard, its historic wood structure serving as an informal pavilion or outdoor stage for performances.

This section of the plan will feature access to both the lowest and highest points of the built site, providing a variety of perspectives on the falls and riverfront. The “cathedral-like” space of the boiler plant will be highlighted through minimal intervention, allowing the machinery to take center stage. Next door, Mill H will be divided into three distinct volumes:  a conifer grove, a children’s play tower, and a lower and upper level overlook structure. Both staircases and elevators will lead to all of these spaces, ensuring ADA-accessibility throughout.

PGE Dam, The Clarifier, and The Falls Overlook

The final area will consist of a series of dramatic paths suspended over the river and the PGE Dam, with the ground dropping away entirely as it leads to the final falls overlook. The paths here have been designed to reveal the full height of the falls with 360 degree views, creating a totally immersive experience.

“Collectively, the riverwalk sequence opens a new chapter in the life of the site, one that reimagines Willamette Falls in its fullest, most expansive depth in nature, culture, and time,” summarize the architects.

Construction on the project is expected to begin in June 2018. 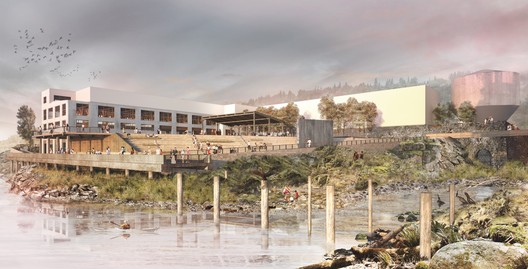