Save
How Architecture Speaks Through Cinema
Share
Or
Copy

Jean-Luc Godard, through his films, talks about architecture almost as easily as he talks about cinema itself. In honor of the nouvelle vague icon, who passed away today at the age of 91, we revisit How Architecture Speaks Through Cinema.

There are several ways of making films. Like Jean Renoir and Robert Bresson, who make music. Like Sergei Eisenstein, who paints. Like Stroheim, who wrote sound novels in silent days. Like Alain Resnais, who sculpts. And like Socrates, Rossellini I mean, who creates philosophy. The cinema, in other words, can be everything at once, both judge and litigant. — Jean-Luc Godard [1]

Within Godard's list of ways to make films, we can add another: cinema as architecture. The interaction between cinema and architecture - "the inherent architecture of cinematic expression and the cinematographic essence of architectural experience" is a complex, often multifaceted dialogue between both disciplines. [2]

Regarding the production of these two distinct "art forms", the architect Juhani Pallasmaa emphasizes that both are realized with the help of a team of specialists and assistants as a result of collective effort. However, another aspect emerges: both are the arts of the author, the fruit of a creator, an individual artist. Let us turn our attention to this and other moments in which these arts intersect.

Set construction is undoubtedly one of these moments of intersection. Allowing for great control over shooting conditions, sets built in closed studios enable the possibility of getting rid of limitations related to the climate, lighting and eventual setbacks that may occur in shooting in "real" environments. Alfred Hitchcock is an example of a filmmaker who has made extensive use of sets to create spaces of tension and horror in his productions.

Another emblematic example of the use of sets in cinema occurs in German expressionism. Films such as Friedrich Wilhelm Murnau's The Cabinet of Dr. Caligari (1920) and Robert Wiene's Nosferatu (1922) are works in which Pallasmaa says spaces and environments present a "fantastic architecture suspended between dreaming and reality." Wiene's film Nosferatu shows completely distorted architecture characterized by oblique angles and marked shadows on the surfaces of the setting, establishing the architecture as something out of touch with reality. Nosferatu's scenography replicates architectures that are realistic, however, the film's narrative charges these spaces with a dreamlike atmosphere.

The artificial spaces of German expressionism with their forced angles, shadows and perspectives generate tension and distort human perception, "oppressing the observer's own space by incorporating it into the vortex of the film." [3] Thus, films like Caligari produce entirely new spaces which simultaneously embrace and absorb everything in the scene. In these films one perceives the scenery acting as a protagonist in itself, not just as a backdrop.

To endow with a poetic value that which does not yet possess it, to willfully restrict the field of vision so as to intensify expression: these are the two properties that help make cinematic decor the ideal setting for modern beauty. — Aragon [4]

It isn't necessary to only create scenarios that simulate shadows and distort perspectives. Camera movements and specific frames can create similar effects in cinematography. “ To pre-stylize reality prior to tackling it amounts to dodging the problem," writes Erwin Panofsky, “The problem is to manipulate and shoot un-stylized reality in such a way that the result has style” [5]

Filming "real space" was the goal of directors like Roberto Rossellini, Vittorio De Sica, Luchino Visconti and Pietro Germi, who created narratives that showed the reality of Italy in the second half of the 1940s. Films, which include famous works like Rome, Open City (1945), The Bicycle Thief (1948) by De Sica and Visconti's La Terra Trema (1948), present critical views of Italy's post-war period. As Siegfried Kracauer states: urban space, with its streets and buildings, was both the site and the vehicle fuelling this social critique.

Representations of urban space, however, are not limited to Italian neo-realist films - they also make up an important part of the plot in later productions. For example, Jean-Luc Godard in his film Two or Three Things I Know About Her (1967) uses images of Paris and the transformations that the capital went through  in the 1960s: with the construction of great projects in the suburbs and suburbs themselves - as metaphor for everyday situations in the lives of some of the characters portrayed in the film. Consumerism, capitalism, and globalization appear as central themes of this story, whether referring to the city or the personal life of the women portrayed in the film. Similarly, Quentin Tarantino with Pulp Fiction (1994) portrays the periphery of a generic city as the background to a series of banal stories: unemployed people, murderers, waitresses, and roadside hotels make up a plot that fits into what could be called "dirty realism" - that can occur anywhere in the world. [6]

Dystopic visions of future cities also make up the specter of architecture's role in cinema. An example of this is the film Blade Runner (1982) by Ridley Scott, which features a fictional city (San Angeles) that is the product of a "new cybernetic society that brings together ethnicities and diverse architectural styles, highlighting the results of years of a hybrid use of often-unsupported spaces and waste generators." Their environments are dystopian manifestations of "postmodernism guaranteed by the capitalist supremacy of the postindustrial era." [7]

Metropolis (1927), by Fritz Lang is another instance of the future being portrayed as dystopia. Santos (2004) writes that "the systems’ great machine is effectively represented by an oppressive and omnipresent city, which reduces its inhabitants to mere ventriloquists manipulated by gears in a clear manifestation of the fears aroused by a new industrial city." Lang's work must be examined from the context in which it is made. Having been produced in the late 1920’s, it reflects questions about the inter-war period, when Germany suffered from the defeat of World War I and other European countries showed accelerated economic growth due to heavy industrialization. In that sociopolitical scenario, Metropolis was the possibility of a dystopian future, not as distant from reality that might conjure from other German expressionist films.

Decades later, the modern city was masterfully represented ironically in the films Mon Oncle (1958), Play Time (1967) and Trafic (1971) by Jacques Tati. Technology and modernization, embodied by the most eccentric artifacts, devices and buildings are contrasted by the symbolic figure of M. Hulot, a subject who simply does not fit into the new way of life imposed by the accelerated process of urban modernization. Out of place, he tries in vain to adjust to the new reality that promises ease and comfort, yet presents only obstacles and resistance.

Another interesting point that Pallasmaa comments would be to investigate whether cinema architecture, freed from the constraints of practical functions, constructive technology and costs "has gained some artistic advantage over the actual architectural designs of the architects of these remarkable buildings." Far removed from its concrete limitations, would the architecture of cinema have gone further than the architecture that gives rise to our physical environment? Hints of this can be seen in projects by set design architects, such as Paul Nelson's Maison Suspendue, in which "environments are suspended in a steel and glass cell like bird's nests." [8] We can only imagine what buildings these set designers would have built if they hadn’t dedicated themselves to cinema. Architect Robert Mallet-Stevens notes:

These crossovers can also occur the other way around: just as architecture builds scenes in movies, cinema can, with light, shadows, scale, and movements, construct spaces. For filmmakers with a study or academic approach to architecture, such as Sergei Eisenstein, the absence of concrete physical limitations (gravity, functionality, etc.) allows cinema to go even further than architecture (understood here as a practice of designing and constructing buildings) in terms of spatial experiments. 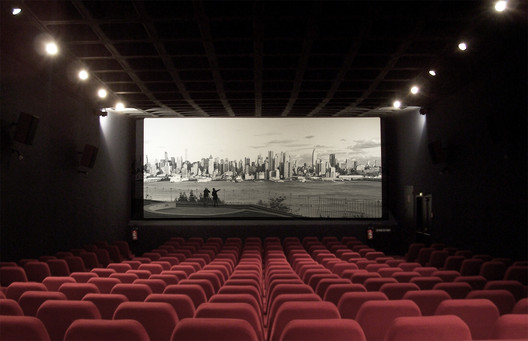