Development on the site of the former Domino Sugar factory in Williamsburg, Brooklyn is moving straight along, with today marking the launch of leasing at 325 Kent, the first building to open as part of the mega-development. Designed by SHoP Architects, the doughnut-shaped building will offer up 16-stories of modern apartment units arranged around an elevated courtyard featuring uninterrupted views of the East River and the Manhattan skyline. 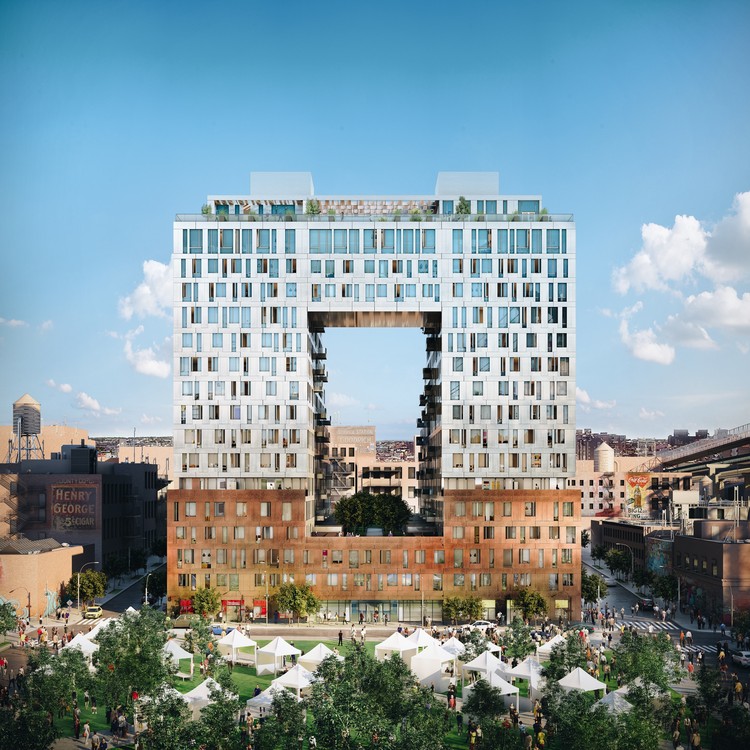 “325 Kent is the first building to open on the Domino Sugar site and with that we are delivering on our promise to bring striking architecture, affordable housing to local residents, and local Brooklyn retailers to the Williamsburg waterfront. The building features incredible outdoor space for residents to enjoy, that will complement the spectacular new waterfront public park coming to the neighborhood next summer,” said Jed Walentas, principal of Two Trees Management, the developer of the Domino site.

325 Kent will feature a total of 522 studio, one-bedroom, one-bedroom with home office, and two-bedroom units apartments, 104 of which will be marked as affordable for low-income residents. Communal spaces have been given prominence in the scheme, with over 11,300 square feet of outdoor and amenity spaces, including a 7,000-square-foot roof deck overlooking the iconic New York City bridges, and an additional 2,000-square-foot courtyard on the fourth floor. Other facilities include a health club, bike storage, a residents’ lounge, billiards, a fireplace, and a chef’s kitchen for catering.

On the ground floor, Brooklyn-staple Mekelburg’s store, bar and restaurant will occupy a 4,000-square-foot retail space. More retailers are expected to be announced later this year.

“Standing 16 stories, the sole upland parcel at the Domino Sugar site features residential floors that step up, gradually forming a visual connection between the existing neighborhood, the landmarked Refinery building, and the taller waterfront buildings slated for future construction,” explain the developers. “The striking architectural opening is capped by a three-story bridge which contains the building’s core amenities. Clad with a copper façade on lower floors and a zinc façade on upper floors, the curtain wall is perforated in a variety of patterns to create light-filled homes.”

325 Kent is part of the larger 11-acre Domino development which will contain a total of 2,800 rental apartments across four residential buildings, 500,000 square feet of office space, and a 6-acre waterfront park (expected to open in 2018). See more of ArchDaily’s coverage of the development below.

Real estate developer Two Trees Management has unveiled new images of the James Corner-designed Domino Park to coincide with the announcement of the park's opening date, slated for Summer 2018.

Last Summer, Two Trees bought the Domino Sugar Factory site in the Williamsburg neighborhood of Brooklyn to be developed into a new mix-use master plan.

Ten years after closing its doors, the Brooklyn Domino Sugar Refinery's iconic forty-foot tall yellow sign is still legible along the waterfront, even from parts of Manhattan. The refinery, built in 1882, was once the largest in the world, producing over half of the sugar consumed in the United States. 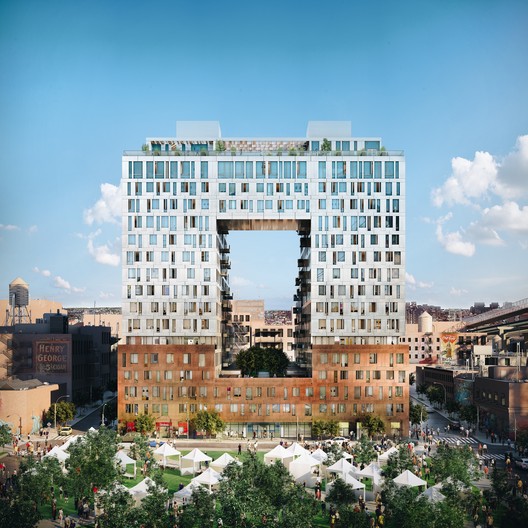