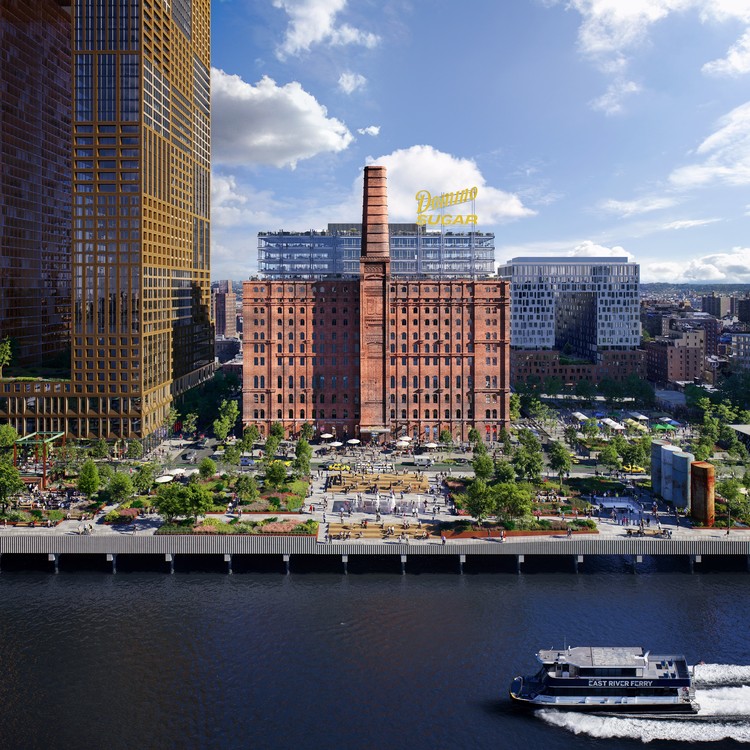 “By opening Domino Park in its entirety next summer—ahead of the site’s new waterfront buildings—we are delivering on our commitment to bring waterfront access and much-needed public park space to North Brooklyn,” said Two Trees principal Jed Walentas. “Weaving in industrial remnants of the factory, Domino Park will serve as a living, breathing reminder of the history of this storied neighborhood.”

The quarter-mile long park will feature a new waterfront esplanade, six acres of park space, and improved connectivity to between the city and the water. Several recreational areas – including sports fields, expansive lawns, gardens, and a children’s play zone – will activate the park, as well as a 5-block-long Artifact Walk, which will consist of a 450-foot-long elevated walkway along the footprint of the former sugar warehouse.

“The Artifact Walk was inspired both by the Raw Sugar Warehouse and other buildings on the site that were connected via catwalks, with the buildings essentially functioning as a large, interconnected machine,” explain Two Trees. “The Artifact Walk will incorporate large pieces of machinery from the factory, including two 80-foot-tall cranes at the north end of the walkway.”

As with the overall redevelopment plan, the design of Domino Park placed particular emphasis on historic preservation. Adhering to these principles, 21 Raw Sugar Warehouse columns, approximately 585 linear feet of crane tracks and over 30 industrial artifacts (including several 36-feet tall cylindrical syrup tanks) have been selected to be incorporated within the park’s landscape.

“We were deeply inspired by community input and the site’s rich history when creating Domino Park,” said Lisa Switkin of James Corner Field Operations. “The design of Domino Park aims to create a space that will revitalize the beauty of New York City’s incredible waterfront and foster interest in the history of the site and the surrounding neighborhood.”

When completed, the full Domino Sugar site will house an 11-acre mixed-use community containing a variety of housing, office and recreational spaces. Working with the Partnership for Architecture and Urbanism and Beyer Blinder Belle, the landmarked Domino Sugar Refinery will be transformed into a 380,000-square-foot office campus, preserving the historic structure through repurposing. Leasing for the first residential property on the site, 325 Kent, will begin in June 2017. In total, the development will add four buildings housing 2,800 new rental units, a quarter of which will be affordable for low-income residents.

Last Summer, Two Trees bought the Domino Sugar Factory site in the Williamsburg neighborhood of Brooklyn to be developed into a new mix-use master plan.

Ten years after closing its doors, the Brooklyn Domino Sugar Refinery's iconic forty-foot tall yellow sign is still legible along the waterfront, even from parts of Manhattan. The refinery, built in 1882, was once the largest in the world, producing over half of the sugar consumed in the United States. 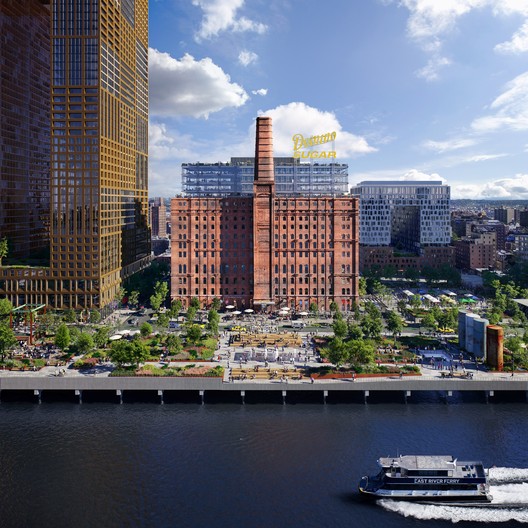