Construction has begun on the LocHal, a new mixed-use complex in Tillburg, The Netherlands. Designed by CIVIC Architects (a submember of The Cloud Collective) in collobaration with Braaksma & Roos architecten, Arup and Inside Outside, the project will be located in a former Dutch Railways hangar and maintenance facility, serving as a catalyst for the redevelopment of the city’s 75 hectare railway district. Opening up the area to the public, LocHal will offer visitors a large public hall and plaza, work spaces, conference areas, galleries, a library, a music hall and restaurant. 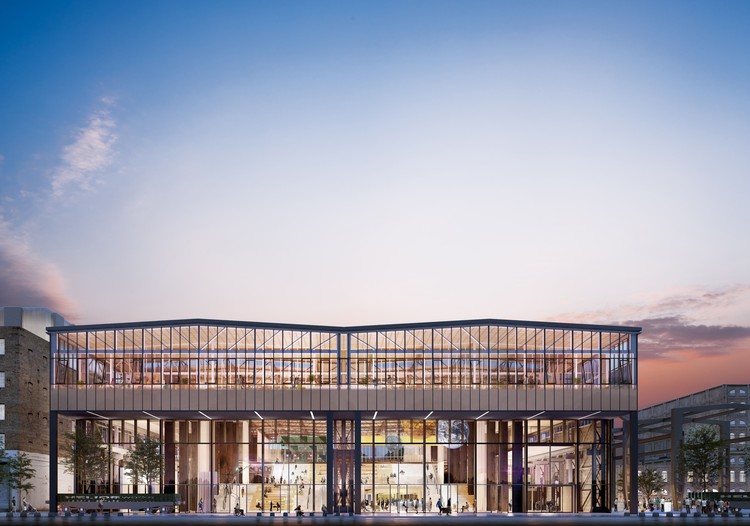 “The spatial design suits the idea of an open and productive work area. Next to ‘retrieving knowledge’ the LocHall will be equipped for ‘making knowledge’ and for co-creation,” explain CIVIC architects. “All this will happen in an open landscape of stairs and in open work spaces and studios, each with their own atmosphere. This combination of workspaces and creative rooms and studios can be found throughout the building. This will lead to a unique environment to organize affairs and business.”

The building will adaptively condition the existing hangar space, using a climate concept catered to the needs of a roofed forum, with both localized and overall strategies. A stairscape seating area will be heated and cooled, and office spaces will feature their own sub-climates, allowing for energy efficient and optimal comfort within the monumental space.

Read the full project description by CIVIC Architects below:

In the Tilburg railway zone, the construction of the LocHal took off this week. Within the contours of the monumental locomotive hall, CIVIC architects in collaboration with Braaksma & Roos Architecten and Inside

Outside, designed a large public building. The project houses a public library, workspaces, conference rooms, exposition spaces, an art school, a glass music hall and an elevated foyer overlooking the city. The building adds a contemporary layer to the ancient typology of the library. It functions as a public space where visitors can read and lend books and other media but at the same time are stimulated to collectively share and develop new knowledge.

The spatial design emphasises the concept. Large open spaces, stairs en open floors add to the value of the monumental hall and the idea of an ‘open’ library. The generous entrance in the new south facade connects the building with the most important routes in the railway zone. The visitor enters the LocHal at the large open public hall where all the functions in the building intersect. The stairs and terraces in this hall offer spaces to read and work and can also be used as exposition or performance space and debating area. With every step upwards the program and use of the space turns calmer and lighter. The public hall is flanked by two rows of impressive columns that guide the visitor through the building.

Six mobile and full height textiles offer the possibility to isolate workspaces or to temporarily transform the landscape of stairs into a theatre- or lecture hall. Spread through the building are so-called ‘’Stijlkamers”: public workspaces with a specific theme and atmosphere. The library collection is organized around these chambers. The landscape of stairs connects with the co-working centre of Seats2Meet, which is itself surrounded by meeting halls. On the top floors, the individual workspaces of the library are situated next to a 60-meter-wide winter garden (the City Balcony) that offers a view over the city.

The architectural language of the LocHal is robust, sturdy and timeless. The repetitive structure, structural clarity and robust detailing strengthen the existing architectural qualities of the industrial monument. Four materials are applied: concrete, steel, wood and glass. A new floor is casted onto the existing concrete floor and the current lubrication pits are covered with a crosscut wooden floor. The ascending concrete landscape of stairs is partially finished with wood. Steel concrete floors are visibly suspended from the old crane construction. Staircases and closed volumes are made of either structural or blue steel cladding. Higher in the building, the elements turn more refined. Light enters from everywhere. The large textiles provide the LocHal with the necessary softness and warmth. The fabrics also have an acoustic function: they make it possible to isolate a concentration space in the middle of the busy urban hall.

The design of the new architecture relates to the existing structure in size and material: smooth blue steel planes versus the existing patina of the compiled columns and crane tracks, moving textiles follow the crane rails and the wooden stairs refer to the industrial crosscut wood. The city balcony is suspended above the entrance. On this new structure, the glass façade and roof have been designed as a contemporary interpretation of the existing hall. The steel curtain wall on the ground floor is in size fully tailored to the existing railways running through the building. This curtainwall can be partially opened at specific points so railway wagons equipped with green gardens can still be driven in- and outside.

The building is open to the public 14 hours a day, 7 days a week. The opening hours and accessibility of the different functions differ. For every situation, the right accessibility can be organised. With this flexibility, a public activity in the public hall combined with use of the kitchen can be organised with the rest of the building closed off. The building is climatized locally and adaptively conditioned for mixed use. The open city hall has an intermediate climate that renders it suitable as an indoor forum, seats on the landscape of stairs are heated and cooled and the offices have their own sublimate. This creates a flexible and comfortable interior climate while preserving the monumental shell.

The construction of the LocHal catalyzes the redevelopment of the 75ha Spoorzone in Tilburg. An area in the middle of the city previously used by NedTrain for the production and maintenance of trains. The building connects and activates public roads all around. Its location in the middle of a public transport node and the transparency of its construction will turn the building into an attractive hub for sharing knowledge and information for the entire region.

In an intensive process of co-creation, the three offices CIVIC Architects, Braaksma & Roos and Inside-Outside made the architectural design. Arup was responsible for all other advisory services. Binx is responsible for engineering and construction. The library of Midden Brabant has appointed Mecanoo to provide the furnishment design. 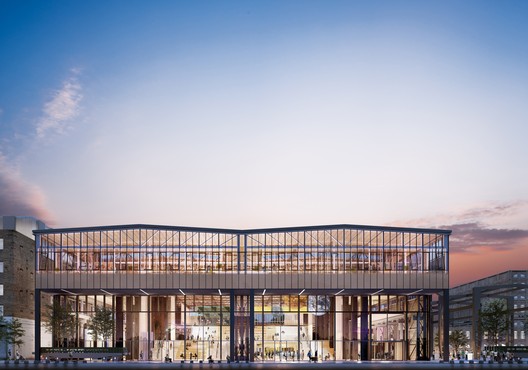