A central plinth caters to various programs for the students, such as music recording studios and rental spaces to accommodate startups, among other communal spaces. At street level, various retailers will add to the identity of High Street Bordesley.

60% of the 500 student units will be single bedrooms, while the remaining 40% will accommodate two people. An elevated park and rooftop garden will accompany the units, embodying a modern day Babylonian character.

Sustainability is another element that the project strives for, with the complex being constructed entirely from cross-laminated timber (CLT). Additionally, the project aims to capitalize on the UK’s increasingly affordable renewable energy sources including wind and solar power, which will be responsible for underfloor space heating and thermal hot water supplies.

News via: Architects of Invention.

London-based firm Tonkin Liu has released images of its competition-winning Trade Centre in Zhengzhou, China. The Cradle Towers of Zhengzhou will comprise of five mixed-use towers swooping out of a ring-shaped podium. Inspired by the nearby Songshan mountainscape, the scheme aims to celebrate the city's origins as it rockets into a high-tech future.

Share
Or
Copy
About this office
Architects of Invention
Office
••• 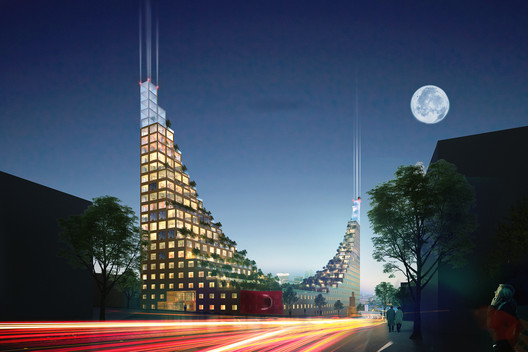