Santiago Calatrava has unveiled designs for a £1-billion mixed-use project in Greenwich Peninsula, East London. Named Peninsula Place, the 1.4-million-square-foot (130,000-square-meter) project will be located adjacent to the Roger Stirk Harbour + Partners-designed O2 Arena (formerly known as the Millennium Dome). It will include a new tube and bus station, a theater, cinema and performance venue, bars, shops and a wellbeing hub on the lower levels, with three towers rising above featuring offices, hotels, and apartments. The scheme will also be served by a new land bridge, also designed by Calatrava. 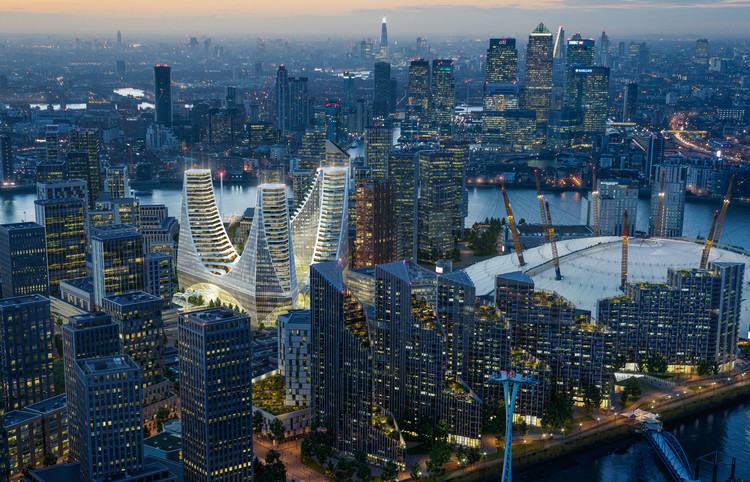 The scheme has been designed for developer Knight Dragon as part of their £8.4 billion regeneration of Greenwich Peninsula, the largest single regeneration project in London. Other firms employed by Knight Dragon to develop the area include SOM, Marks Barfield, DSDHA, Alison Brooks and Duggan Morris, whose work will add a total of 15,720 new homes to the area alongside a host of public services.

Envisioned as the "gateway" to this new area of London, at the center of the project is an 80-foot-high "winter garden" which will welcome arrivals from the new tube station, and a new footbridge will connect arrivals to developments on the rest of the peninsula. Calatrava's Peninsula Place design will combine with two adjacent buildings by peninsula masterplanners Allies & Morrison to create a new neighborhood of 800 homes, including 200 affordable homes.

"It is an honor to be designing such a piece of the fabric of London, a city I love," said Santiago Calatrava. "In designing this scheme, I have been inspired by London’s rich architectural heritage and the very special geography of the Peninsula. It will be a project that reflects both this and the ambition of Knight Dragon for Greenwich Peninsula."

"I am delighted that Santiago Calatrava has chosen London for his first major project in the UK," added Mayor of London Sadiq Khan. "This shows that London remains open to investment, trade and the very best talent from around the globe. This new landmark for London and the growth of this area of London will create a new cultural district for Londoners and visitors from around the world."