Following the success of their highly intricate Arabesque Wall, Benjamin Dillenburger and Michael Hansmeyer have once again achieved new levels of ornamental eye candy – this time, with a full-scale 3D printed grotto created from seven tons of sandstone. Commissioned by the Centre Pompidou in Paris, the grotto is an example of how the spatial expression of computational technologies can make for remarkable architectural experiences.

“Digital Grotesque II is a testament to and celebration of a new kind of architecture that leaves behind traditional paradigms of rationalization and standardization and instead emphasizes the viewer’s perception, evoking marvel, curiosity and bewilderment,” state Dillenburger and Hansmeyer. 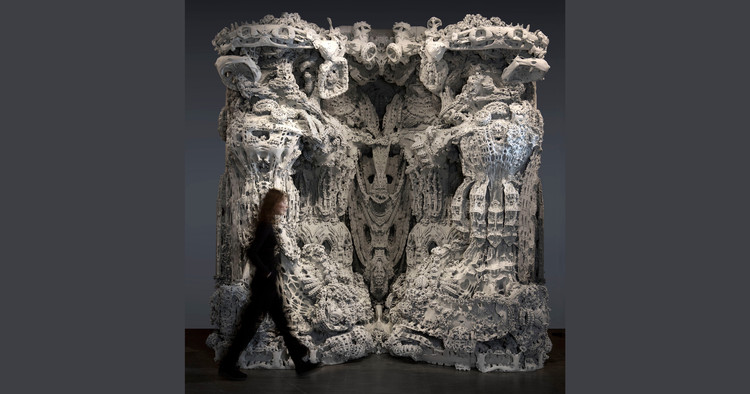 Generated algorithmically from 156 gigabytes of data and after 2 years of design development, the resultant structure is composed of 1.35 million surfaces, which form the printed sandstone. A secondary algorithm helps create the grotto’s porous and layered quality, with seemingly endless arms stemming from a single volume to create a sense of cavernous mystery.

The grotto was printed in a month and required two days for assembly. Achieving a height of 3.5 meters, the structure packs hundreds of square meters of surface into its organic forms and ornamental details.

These details are central to the grotto’s character and intentions; it elevates human perception and discovery over rational functionality, as desired by Dillenburger and Hansmeyer.

As a fictive narrative space, the Digital Grotesque project is less concerned with functionality than with the expressive formal potentials of digital technologies, explain the architects. As such, Digital Grotesque is a lavish, exhilarating space, full of details at the threshold of perception, waiting to be discovered and spurring one’s imagination of what is yet to be created.

Digital Grotesque II is one of two printed grottos, the first of which was commissioned by FRAC Centre in Orléans, for its permanent collection. Grotto II is currently being premiered at Imprimer le monde in Paris.

Learn more about the project’s process and design here.

Standing 3 meters (10 feet) tall, Benjamin Dillenburger and Michael Hansmeyer 's Arabesque Wall is an object of intimidating intricacy. 3D printed over the course of four days from a 50 Gigabyte file, the piece is a demonstration of the incredible forms achievable with algorithmic design and 3D printing - however with its overwhelming complexity it is also a test of human perception.