Standing 3 meters (10 feet) tall, Benjamin Dillenburger and Michael Hansmeyer's Arabesque Wall is an object of intimidating intricacy. 3D printed over the course of four days from a 50 Gigabyte file, the piece is a demonstration of the incredible forms achievable with algorithmic design and 3D printing - however with its overwhelming complexity it is also a test of human perception.

"Architecture should surprise, excite, and irritate," explain Dillenburger and Hansmeyer. "As both an intellectual and a phenomenological endeavor, it should address not only the mind, but all the senses - viscerally. It must be judged by the experiences it generates." 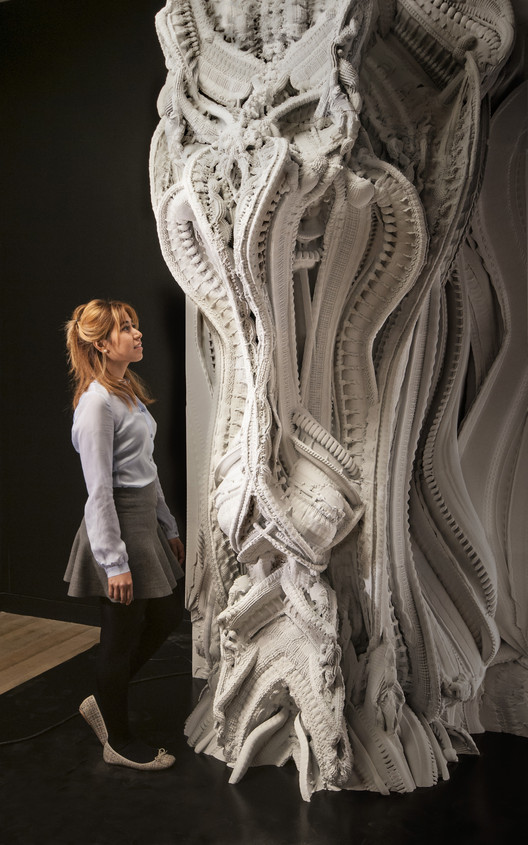 Created in collaboration with Design Exchange in Toronto for the 3DXL exhibition last month, the 0.8 ton piece composed of 12 smaller sand-printed blocks took four months to design, four days to print and four hours to assemble.

Inspired by the arabesques from Islamic art, a form of surface decoration which uses elaborate flowing and overlapping lines created through geometric rules, Dillenburger and Hansmeyer used custom software and an iterative iterative folding algorithm to create a form that contains 200 million surfaces at a resolution of just 0.2 millimeters. "Shifting the design process to this abstract level has a dramatic impact, creating a complexity and richness of detail that would otherwise be almost impossible for a designer to specify or conceive of," they explain.

Expanding on the idea that 3D printing now means that both complexity and customization are no longer expensive extras, Dillenburger and Hansmeyer explain that the Arabesque Wall "heralds a highly differentiated and spatially complex architecture in which ornament and formal expression cease to be a luxury... Freed from fabrication constraints, we can now return to design – we now have the opportunity to redeﬁne what it is we want."