Born to a third-generation family of architects, Böhm began working at his father's firm after studying engineering and sculpture at Munich's Technische Hochschule and Academy of Fine Arts, respectively. After working in Germany and the United States, and his father's later passing, Böhm took over the Cologne-based firm in 1955.

For many years, Böhm's commissions followed the legacy of his father. In this early period, which extended into the 1960s, Böhm worked exclusively with churches, as his father was a renowned architect of Catholic churches and cathedrals. But Gottfried deviated from his father Dominikus' Expressionist style, introducing formalism to the practice with clean, geometric surfaces, often rendered in red brick with small glass elements. Cones, pyramids, and cylinders stacked on top of one another create a clear and direct representation of the sacred.

At the St. Josef Church in Kierspe, Germany (1957-1959), a low, brick wall—originally made of poured concrete—frames the courtyard. The conical peak and bell tower rise above the rest of the humble structure, a motif typical of Böhm's earlier work. The church also features some of the architect's signature stained glass roses, which appear throughout many of his religious buildings.

Diminishing opportunities for church commissions through the late 20th century allowed Böhm to expand his practice to include town halls, apartments, museums, and other cultural buildings. In contrast to the brick and straightforward geometry of his early career, Böhm began to incorporate sharp edges, crystalline shapes, and new materials. Changing construction technology in Germany popularized the use of poured concrete and glass over steel frames, and Böhm integrated these into his work without sacrificing his values of humanism for inexpensive repetition. His concrete forms bring a brutalist human element to the work: they are precise but imperfect, aged in ways the architect could not anticipate.

The Bensberg Town Hall (1963-1969) is one such project. Stories of thick concrete slabs sandwich seamless glass, creating a rationalist base for the tower, which rises up in layers of spiraling windows towards a blocky crown. Its color harmonizes with the neighboring town castle, an example of Böhm's prevailing desire to create connections through time.

Check out Gottfried Böhm’s most famous work, the celebrated Pilgrimage Church in Neviges, via the thumbnails below, and more of our coverage of Böhm below those:

Gallery of Gottfried Böhm: the Son, Grandson, Husband and Father of Architects - 1 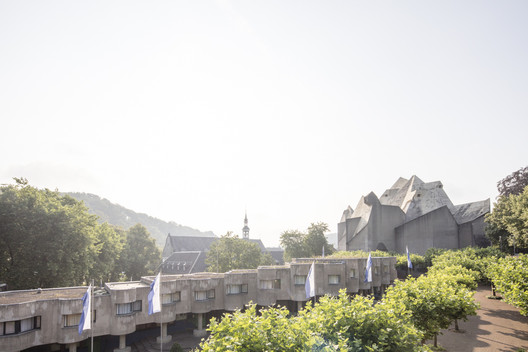