Save
Black and Gold: How Paul Revere Williams Became the First African-American to Win the AIA's Highest Honor
Share
Or
Copy

Yesterday, the American Institute of Architects (AIA) announced that they had awarded the 2017 Gold Medal to Paul Revere Williams. Despite the manic production rate of his five-decade-long career, those not familiar with the architecture of Hollywood’s early years might be forgiven for not recognizing Williams’ name. But he is notable for having designed around 3,000 buildings, for being “the architect to the stars” including, among many others, Frank Sinatra... and for being the first black member of the AIA. 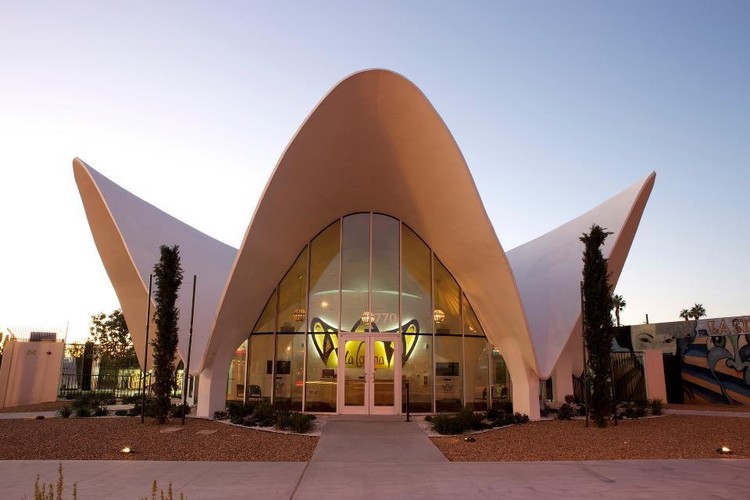 The details of Williams’ life, as an African-American providing a service to some of the richest and most powerful people in the country, are so astonishing that they often eclipse the details of his work. In learning about his life, one is likely to read a lot about how he learned to draw upside-down so that he didn’t have to sit too close to his clients, or how he defied a high school teacher who told him there was no demand for black architects. Far less common are accounts of the progression of his work from Tudor and Georgian styles, through a stripped-back “proto-modernist” style, to a more pure and even futuristic modernism later in his career. [1]

The LA Times once claimed that “If you have a picture in your mind of Southern California in the 1950s and early 1960s, you are quite likely picturing a building created by Paul Williams.”[2] However, this later period is not necessarily representative of the first three decades of Williams’ career. As noted by New York Times Magazine in 2002, “Williams was no revolutionary,”[3] and it is notable that today LA is known as much for its McMansions, those gaudy, inept imitations of Williams’ competent-yet-conservative homes for Hollywood stars, as it is for the sleek, experimental Modernism which Williams contributed to later in his career.

It could be argued that Williams’ earlier residential architecture was the result of a desire to capitulate to his clients’ whims: accounts of his career are filled with tales such as his promise to deliver a design in under 24 hours to win a commission over his white contemporaries,[4] or the aforementioned reason for drawing upside-down. Similarly, he is noted as being “excited by the new modernist aesthetic and anxious to work with it, although he would also do conservative colonial houses for clients who wanted them.” [5]

Williams’ own analysis of his design choices was even more client-focused: “When asked what was my theory of design – that I did so many contemporary buildings yet I shunned the exotic approach – my answer was, conservative designs stay in style longer and are a better investment.” [6]

Williams’ need to appease potential clients who might be skeptical on account of his race seems frequently at odds with his desire to be acknowledged for his great talent, independent of his color. The two impulses met most dramatically in a 1937 essay that Williams wrote for American Magazine titled “I Am a Negro.” Here, Williams demands that white people “deal with me, and with other men and women of my race, as individual problems, not as a race problem.” Yet he can’t seem to hold firm on his position, adding that “white Americans have a reasonable basis for their prejudice against the Negro race” and that even if people heed his earlier demand, white people and black people should remain separated in society, and “rightly so.” [7]

Fortunately, after another 20 years of demonstrating his talent, it seems Williams earned enough respect that he was able to partake in the energetic mood of the Los Angeles architectural scene in the 1950s and 60s, which so impressed the Los Angeles Times at the turn of the millennium.

But while the award given to Julia Morgan was criticized at the time for “highlighting Ms. Morgan’s achievements without reference to gender, culture, or its own history,” with one person adding that “it does speak very poorly for our profession that awarding a non-living female architect 56 years after her death is considered progress,”[8] this year the AIA has handled the situation very differently. Their press release openly acknowledges Williams as the first African-American to receive the medal, and briefly discusses the challenges he faced due to his race.

An analysis of both Williams’ professional career and the underlying social constraints resulting from his skin color show just how difficult a tightrope he was walking. Clearly, to adopt the demeanor of the abrasive visionary—in the mold of an architect like Frank Lloyd Wright—was simply not an option for a black architect working in the mid-20th century. As a result, Williams’ architecture may not be as prominent in the architectural history books as it could have been, but the AIA has done its first black architect a huge service in not only recognizing his work, but properly framing it in the context of his life.

In a 1994 article in Ebony magazine, Karen Hudson, Williams’ granddaughter and author of the books “Paul R. Williams, Architect: A Legacy of Style” and “The Will and the Way: Paul R. Williams,” is quoted as saying that she wanted her book about her grandfather to be as complete and balanced as possible, stating that she “had to accept that this may be the only book ever done on Paul Williams.”[9] In light of this 22-year-old quote, the AIA’s selection for the 2017 Gold Medal shows how far we have come in recent decades—but also how far there is still to go.