The Royal Institute of British Architects (RIBA) announced the President’s Medals Student Awards at a special event today in London. The awards, recognised as the world’s most prestigious in architectural education, were inaugurated in 1836 (making them, including the RIBA Gold Medal, the institute's oldest award). Three medals in particular—the Bronze for a Part I student (Bachelor level), the Silver for a Part II student (Masters level), and the Dissertation Medal—are awarded to “promote excellence in the study of architecture [and] to reward talent and to encourage architectural debate worldwide.” In addition to these, the winners of the Serjeant Award for Excellence in Drawing and the SOM Foundation Fellowships alongside a rostra of commendations have also been announced.

Responding to the uncertain future of traditional crafts industry in the UK threatened by the economic downturn and the rise of new manufacturing technologies, the proposal by introducing crafts workshops into a new extension of the Victoria & Albert Museum in London, tries to promote a new typology of museum building for storing and exhibiting crafts that could help bringing the lost touch of crafts back to the modern city.

‘Formless’ – An Alternative Typology for Preservation

This project takes a theoretical path in creating an alternative typology for preservation. It introduces a compromise between the desire for preservation and the cultural shift necessary for architectural expansion in the city’s future. Interpreting the concept of ‘formless’ in preservation means that architecture and heritage are no longer seen as permanent objects, but they keep transforming to re-frame their key spaces.

A Juxtaposition of Ideological Expressions: Evaluating the urban transformations of Yerevan (Armenia) during 1915-2015

What determines our sense of belonging to a territory? How can an identity be maintained, or created? Yerevan – the crown jewel and capital city of Armenia – has been grappling with these issues in a quest of rediscovering its national pride, after years of political oppression, even genocide. This dissertation explores the role of architecture in this endeavour through Alexander Tamanyan’s work, an overlooked master whose contribution forms today’s city branding…

The Serjeant Award for Excellence in Drawing (Part 1) went to Lucian Mocanu (University of Greenwich, tutored by Rahesh Ram and Tom Noonan) for New Greenwich Civic Centre: A transformative architecture. The project proposes an alternative centre for Greenwich that can be adapted for society’s needs.

The Serjeant Award for Excellence in Drawing (Part 2) was awarded to James Bussey (University of Kent, tutored by Adam Cole and George Thomson) for The Company, a dystopian graphic novel exploring architecture, isolation and Potemkin villages through the eyes ofa fictional German revolutionary exiled to the island of Helgoland.

Juries for the Medals 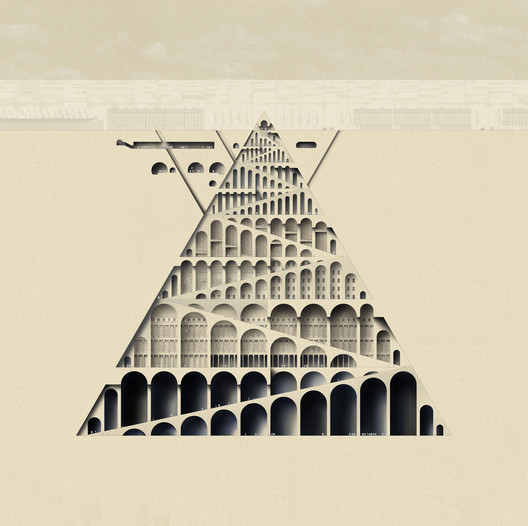