Innovative residential projects, Superkilen Park and the Amager Bakke powerplant in Copenhagen, the Google Headquarters in Mountain View in California, the Hyperloop between Dubai and Abu Dhabi, Big U and of course Via 57 West in New York, which was just awarded this year’s International Highrise Award.

It was photographed fabulously from above by Iwan Baan, as the building is just catching the day’s last sunbeams. We have just seen in the Aspekte movie how the building stands out among the structures of the Manhattan Skyline.

BIG produces images that are instantly imprinted in the brain—which is not to say that the projects are simple. Besides the fact that the activity that takes place in these buildings is complex in itself, BIG is keen to ensure that the projects are equipped with a complexity of their own. However clear the concepts may be, one always finds deviations and exceptions that enrich the Whole and make room for the Individual.

BIG is not only Bjarke Ingels. By now the office has a couple hundred employees and interesting, independently acting partners such as Kai-Uwe Bergmann and Jakob Lange. The office regularly seeks collaborations with others, including architects and artists whose way of working is completely different from their own.

For Superkilen they worked with the landscape architects of Topotek 1, the art collective Superflex, and not least with residents of the neighboring area; for Google they worked with Thomas Heatherwick, for Hyperloop among others with Elon Musk and Ove Arup, and so on.

I’m going to venture a guess—that I was invited to deliver this laudation because I wrote SuperDutch, an international bestseller on architecture in the Netherlands in the 90s, 15 years ago. As it happens, there are indeed a couple of ties that connect BIG to the pragmatic taking-the-bull-by-the-horns and the affirmation of a second modernity by the Dutch people at the time. Bjarke Ingels worked for Rem Koolhaas at OMA, for example, on the library in Seattle.

In the meantime, Bjarke and BIG have long developed further and work on projects all over the planet. Unlike architectural practices in the past, BIG has been an international practice from the beginning. They work on the big issues, challenges and possibilities of our time: globalization, sustainability, social coherence, technology and innovation.

Bjarke Ingels himself is listed among the 100 most influential individuals in Time Magazine this year. Regarding this, Rem Koolhaas contributes a text in which he identifies himself as a friend. Even more important, though, is that he emphasizes that Bjarke represents a completely new type of architect that is a perfect fit for the current Zeitgeist. "[He] is the first major architect," Koolhaas writes, "who disconnected the profession completely from angst. He threw out the ballast and soared." I have never heard Rem speak so generously of another architect.

With this characterization, it is remarkable that Bjarke Ingels is awarded the International Highrise Award here in Germany. Because here, theory purports, Zeitgeist and fear produced the utopian projects of Expressionism. Today, however, large-scale projects are sometimes considered utopian in Germany and Europe, and they produce a fear that defines the Zeitgeist.

Bjarke Ingels and BIG show that we can enter the universe of great ideas once again—actually, that maybe we have to—and that it is indeed possible that such imaginations are realized.

They shamelessly have a department called BIG Ideas.

This department, among other projects, works on the Hyperloop connection between Dubai and Abu Dhabi, where in 2020 small pods will stop for us when we want them to, and then cover the distance at a speed of 700 kilometers per hour in no time.

The quality of the projects by Bjarke Ingels and BIG in large parts does not stem from the way they look, but rather from how they are created and what they achieve.

Bjarke likes to use the term "Bigamy" for a method employed by BIG, because two sometimes well-known but entirely different phenomena are regularly brought together in order to produce something new and unknown—such as perimeter development and highrise in Via 57 West.

It is a creative process that in some ways coincides with Byung-Chul Han’s approach of interpreting a form of innovation that emerges from Shanzhai, meaning from the act of copying well-known products, whereby a sort of evolutionary process with lots of participants occurs due to misunderstandings or small improvements.

The exceptional thing about Bjarke Ingels and BIG is that one never feels like they are losing ground. Sometimes their work reminds one of Otto Neurath’s dictum that we are like boatmen who have to remodel their ship on the open sea without ever having the possibility of disassembling it in a dock and rebuilding it from the best parts.

Kai-Uwe Bergmann describes BIG and Bjarke as a "mixture of Scandinavian ‘being social’, Mediterranean verve and American Can-Do-Spirit. (...) On one hand, we are shaped by a social responsibility that is not felt in the same way in the USA,” he says, “and at the same time, on the other hand, by a ‘Can-Do-ness’ that is lacking a bit in Europe.”

These low rents at Via 57 West did not diminish, as we have just seen, the large investment in facilities that enable a communal life of which one can only dream, even in Vienna.

This is more than amazing in a city where, not far away in Hudson Yards, the starting bid for a one bedroom apartment is 1.95 million dollars.

Correction [03.11.2016]: A quotation attributed to Rem Koolhaas was misrepresented due to an error in translation and has since been amended to accurately reflect the source. 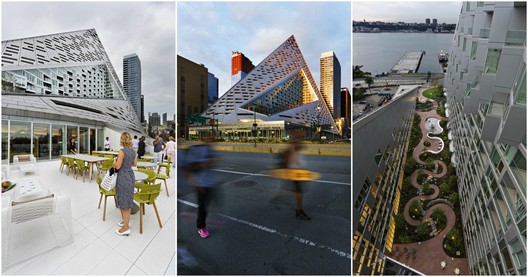