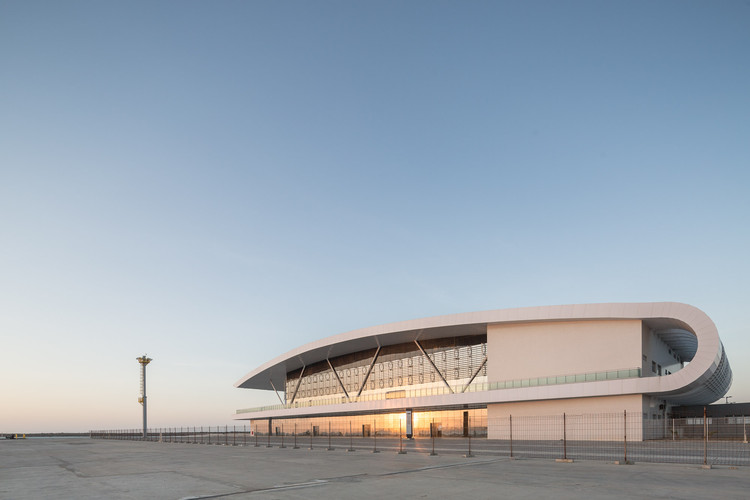 Text description provided by the architects. Architectus faced several challenges when designing a new maritime passenger terminal for Fortaleza: complying with the diverse rules of the sector; operating under a reduced timeline; attending to the needs of the building's various users; designing a building with flexible use and a striking form; and working in an area of the city with great touristic and scenic potential.

With the aim of providing infrastructure for the 2014 World Cup games that would be held in the city, the Fortaleza Maritime Passenger Terminal was designed from the beginning as a multipurpose space, taking into account both the needs of maritime tourism as well as creating spaces for events, exhibitions, parties and shows. The design also took into account the seasonality of its use as a cruise destination, with demand in the South Atlantic peaking from October to May.

The terminal’s dynamic volumes, in addition to addressing the client’s request for the formal expression of Fortaleza’s role as the first port for cruise ships coming from the northern hemisphere, are also the result of the relationship between object and observer, devised by the architects. The Mucuripe Cove, the main touristic zone of the city, has Mansa beach as its focal point, a sector that was underutilized due to being the customs area of the port, but that is now incorporated into the urban context. The city now has a view of the landscape where the terminal is located. The user becomes surrounded by three quadrants of the ocean, and can view the ocean to the east where the trade winds come from, the harbor to the west with the fishing boats and the Beira Mar skyline and the ocean where the cruise ships come from to the north.

As a result of its privileged geographic location, the terminal develops longitudinally along the new multipurpose pier, which was built partially entering the port basin, creating two facades made of structural glazing with solar control glass and brise soleils on the east and west and a large cantilevered balcony on the north side. The southern portion was designed as an element enclosed by brise soleils that surround and define the curved design of the desk and houses the service sectors, while at the same time avoiding a view of the container yard, which is adjacent to the terminal. The shape of the facility resulted from the goal of creating a simple curve that was easy to understand and could be implemented quickly in order to meet the tight deadlines that were imposed on the project.

To achieve this, a prestressed concrete structure was designed for the ground floor where the maritime operation itself consists of a main hall divided into three sections by articulated dividers. Depending on the type of cruise, the time, the operation and the quantity of passengers, all or only a portion of the lobby can be used. In front of the dock sits the customs control, while the back part contains shops, cafes and toilets. The southern portion is the circulation area, where the customs stalls and the Federal Police and immigration sector are located. This connects with the luggage storage.

On the top, in order to meet current demand, there are multipurpose areas (auditorium, cultural space, bars, restaurants) and the northern terrace. In the southern sector there are offices for various agencies and public entities, necessary for the control and oversee of the terminal and its operations. To address the large spans and the need for flexible use, the top was covered with a metal structure made up of flat trusses and a thermoplastic blanket. The structural system was developed in order to optimize the form within the curvature of the deck, with the pillars forming a symmetrical V, providing a concise and bold design. 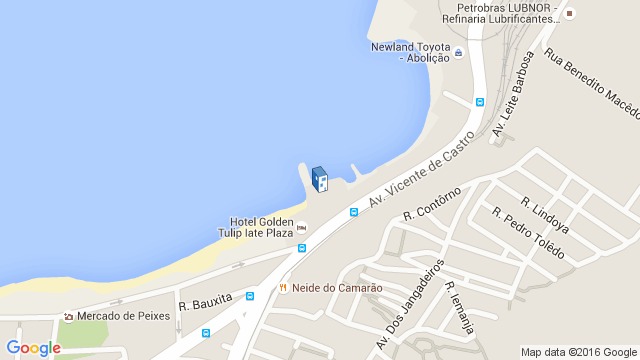 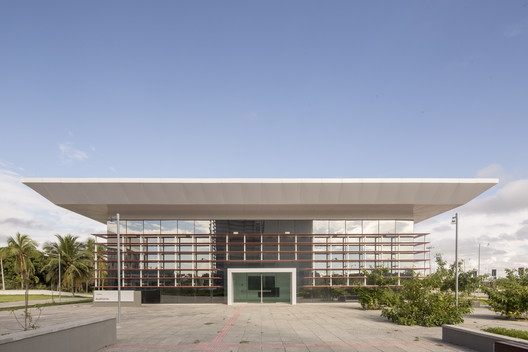