Save
A Virtual Look Into Pierre Koenig's Case Study House #22, The Stahl House
Share
Or
Copy

Without a doubt, it’s among the most famous houses in Los Angeles. The house is easy to describe: a steel framed L-plan, divided into bedrooms and the communal living spaces, all wrapped around a turquoise pool seemingly impossibly poised above the city. But words don’t do it justice. Julius Shulman’s 1960 photograph of Pierre Koenig’s Case Study House 22, perhaps better known as Stahl House, changed the fantasies of a generation.

Shulman’s photograph of, or rather through, Stahl House made plate glass and steel girders, materials normally too industrial to be accepted by home owners, seem glamorous. It was magazine genius: a vouyeristic image of two women in a glass lined room, suspended above the lights of Los Angeles, seen from outside the glass, the ambiguous perspective of either a guest leaving late, or an intruder arriving unannounced—whatever you wanted it to be. Shulman’s notorious photo is more subtle than it first appears. The architecture is not so much shown as hinted at by the geometric underside of the roof, and the city is brought closer by the careful double exposure and the reflected image of the ceiling lamp that appears like a double moon inside and outside the house. Shulman’s genius was that he understood architectural photography first and foremost in terms of film, and not least Hollywood, the dream factory down the road. Where other photographers took static descriptive images of entire houses, Shulman made film stills, frozen moments from places you wished you lived in. When printed in John Entenza’s influential Californian magazine Arts and Architecture, Shulman’s photographs worked like an intoxicant on a generation of post-war architects.

The official agenda of Entenza’s Case Study House program was to reimagine the typical family dwelling using postwar materials and technology. They were meant to be affordable, and replicable, houses for a confident democratic society. But the irony is that almost all of the case study houses were one-offs, modernist gems that were never replicated. Instead of using the best of postwar technology, the building industry used the booming market to cover America in suburban tract housing built by a deunionised and deskilled workforce. Wooden frames proved cheaper than steel, and required less skill to manage. The Stahl House represents an alternative history, a custom built precision architecture that everyone wanted but few ended up getting.

The Stahl house itself was a classic American story, a house built as much by sheer force of will as from the application of contemporary technology. The site was believed to be too steep to build upon, so the owner, C H “Buck“ Stahl, a retired professional football player, heaped up the terraces supporting the structure more or less by hand, and made models of a curving, glass walled home over a year before finding an architect with the courage to take the commission. Pierre Koenig rationalized Stahl’s original plans, but recently rediscovered photographs of the early models suggest that this is one of those cases where the client deserves credit as a co-designer.

Paradoxically, for the most glamorous house in America, it’s all about family. From the street, there’s almost nothing visible. The house presents a blank wall. The schism between privacy and view could not be more extreme. The 3D model from Archilogic shows the strong shift in atmosphere between the photogenic public spaces and the rarely photographed bedrooms, which are clearly designed to offer a feeling of enclosure, and security, in spite of the steep drop only a short distance away.

Although on July 24, 2013, a half a century after completion, the Stahl House was listed in the National Register of Historic Places, finally affording it the recognition it deserved, there’s still a strange split between the postwar houses of figures like Mies van der Rohe and Philip Johnson, and the case study houses of the Eameses, or Pierre Koenig. Whereas Mies and Johnson were drawing on an architecture that went back as far as ancient Greece, and they knew it, the Eameses breezily rejected the weight of tradition. Koenig is a more ambiguous figure. He built, and he taught, for most of his life. He was fascinated by the properties of steel, and he did idealistically motivated work—notably with the Chemehuevi indians when he taught at USC—but nothing ever brought him the fame and recognition of the magazine friendly pieces from early in his career.

So how much does it cost to live in a modernist masterpiece?

Well, Buck Stahl paid the outrageous sum (for the 1950s) of $13,500 for the land, and another $37,651 for the house and pool. At the time of writing, Zillow estimates the value of the house as $2,531,800 (or between 2.23 million and 3.11 million), Trulia’s algorithms estimate its value slightly lower than average for a Hollywood property, at $2,237,000, and Realtor guesses $2,042,328. The real value of the house is almost certainly higher, much higher. A story in the Los Angeles Times (June 27, 2009) reported that Stahl’s widow, Carlotta, and their three children turned down offers as high as $15 million for the house since Buck passed away, but whatever the offer was, the family didn’t sell, so the house is effectively priceless. That’s quite a premium for great architecture. 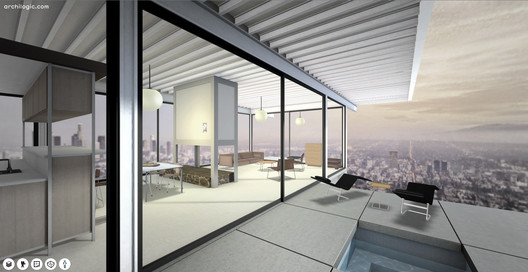