Save
A Brief History of Rome's Luminous Rotundas

With its hundreds of churches, Rome has a developed a rich history of domes. Inspired by this heritage, Jakob Straub has photographed the city's most remarkable rotundas from the ancient Pantheon up to Pier Luigi Nervi's modern sports arena. His neutral photo perspective, taken looking upwards from the center of the rotunda, opens a new view for the underlying concepts where the architecture yearns for the firmament. For Elías Torres, these “zenithal-lit” spaces constitute an important method for daylight architecture, where the exterior is also transformed into a fascinating distant reality.

Torres has analysed numerous strategies for lighting architecture effectively with daylight from above. In his book “Zenithal Light,” illustrated with an abundance of striking photos, he came to the conclusion that “Amongst the representations of the sky in the interior of architecture, the one that depicts the sun shining from above with a circular form has been the favoured one for many cultures.”

The Pantheon (126 ad) in Rome has set the benchmark for windowless spaces lit only by zenithal light – detached from the city around. The nine-meter open oculus clearly attracts the attention of the visitors. During the course of the day the harsh beam of sunlight moves majestically from the dome to ground. Originally the dome was decorated with golden stars upon coffers with a blue background, but today’s nakedness brings the play of light and shadow more to the foreground.

Almost two millennia later, even though Pier Luigi Nervi and Annibale Vitellozzi created a closed rotunda with a lantern for their Palazzetto dello Sport (1956-1958) the dome rebuilds the sky here as well. The central circle represents the sun and grants a floating lightness to the lantern. The constructive engineering is elegantly transformed into a sophisticated shell of sun rays enclosing all spectators.

The rotunda of San Bernardo alle Terme (1598) seems to be similar to the Pantheon. However, this church does not have an open oculus to the sky; a lantern with windows on top of the dome is the only daylight source for the church. The nine rings of octagons - decreasing in size towards the oculus - generate a strong spatial perspective with their distinctive pattern of light and shadow.

Conversely, the luminous dome at the Casa Madre dei Mutilati (1924-1936) appears as a direct counterpoint to the Pantheon: The opaque “oculus” is set against translucent glass rhombi that dissolve the solid dome. The rotunda emerges, less tectonic but more floral and light, as thin lines on the glass elements underline the delicate aesthetic.

Further, the symbolic representation of the firmament adds a spiritual dimension to these domes. The church of San Teodoro al Palatino (1703-1705) with its pastel blue creates a direct link to the clear sky at daytime. However, the dark blue of San Gioacchino (1891-1898) performs as a canvas for the night with golden shimmering stars. Here, the zenithal sun image with the rays of light pierce into the starry sky and induce a simultaneity of day and night.

In contrast, the earlier Santa Maria di Loreto (1507-1582) embodies a much more figurative and ornate approach. Angels and saints rest on clouds on a warm golden background. The dome's eight ribs appear as powerful rays of the central sun image.

Jakob Straub has photographed all these rotundas for his book “Roma Rotunda” using a medium-format analogue camera with various exposure times to eliminate the effects of light and shadow. The digital photo process thereby led to a flattened and neutral perspective to focus on the different concepts of the architecture.

Light matters, a monthly column on light and space, is written by Thomas Schielke. Based in Germany, he is fascinated by architectural lighting and works for the lighting company and academy DIAL. He has published numerous articles and co-authored the books “Light Perspectives” and “SuperLux”. For more information check www.arclighting.de or follow him @arcspaces. 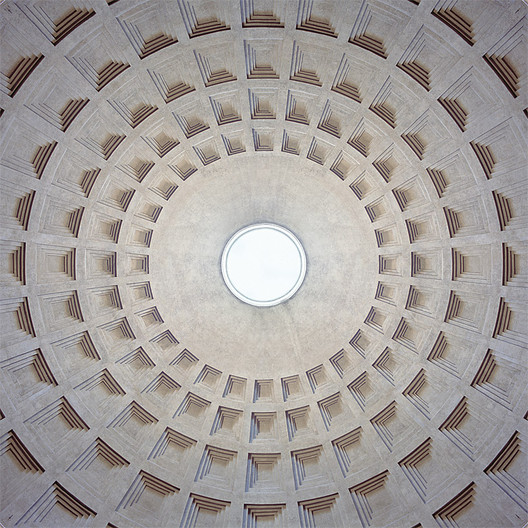