Leveraging the strength and range of motion of a robotic arm, the pavilion was printed in three dimensions with an experimental extruder, resulting in a structure composed of 94 unique modules that capture energy during the day, and shine at night. After their initial function, the plastic modules making up the pavilion will be completely crushed and reused in a new structure. 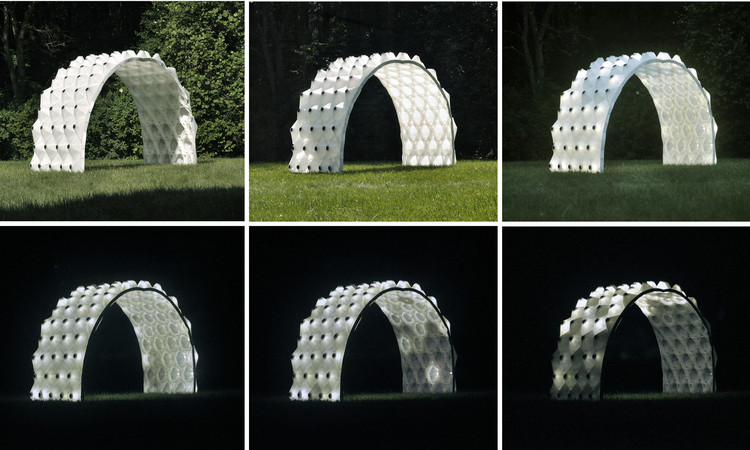 Description from the architect.
Background

Currently, several architects and engineers around the world are creating large-scale 3D printers in order to produce large-scale structures. They are utilizing various 3D printing techniques and exploring different materials, such as concrete, adobe, artificial stone, and plastics. At the same time, there is an emerging, alternative approach to 3D printing architecture that is inspired by an ancient building component, bricks. Smaller machines are utilized to fabricate smaller building blocks that are assembled to form a larger structure, a technique that helped drive this research project.

The overall form of the pavilion follows the form of a catenary arch that is then extruded to create a barrel vault. The vault is then slightly skewed from north to south to help with the overall stability of the pavilion. The vault was then positioned to follow the path of the sun, spanning from east to west to maximize solar exposure for the solar powered lights. The final pavilion is constructed out of 94 unique hexagonal modules that each have an integrated solar powered LED at their peak. The modules were 3D printed with translucent plastic, allowing the structure to filter sunlight during the day and create a uniform glow at night. The light effect is enhanced by the use of interlocking, dove-tail joints that reduce the visual division between each module, which ultimately creates a lightweight structure, both visually and structurally.

The modules were 3D printed with polypropylene plastic filament using a DOHLE hand welding extruder, the Mini CS, which was attached to a KUKA Agilus and utilizing a FDM style printing process. The modules were printed with a continuous extrusion; material flowed from the print head without stopping and starting, following a series of vertically stacked printing paths composed of polylines.

The module design includes an integrated solar powered light that is comprised of a small photovoltaic panel, rechargeable battery, LED light, and light sensor. Each solar cell acts independently, capturing and storing energy as well as sensing light levels for each individual LED, leading to an autonomous system that reacts to its isolated solar conditions. This creates a recording of the sun’s exposure over the course of the day that is then reflected at night as the LEDs light up. For example, if it is cloudy in the morning and clear in the afternoon, the pavilion’s east side will be illuminated for a shorter period of time than the west side, reflecting those environmental conditions. The solar powered LEDs are installed at the central peak of each module to evenly disperse light within the interior of the module and add to the glowing effect of the pavilion.

Now that the pavilion has served its purpose as a temporary shading device during the day and a beacon at night during public, outdoor festivals, the project is continuing. The next phase of the project is to shred the modules into small pellets and then directly feed them into an extruder that prints with recycled plastic. The intent is to recycle the pavilion, 3D printing a completely different structure using the same plastic. This offers an interesting approach for temporary structures, while also taking advantage of the material properties of plastic. We plan on fabricating a larger structure with a similar set of goals, but apply knowledge gained during the design and fabrication of the Solar Bytes Pavilion.