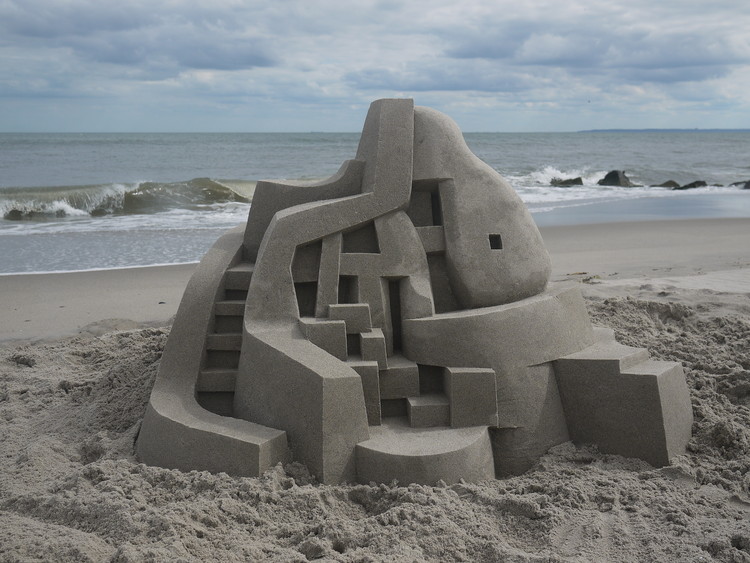 Up against wind, waves, passers-by, and seagulls, Seibert begins his sculptures without many plans:

“Once I begin building and forms start to take shape, I can start to see where things are going and either follow that road or attempt to contradict it with something unexpected. In my mind they are always mash-ups of influences and ideas. I see a castle, a fishing village, a modernist sculpture, and a stage set for the Oscars all at once. When they are successful they don’t feel contained or finished. They become organic machines that might continue to grow and expand. I am always adding just one more bit, and if time allowed, I wouldn’t stop.”

ArchDaily: For how long have you been creating these sandcastles?

Calvin Seibert: I first got started as a boy in the sand piles of construction sites near my home. I had seen the Eero Saarinen TWA terminal at JFK and was making all sorts of swooping shapes. That was 50 years ago (I'm 57).

AD: Do you have any sort of background in architecture or design? How did you start creating these sculptures?

CS: When I was young I thought I would become an architect. It was only along the way that I came to understand that I was more interested in foundations and framing and the early stages of construction for its sculptural qualities and less interested in finished buildings. I attended art school in New York. My teachers included Alice Aycock, Joel Shapiro, Jackie Winsor and Barry La Va.

AD: How do you come up with your designs?

CS: I always try to make something I haven't quite made before, though I would like to go back and refine an idea with a second version I never quite do that.  I make sketches over the course of the year but only have them in the back of my mind when I get started. There are no plans and the building process can take some quick turns along the way. This is often due to the initial scale decisions.

AD: How do you find points of inspiration for your designs?

CS: I look at a lot of art and architecture. George Grosz painting to Paul Rudolph buildings. I'm an architecture tourist. My days in a foreign city are mostly in pursuit of architecture. My tastes are rather particular; I'll walk past the Sagrada Familia in Barcelona, look up, but then head off to an abandoned brutalist power plant.

AD: What is the most challenging part of building a sandcastle?

CS: At the end of several days of carrying water (as much as 150 gallons per castle) the carpal tunnel in my right hand starts to bother me so I switch to my left. In crowds, making eye contact with parents. Most kids are very well behaved, but a few have no boundaries. I also don't turn my back on seagulls.

AD: How do you feel about the temporary nature of your work?

CS: I have no problem leaving the castles. In a place like Coney Island they will be gone in minutes. On Jones beach they are often there a day or two later and I can take pictures in morning light.

AD: Have you ever worked with other forms of architecture, art, or design?

CS: In the winter I build architectural sculptures with found cardboard, Trader Joe bags "paper please" and Elmer's Glue. They are painted various shades of dark gray. They also do things that can't be done in sand. Small and cantilevered details.

Check out more of Seibert’s work in the gallery below, or on his Flickr page. 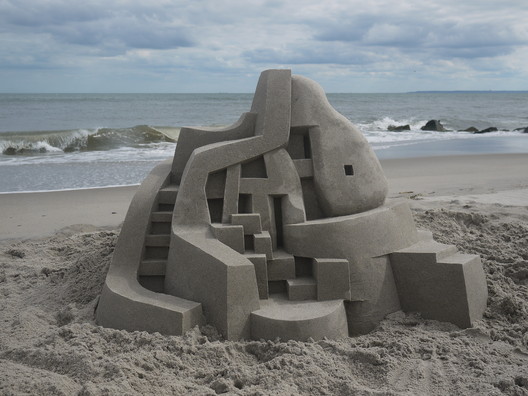