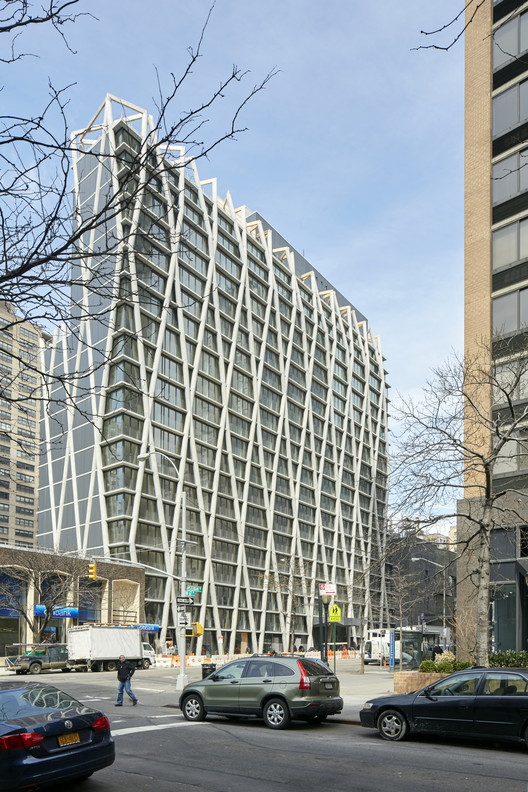 Text description provided by the architects. Our client wanted a solution that maximized floor area on a long narrow site on the Upper West Side of Manhattan. They did not want an all glass building, but wanted the benefits of large windows without compromising energy efficiency.

Creating a new terminus for W68th Street, 170 Amsterdam sits between Central Park to the east and the landscaped open space of the Lincoln Towers superblock to the west. The building’s architecture and the exoskeleton that defines the exterior is derived from its location between these large green spaces and its immediate context. The intersections of the structure rise to the top of the building at different heights, giving the appearance of a façade in motion while also allowing for the prefabricated fiberglass formwork to be reused with the concrete cycle. Moving the structure to the outside of the enclosure freed up valuable interior space that would have been occupied by columns and the projecting slabs and columns provide a veil over the all glass façade and act as a shading device. The deep façade of the diagrid connects with the muscular buildings of lower Amsterdam Avenue, Lincoln Center, the Upper West Side and iconic Chicago architecture. At ground level, the columns create a dynamic street wall, with the exposed structure angling into the sidewalk and piercing the solid form of the building canopy. At the top, the building’s volume ends while the skeleton continues, creating a structural canopy for the rooftop spaces. Inside, the exposed concrete columns angle through the public spaces of the building piercing the floors and walls of the lobby, common rooms and corridors, and disappearing into the ceiling above. In the apartments, seeing the structure through the floor-to-ceiling glass has the effect of being suspended in a treehouse, held up by the branches of the building’s exoskeleton.

The concrete used to create the exoskeleton is the result of a specialized mix that gives the material the appearance of limestone, a nod to the buildings in the Lincoln Square neighborhood. The formwork for the round, crossed column shapes involved an intricate fiberglass system with multiple units that were tightly connected together to achieve maximum reuse and economy. The form system and the reinforcing were designed so a pump-placing tube could be inserted into the crossed shapes, which achieved a smooth and consistent surface without blemishes or discoloration. Using a small aggregate mix enabled the concrete to be placed into the blind areas of the formwork with no vibration. The concrete mix was a dense, high fluid self-consolidating mix, using grey cement and slag to achieve a light grey finish and meet LEED standards. 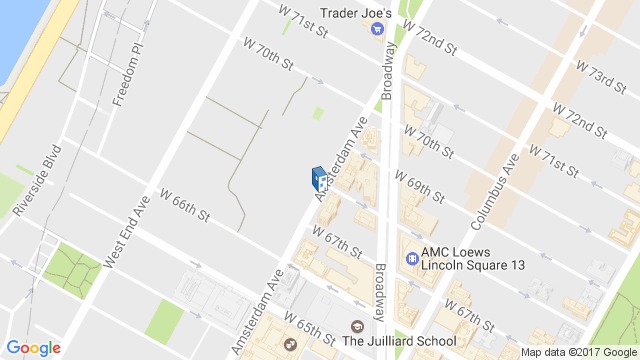