Allies and Morrison, together with O’Donnell + Tuomey and Josep Camps/Olga Felip Arquitecturia, has been chosen ahead of David Chipperfield, Feilden Clegg Bradley Studios and three other teams to design London's Olympicopolis culture and education quarter. The major commission, which will be sited at the gateway to the Queen Elizabeth Olympic Park along the Stratford waterfront, will include new buildings for the Victoria and Albert Museum, Sadler’s Wells, the London College of Fashion, and potentially the Smithsonian Institute's first permanent museum outside the US.

"Cultural and educational buildings and the public realm have been the critical purpose of our practice for more than 25 years. It feels like all our work has been leading towards this extraordinary commission," stated Sheila O’Donnell and John Tuomey. "And we’re happy to be back again in London where we began our careers in architecture. We greatly look forward to collaborating on the creation of an exciting urban quarter in this new part of town."

Allies and Morrison and O’Donnell + Tuomey's team, which also includes Buro Happold, Gustafson Porter, Charcoal Blue and Gardiner and Theobald, was selected from 43 submissions in a competition organized by the London Legacy Development Corporation and Malcolm Reading Consultants. 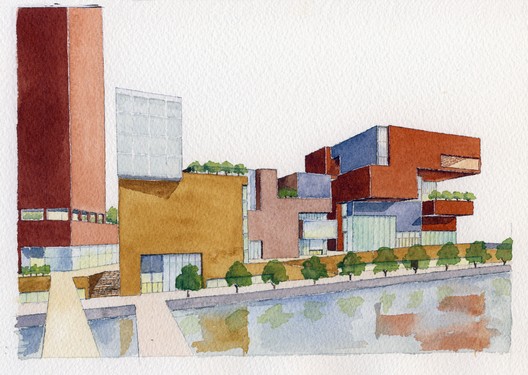