Save
Light Matters: Heightening The Perception Of Daylight With Henry Plummer (Part 2)
Share
Or
Copy

Architecture professor and photographer Henry Plummer has heightened the transformative power of daylight with his cameras and published several remarkable books about light and architecture. His deep interest in light, and his lyrical writing perspective, were formed through his contact with the designer and art theorist György Kepes while studying at MIT. Within his numerous photo journeys Plummer has documented the various facets of daylight in Japan and the Nordic Countries, and of masters like Le Corbusier and Louis Kahn. As a Professor Emeritus of Architecture at the University of Illinois at Urbana-Champaign Plummer also still has ambitious plans for future book projects. In the second part of this interview, Plummer reveals how changing technologies have affected his photography, and discusses his thoughts on phenomenology and developing a poetic language of light.

If you missed it, you can read part one of this interview here. 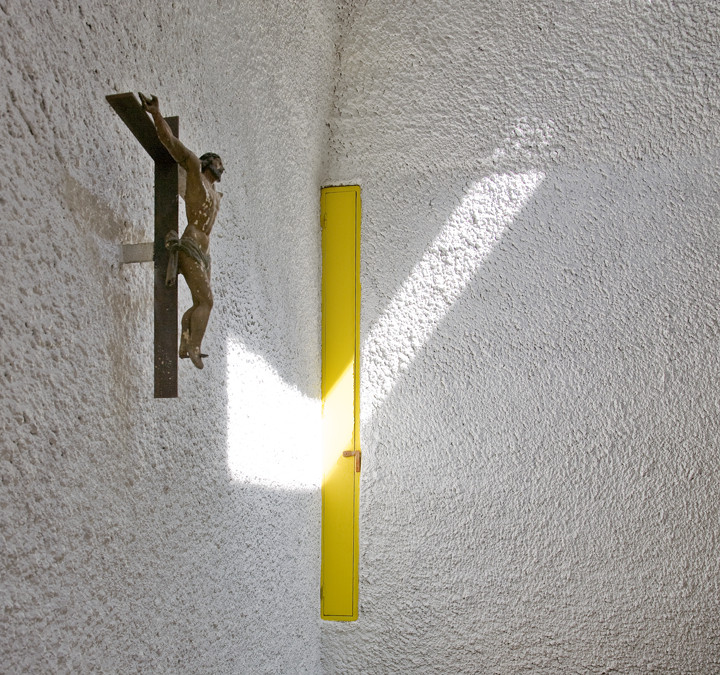 Thomas Schielke: What kind of equipment and software do you use and how has digital photography changed your work?

Henry Plummer: While I hesitate to answer this question, for I believe that what is essential to photography is the images created rather than the tools employed, I understand that these tools can affect how one sees through a camera, and influence the shape and quality of images.

My own camerawork has changed greatly over the years. When beginning to seriously photograph architecture, in the early 1970s, I was using a 4x5 view camera, and would process film and make black-and-white prints in the darkroom. I loved the rituals of this medium, and its potential to slightly abstract reality and render it more evocative, so as to open up additional room for the imagination. But a growing interest in the mood and character of natural light, which stem from its subtle hues as well as monochromatic effects, led to a gradual shift to color film. Furthermore a view camera and the weighty paraphernalia it requires became an increasing burden with age and the need for mobility during travels.

From the mid-1970s and for almost four decades I worked primarily with Hasselblad and Leica cameras, and did so until around 2009 when the decreasing availability and reliability of color processing labs, not to mention a growing inconsistency of transparency film, led to the change, much regretted at the time, to a digital format. The camera I use at present is a Canon 5DIII with a variety of lenses, and while I miss the physical presence and luminous depth of film, I am finding a new kind of joy in the creative control possible with digital media, not only when taking photographs but also when processing them with the computer and software such as Photoshop and Bridge—in what is now a lightroom rather than darkroom.

TS: How have you developed your characteristic poetic language to describe the atmosphere of light?

HP: Writing about something as slippery as light has always, for me, been very difficult, and hindered further by the limited range in my native language, English, of words that convey the nuances and behavior of sensory phenomena. Compounding this communication problem is the dilemma of trying to understand and discuss the most immaterial aspects of architecture, not to mention a human experience that goes beyond words—for light touches depths that are perceptual and psychological, emotional and spiritual. One must continually resort to circling around and indirectly approaching a subject that eludes spoken or written language, and is constantly slipping away from being too clearly grasped or examined.

My initial attempts to write about light were helped immeasurably by Kepes, and his encouragement to speak directly about its fluid behavior and sensory impact, but also his advice on reading a wide range of literature on the nature of light: writers such Marcel Minneart, John Ruskin, Junichiro Tanizaki, Johann Wolfgang Goethe, Sir William Bragg, László Moholy-Nagy, Wallace Stevens, Gaston Bachelard. Of course Kepes himself wrote elegantly about light from the standpoint of both art and science—about the phenomena we see and experience, as well as the modulations that produce them and sensory systems that process them—a range that offered a model for approaching similar phenomena in architecture.

But to return to your question, I don’t know how one could have any intention of coming to grips with this intangible subject without resort to poetic language, since the truly human aspects of light lie beyond the detached gaze of scientific thought and the objective mind. Our most fundamental experiences of architecture, as with life itself, can be felt but not thought—love and hate, joy and sorrow, wonder and fear, pleasure and pain, happiness, exhilaration, awe, desire, hope, compassion. Poetry provides access to these feelings. By poetic I do not mean a search for beauty or flowery language, but a method of stepping up the intensity of experience as a more sensuous world is opened up for us, one in which we are allowed to imaginatively participate. Fundamentally poetry expresses more, and says it with far more intensity, than ordinary language. Whereas prosaic language communicates information and serves practical ends, poetic language deepens our perception of life, and serves to broaden and sharpen our sense of existence. While this kind of writing is bound to fail in many respects, I believe the struggle is needed for anyone wishing to explore aspects of light that lie beyond foot-candles and lumens.

TS: Why do you focus so much on the phenomenological dimension of the projects in your books?

HP: My primary interest in light is its human experience, and how this encounter can enhance our sense of existence—how light can create a realm in which, apart from any other purpose, it is a pleasure “to be” and where one feels an increase of life. I am less concerned with utilizing light for practical ends, as for example exploiting it as a source of energy or task illumination. My attention has been aimed instead to our immediate relations with light itself—how it helps us feel more incarnate as it enlivens and invigorates our built world, how it imparts emotional and spiritual depth to buildings through moods that resonate deeply within us, and how its mutation with the hours and seasons presents to us a kinetic image that parallels our own bodily rhythms. I am especially fascinated with how light is able to heighten the existence of architectural form and—magically—make it momentarily radiant and vibrant, eliminating the dualism of object and subject, and permitting a direct association with the world—a world that for a time is no longer a thing, but a You.

Phenomenology is central to this pursuit, for it implies a way to focus upon our direct encounters with phenomena as they show themselves to us, but also on a way to describe the essence of those phenomena as they are given to our consciousness. The accuracy of this process demands that the mind be cleared of all preconceptions and prejudices, and go straight to the phenomena themselves.

But I don’t think phenomenology is the sole answer to understanding light, for as architects we need to also comprehend how light can be shaped and managed through time by specific building forms. I think it is useful, therefore, to complement phenomenology with a more rational process, allowing us to question how phenomena come into being through an interaction of sky and building, as the ebb and flow of incident light is guided by architectural openings and volumes, colors and textures. This quasi-scientific knowledge depends on a careful investigation of how light phenomena were shaped in the past, through traditions handed down to us by our predecessors, as well as how the phenomena we love can be authentically formed and recreated in the future.

TS: How have you taught light and lighting at the university? Which strategies have you included to train students in light phenomena in contemporary architecture?

HP: My university courses on light in architecture were of two different kinds: studios and seminars, the former more experimental and the latter more analytic.

Studio classes were organized around a main project—such as a museum or chapel, house or monastery, cemetery or spa, street or plaza—whose design could center upon and be fueled by the orchestration of natural light. Preceding this project was an exploratory phase to investigate the basic methods of manipulating daylight, studied through drawings by hand but primarily through models that actually modulate light. This often resulted in experiments and discussions taking place more around studio windows than desks, and often outdoors, allowing students to immediately see and learn from their experiments, but also offering a way to concretely discuss and critique the phenomena produced. Photography was central to the process, as a medium to document and share each construction of ephemeral light. It was also a means to present the lightwork in design reviews, since students could not count on a daylit review space or desirable weather on review days.

My graduate seminars on light centered on modern and contemporary architecture. Classes were organized around lectures and group discussion, and the presentation of student observations and research on the treatment of light by selected architects. Lectures were aimed to establish an overview of contrasting cultural approaches to light, as well as different ideas and sensibilities that underlie the control of daylight by leading architects. Additionally the lectures provided a demonstration of how light qualities in buildings could be examined, recorded, presented, and discussed—activities that are not usually a part of university curricula or student discourse. The analytic studies that followed focused on the direct experience and photography of nearby buildings in the university and region, but also on analyses through library research of more distant and less accessible masterpieces with light.

TS: What are your future plans as a Professor Emeritus?

HP: Although I miss teaching, especially the stimulation of working with curious and enthusiastic students, the year-round time that I now have available to dream and think, write and photograph, and to travel free of academic schedules, has opened up a new way of life and the chance to complete projects that for decades lay unfinished in my files or imagination.

There are a number of future book projects related to light that I am working on. But I also have an interest in architectural subjects unrelated to light, centering on existential aspects of “place” and the fundamental ways in which people relate to and identify with the physical world. These are also subjects about which I have written in the past, and around which I developed university courses.

At present I am completing a book on architecture and human agency, examining the way building forms can either sustain or deny our basic human need to choose our own courses of action in space, and to make our own decisions in buildings rather than having those decisions made for us in advance. Through its abundance or scarceness of spatial choices and opportunities we care about, the physical environment tends to either empower us to act in space or refuse us this basic kind of freedom—either allowing us to be in control of ourselves, or dooming us to be under the control of others. At stake is our basic sense of dignity and responsibility as human beings.

Light matters, a monthly column on light and space, is written by Thomas Schielke. Based in Germany, he is fascinated by architectural lighting and works for the lighting company and academy DIAL. He has published numerous articles and co-authored the book “Light Perspectives”. For more information check www.arclighting.de or follow him @arcspaces.