Save
Where the Real Skyscrapers Are (Hint: North Dakota)
Share
Or
Copy 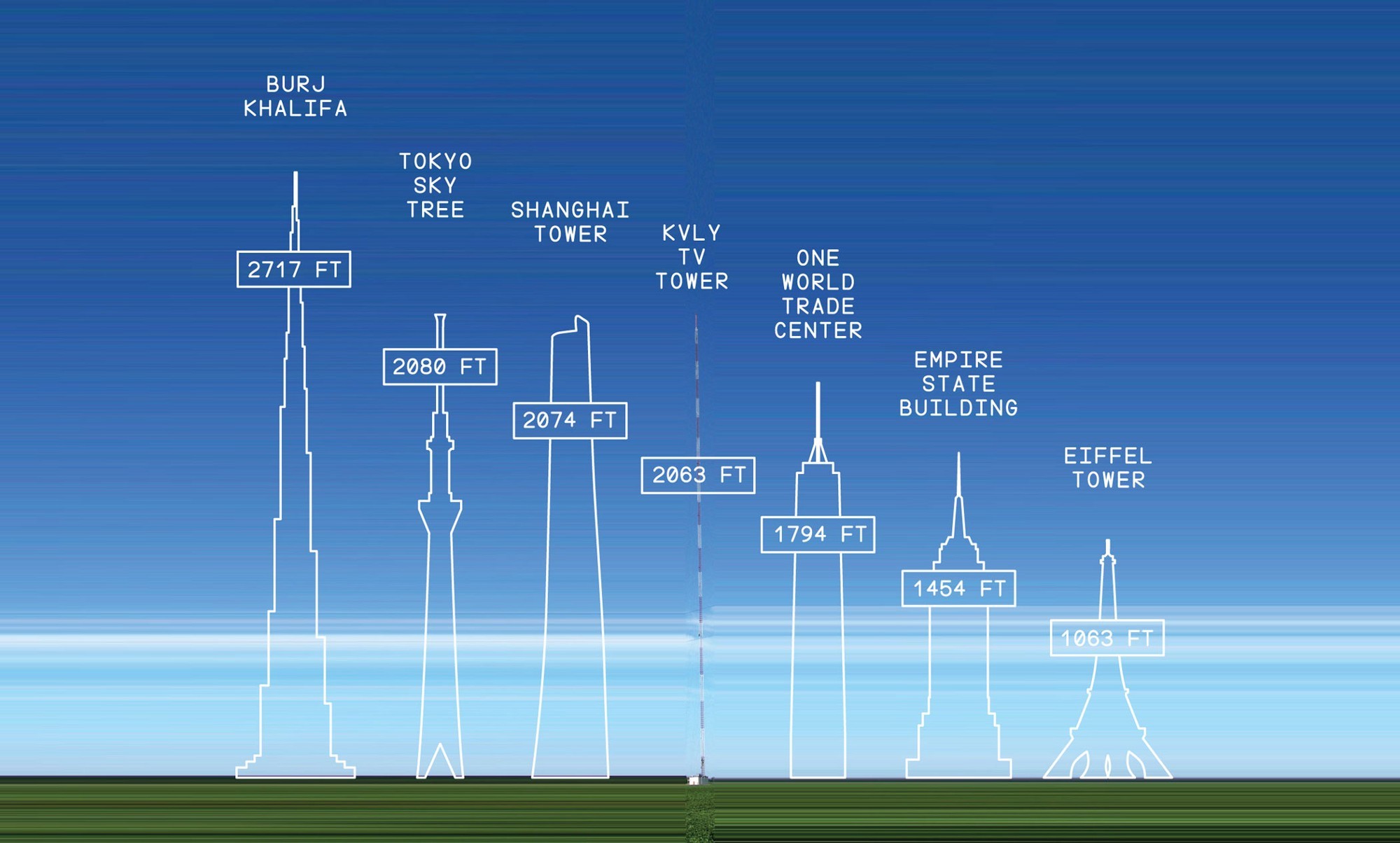 Or the Diversified Communications Tower in the unincorporated community of Floyd Dale, South Carolina. At 2,000 feet (609.6 meters), it’s close to double the height of the Eiffel Tower.

Around the country, TV broadcast towers like these, unheralded but sometimes record-breaking, keep millions of Americans connected. And as the way we watch TV is changing, the industry behind these towering structures faces turbulent times.

The KVLY tower rises out of the flat countryside like a needle. It’s so narrow that it’s just a vertical line on the horizon until you get close up. Built in 1963, it was the tallest structure in the world for many years.

“Our population isn’t exactly very dense out here, so you need to cover a large area to get to enough people,” says Doug Jenson, the chief engineer at the NBC affiliate that broadcasts from the tower. Blanchard, North Dakota is “just a little blip on the road,” he said.

An elevator goes up most of the way to the top.

“You can see quite a ways out on the prairie, and although it gets kind of misty on the horizon, it’s pretty awesome,” Jenson says. “Especially when you have another 2,000-foot tower you can look at.”

That’s right — five miles away from the KVLY tower, there’s a second TV tower that reaches 2,060 feet. That tower, KXJB, which broadcast a competing station, has fallen down and been rebuilt twice — first in 1968 when a helicopter got caught in the guy wires, killing four, and again in 1997 after what Jenson called a “freak ice storm.”

Neither tower is exactly picturesque — just narrow lattices of red and white metal, about 10 feet on each face, anchored to the ground by thick wires.

When it was first built, the KVLY tower was a big deal. Tourists would come to see the tallest structure in the world, and locals were proud to have a landmark in their backyard. Old-timers remember a “tall tower” drink served at a bar in the nearby town of Mayville — Bali Hai wine, vodka, grenadine, and mix, served in a tall, frosted glass — for 75 cents.

These days, however, the tower doesn’t get nearly as much attention.

“It’s a fixture, it’s there. You don’t really think about it,” says Kathy Carlstad, the manager at the Top Hat Lounge, which served the drink. It’s no longer on the menu.

According to Federal Communications Commission records, 16 towers in the country reach 2,000 feet and above, with dozens more only a few feet from the 2,000 mark. Federal Aviation Administration regulations prohibit building above that limit, and only three currently standing towers have exceptions to the rule.

The KVLY tower lost its title of the tallest structure in the world first in 1974 after the completion of the Warsaw Radio Mast, which reached 2,121 feet. But that tower fell down in 1991, and was never rebuilt to the same height. KVLY was again the tallest structure in the world until 2008, when the 2,722-foot Burj Khalifa skyscraper was built in Dubai.

The Burj, the Tokyo Sky Tree, and the Shanghai Tower, which topped out in 2013, are the only other structures in the world that reach over 2,000 feet, according to the Council on Tall Buildings and Urban Habitat, the official arbiter of the tallest buildings and structures. Daniel Safarik, the council’s publications editor, says his group doesn’t track guyed broadcast towers. “There are thousands of them,” he said in an email.

Around the world, other skyscrapers are going up that pass the 2,000-foot mark. The Kingdom Tower in Jeddah, Saudi Arabia, for example, is expected to reach one kilometer in height, or 3,307 feet, by 2019.

But in sheer number of supertall structures, the U.S. beats all contenders. Chalk it up to our national love of the television and the wide-open topography of much of the country. Most of the tallest towers are situated in rural, flat locations. Some are strategically placed to cover multiple cities, and others need to be so high because of low population densities.

“You also need a lot of space to build a tower that high, and rural land is a lot cheaper,” says Don Doty, CEO of Stainless LLC, the largest tall broadcast tower manufacturer in the country. (About half of the towers in the country were manufactured by Stainless since the company was founded in 1947.)

Supertall TV towers aren’t only a rural phenomenon, though. After the 9/11 attacks, a New York broadcaster association considered constructing a 2000-foot broadcast tower within a few miles of downtown Manhattan in order to replace the antenna on the north tower of the World Trade Center, which most local news stations had used. They eventually decided to use the antenna at the top of the new One World Trade Center instead.

After a tower project gets FCC approval, it takes about a year to complete. While the KVLY tower cost $50,000 to build in 1963, a typical 2,000-foot tower today costs about $3 million. “You have documents four to five inches thick” with computer-aided designs of every piece, Doty says. Sections of the tower are fabricated offsite, and then lifted into place one by one. Finally, the broadcasting antennas are assembled and attached to the tower, and turned on.

The tower construction industry as a whole is moving away from building tall TV towers. Many companies are instead focused on more lucrative cellphone and wireless data towers, which are usually 200 to 300 feet.

“The last four or five years have really been a boom cycle in this industry,” says Todd Schlekeway, the executive director of the National Association of Tower Erectors, an industry group. In large part, that’s thanks to cell carriers building out 4G LTE networks.

But broadcast towers (TV and radio) have been left out of the boom. “You’ve seen most of the workforce migrate over to work on the cellular side,” instead of erecting new broadcast towers, Schlekeway says. “Some of the broadcast towers will certainly be demolished,” he predicts.

One big reason is government regulation. The FCC put a freeze on applications for new broadcast TV stations in 2013, in anticipation of a reallocation of broadcast frequencies in the next few years.

Another threat is a change in how viewers get their television, as more and more people, especially young people, go online instead of tuning in to TV stations. Earlier this month, Dish TV launched a new streaming television service that will let viewers watch at least 14 channels online.

While cell towers are the more economically feasible choice for tower construction companies, there’s an artistry in building a supertall broadcast tower that you don’t get in a shorter cell tower. Doty compared the difference to “building a cruise ship versus building a ski boat.”

With the boom in cell towers, there’s also been an increase in injuries and fatalities on tower sites. Twelve tower workers died on the job in 2014, up from single digits in the last few years, said Department of Labor spokesperson Lauren North. (No fatalities have been reported so far this year.)

NATE, the industry group, is working with Department of Labor regulators to set new rules for training and safety of the 10,000 to 15,000 tower technicians who work on broadcast and wireless towers.

“Anytime you’re working in elevation, safety is paramount, there’s no room for error,” Schlekeway says. “Our core mission is a safer workforce.”

Broadcast towers haven’t seen the same levels of injuries and fatalities, in part because there just haven’t been as many people working on them in the past few years. But safety is still a concern.

“You have to be a Type A personality to work in our industry at elevation,” Schlekeway says. “And you have to be, obviously, not afraid of heights.”

Despite changes in the industry and how people get their TV, the engineers and technicians who’ve spent their careers looking up at these towers hope for some continuity. For Jenson, it’s a source of pride that his tower is one of the tallest things on the planet — but more importantly, that it provides a public service.

Without the KVLY tower, for decades it would have been impossible for viewers spread out over rural North Dakota to get local TV news. It’s alerted them when blizzards and thunderstorms hit, helped them stay informed, and connected them over great distances.

“We try and bring the local views, the local happenings, and the things of prime interest to the viewers in the area,” Jenson said. “I’m hopeful that broadcasting can continue to be what it is.” 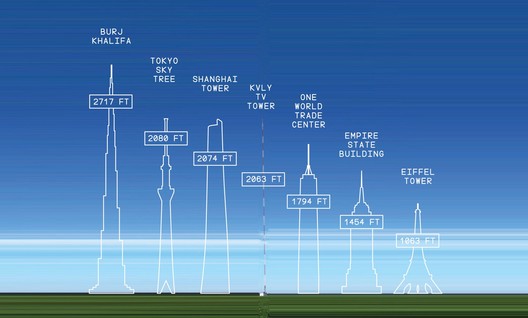