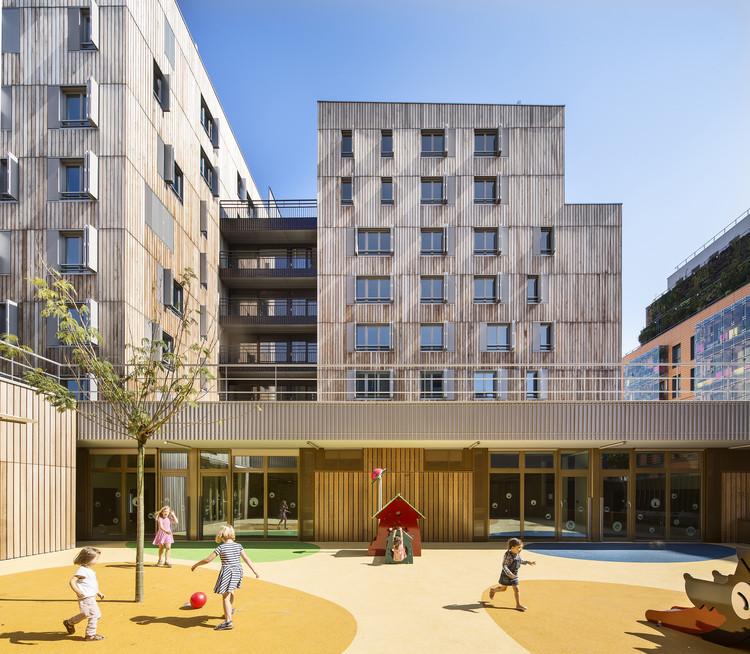 Text description provided by the architects. We had multiple objectives in building these 107 accommodation units above social facilities and business premises:

.opening up the facades to the horizon while diversifying the views and increasing sun and natural light, locating the building in continuity with the urban fabric without disguising the density of the site .giving priority to planting so as to reinforce the dialogue with the square, and giving a shape to the volumes while refining the alignments.

The built volume covers the totality of the plot. There is a first division into two parts and two volumes. Thus, one façade looks onto the rail lines to the “Gare du Nord” and includes the entrance to the creche. The opposite façade is aligned with the rue des Poissonniers in a dialogue with its urban context. The planned shopping facilities are located on that side. Between the two lies a heart, an innerness, a space for “good neighbourly relations”, the idea of the courtyard. It is transparent to the creche, a landscaped patio extending the newly-inaugurated square.

Overhead, air, light and sky. The originality of this Paris site is in the sense, the possibility that you can walk around. Hence the idea of a base, a socle treated independently of the four accommodation volumes.

The pedestal places the accommodation a +4 metres above the street and thus respects the scale of the surrounding apartment buildings.

Thanks to four distinct volumes which, by their size, their height, their density but also the shifts between them interact with the suburb’s identity. The hundred-odd apartments are only visible twenty at a time. Integration is a question of scale here.

To provide quality accommodation, the project set four essential objectives.
-maximize sunlight in all the apartments
-provide a maximum of double or triple orientations
-open a variety of views out onto green spaces and the urban landscape
-ensure a maximum of private external space.

The creche is set back from the rue des Poissonniers. All on one level and flush with the courtyard, it is designed for simple and harmonious functioning. The challenge was to keep it at the heart of the project while allowing cohabitation between the courtyard and the apartments.

Thus, the distancing of the internal facades of the apartments by a system of canopies creating a covered area protects the children and provides an intermediate space, a natural extension of the activity rooms towards the outside.

The children’s spaces are organized two by two, and linked with the outside spaces:
- to the north, the youngest children look out on a quiet garden linked to the park
- to the south, the middle and older children have a larger space designed for the discovery of movement.

The crèche gardens are organized around the motricity space that is open to the exterior. Following the seasons, this space will sometimes be an extension of the garden and sometime a shelter or a cabin between two play spaces. 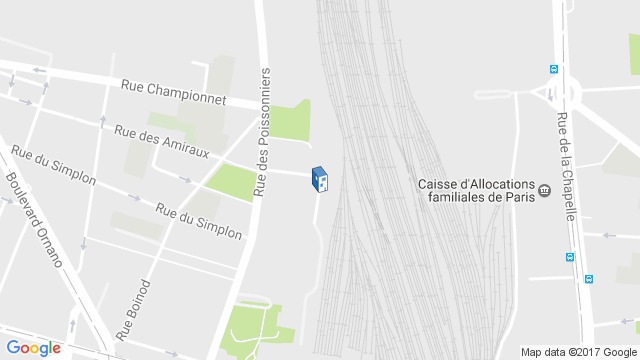