The pivotal turning point in the late Frei Otto’s career – capped by last month’s Pritzker announcement – came nearly fifty years ago at the Expo ’67 World’s Fair in Montreal, Quebec. In collaboration with architect Rolf Gutbrod, Otto was responsible for the exhibition pavilion of the Federal Republic of Germany, a tensile canopy structure that brought his experiments in lightweight architecture to the international stage for the first time. Together with Fuller’s Biosphere and Safdie’s Habitat 67, the German Pavilion was part of the Expo’s late-modern demonstration of the potential of technology, pre-fabrication, and mass production to generate a new humanitarian direction for architecture. This remarkable collection at the Expo was both the zenith of modern meliorism and its tragic swan song; never since has the world seen such a singularly hopeful display of innovative architecture. 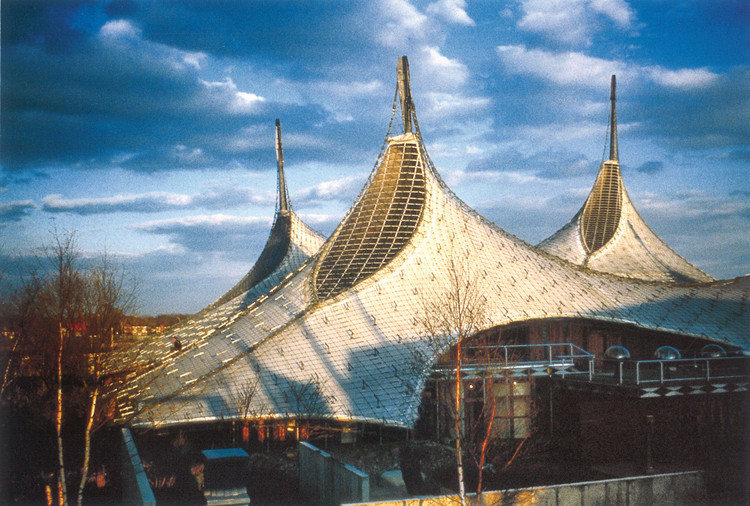 The origin of Otto’s fascination with tensile structures and minimally resource-intensive design dates to his experiences during the Second World War. Drafted into the Luftwaffe as a pilot, Otto was captured and imprisoned in a POW camp near Chartres, France, where he worked constructing tent-like shelters for other prisoners using the limited material means at his disposal. [1] After the war ended, he translated these efforts into a full-time architectural pursuit, investigating their potential application on an industrial scale. His radically simple design premise—creating an architecture guided by resource conservation, structural intelligence, and construction efficiency—found warm reception in the optimistic intellectual culture of the 1950s and 60s. Like Fuller’s contemporaneous geodesic spheres, Otto believed that his tensile canopies promised an architectural solution that was cheap, durable, and highly versatile. [2]

Sensitive to the ever-changing needs of occupants and the impact of the human footprint, Otto also preached the need for temporary structures that were easy to assemble, and just as easy to take down and recycle. With few components, all of which could be adapted to virtually any site and terrain condition, his systems of masts and canopies were a radical simplification of traditional building methods that valued rigidity and permanence. Once it had been designed and pre-fabricated, the German Pavilion in Montreal was assembled on-site in a mere six weeks, only to be dismantled shortly after the fair. [3]

Watch a video of the German Pavilion under construction.

The topographic complexity of the pavilion—a sweeping landscape of hyperparabolic curves—captured the intrinsic beauty of natural mathematical and physical relationships. Generated simply by the connection between suspension points and anchors, the form reflected the undistorted give and take of forces on material fabric with minimal artificial interference. A reporter at the Expo likened the effect to the simplicity of “a tight, white sheet draped over tent poles.” [4] Within this whimsical gesture, the calculated machinations of a master engineer were nonetheless quite obvious.

The canopy itself was constructed of a pre-stressed steel cable mesh covered in a translucent, polyester textile membrane. At several points within the perimeter of the pavilion, the surface of the tent dipped to the ground in dramatic funnel-like cavities, only to rise up again to the soaring height of the masts. Otto’s system was technologically sophisticated yet conceptually simple, carefully calculated yet animated by the irregularity and compositional freedom of unrestrained expression. The pavilion was a little more than a big tent – mankind’s most primitive structure – but it had a beauty in its movements that man, despite all of his machines and fine inventions, had rarely managed to achieve.

Amidst the current saturation of digitally produced forms far more outrageous than the German Pavilion, and with, consequently, structures far more complicated, it is perhaps difficult to appreciate the formal frontiers that were opened up by Otto’s work or the engineering feats he achieved in Montreal in a time before computers. But to dwell on either the structural or the formal facets of his work is to overlook the far more important sentiment that fueled Otto’s adventurous form finding. His intentions were never to build fodder for the appreciation of architects and aesthetes; they were to build for the benefit of humanity. [5] As Thom Mayne recently remarked in a tribute to the late architect, this technological humanitarianism will only “become increasingly relevant as we move into this digital age.” [6] 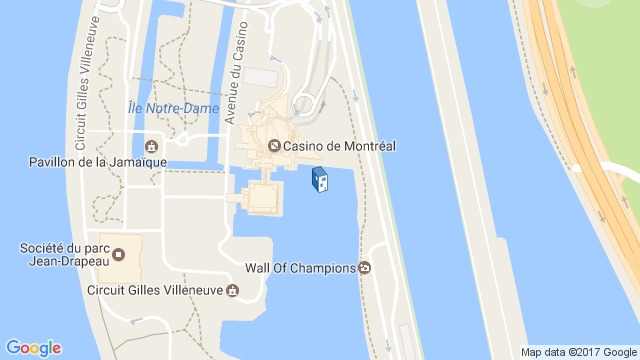 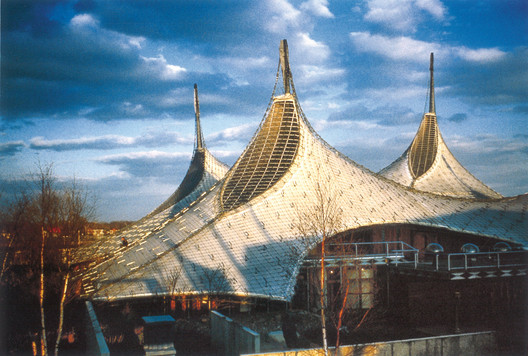