Construction is due to commence later this year on "Antalya Tower," the winning entry of "The Expo 2016 Antalya Tower" competition. Situated on Antalya on Turkey's southwest coast, the tower was designed by local firm NITA (Nitelikli Tasarımlar Atölyesi), and will cater for the city's 10 million annual visitors. The completion of the tower will coincide with the "World Botanic Expo 2016," to be held in Antalya and marking Turkey's first international Expo. 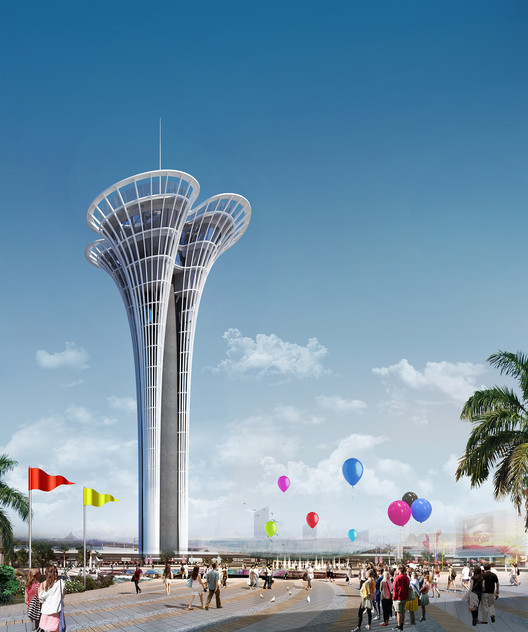 The tower was in part inspired by the triumphal arch "Hadrian's Gate" at the entrance of Antalya's old town, and pays homage to the arch's three gates, with the number "three" recurring throughout the structure. Antalya Tower is tripartite in form, comprised of three panoramic rooftop viewing decks tapering into a single shaft at the building's base. It is estimated that upon completion the observation decks will have a visitor capacity of 250 people. Three terraces will explore the "Flowers and Children" theme of the World Botanic Expo 2016, providing a glimpse into what the event organizers deem a "green planet for the future generations."

The tower's internal planning reserves three levels for visitors, allowing two semi-enclosed observation spaces alongside an open air observation deck. Skylights at rooftop level allow natural light to penetrate the top floors of the building, while affording visitors views of the sky. At the junction between the three "branches" of the building is embedded its concrete service core, which also provides rigidity against on-site wind forces.

Standing at 100.7 meters-tall, Antalya Tower is foremost an observation tower, and features two panoramic elevators allowing breathtaking views of the surrounding city. Digital design methods have been used to detail the building's steel facade, generating a surface that is both striking and highly resistant to local wind conditions.

The tower is due for completion by the commencement of the World Botanical Expo 2016 on April 23, 2016.