SANAA and Snøhetta have been jointly awarded first prize in a restricted competition to build a "New National Gallery - Ludwig Museum" in Budapest's 200-year-old Városliget (City Park). Lauded for their "equally outstanding" proposals, the winning teams will now meet with the jury to be judged "on professional and financial considerations."

Nieto Sobejano Arquitectos and the joint proposal of Balázs Mihály's Architect Studio and the Faculty of Architecture of Budapest University of Technology and Economics were awarded second prize.

The competition is part of a larger cultural project that aims to renew the city's Városliget by 2018 with five new museum buildings built inside the expanded park area.

A closer look at the winning schemes, after the break.

"The 11-member jury of Hungarian and international experts not only evaluated the architectural quality and ideas to be applied in regard to the future museum, but also assessed the technological and functional solutions (e.g. anticipated visitor experience and museum technological solutions), the sustainability of the designed building (energy efficiency, ecology,) its dialogue with the environment (including aspects relating to the green area, its embeddedness in the urban landscape, its connection with the City Park, access to the building), and the expected expenditure (costs of implementation and operational costs).

Since the connection between the park and the built environment is a top priority in the Liget Budapest Project, aimed at the renewal of the City Park, the designs propose a substantial increase in the City Park’s green areas. This spring, Városliget Zrt. will announce a landscape design competition for the complete renewal of the park." 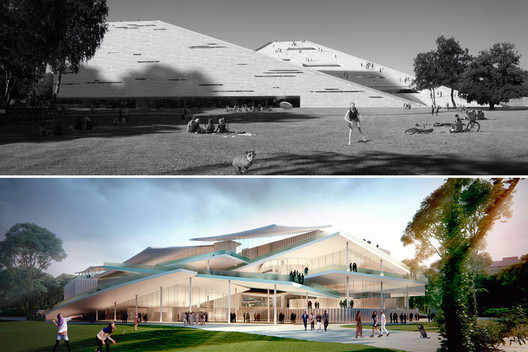