Save
Happy 25th Birthday Photoshop; Architecture Wouldn't be the Same Without You
Share
Or
Copy

This past week, Adobe Photoshop turned 25 years old. That’s right: at an age where us mere mortals are often still embarrassingly reliant on our parents, Photoshop is taking the opportunity to look back on how it became one of the world’s most ubiquitous pieces of software, and how in just a quarter-century it has transformed our very conceptions of beauty and even reality itself.

Of course, to the general public Photoshop is probably best-known for the role it has played in the fashion and advertising industries. Serving up heavily processed, idealized images of anatomically dubious models, its effect in our wider culture is well-known, but Photoshop has had its impact on the architecture profession as well. Join us after the break as we look at 25 years of Photoshop in architecture.

Mirroring the trends in advertising, Photoshop has fueled architecture’s own battle around the concept of “natural beauty.” In the 21st-century world of image-saturated online sharing, the pressure to produce that perfect shot has often led to the removal of blemishes and irregularities from photographs of completed buildings. In some cases, these “irregularities” have even included human beings, who with their relaxed attitude to formal composition and outdated clothes can ruin even the most perfectly designed, timeless buildings.

Photoshop Fun Fact #1
Shortly before co-inventing Photoshop with his brother, John Knoll worked on the visual effects in the film Who Framed Roger Rabbit at visual effects company Industrial Light & Magic. In the time since, he has worked on franchises such as Star Wars, Pirates of the Caribbean and Avatar.

The effects of Photoshop can be seen in less traditional architectural photography too: for example, while still undeniably impressive, the visual impact of Vincent Laforet’s aerial photographs of New York and Las Vegas clearly rely on the color enhancement of photo-editing software, and Laforet himself is something of an Adobe evangelist. However in recent years, this abundance of post-production possibilities has also created something of a counter-movement in architectural photography. Architecture photography superstar Iwan Baan has been quoted by the Wall Street Journal saying that he rarely uses Photoshop, partly because he doesn’t have the time but also because to him, the blemishes and imperfections “are as important to me as the architecture.”

Photoshop Fun Fact #2
Jennifer in Paradise, the “world’s first photoshopped image” which was included with early demo versions of Photoshop, is a photo of John Knoll’s wife (then girlfriend). It was the only image he had to hand when he visited friends - and their expensive digital scanner - at Apple’s Advanced Technology Group lab.

But it’s not just in the photography of buildings that Photoshop has had an impact on architectural discourse. Last year, the Architects’ Journal uncovered that, in a photograph for BBC series The Brits Who Built the Modern World, Patty Hopkins had been removed to leave only the five (male) subjects of the series, glossing over her role as a founding partner of Hopkins Architects. The photograph was just part of an important discussion about how female architects are treated by the media and by the profession itself.

Photoshop Fun Fact #3
Adobe’s Photoshop 1.0 was not actually the first commercially available version of Photoshop. In 1989, BarneyScan shipped 200 copies of the software bundled with their photo scanners.

The most prevalent use of Photoshop in the architecture profession though has ironically little to do with photographs, per se. Photoshop is used every day as a tool to help produce photo-realistic renders of projects yet to be built. Combined with ever-advancing modeling and rendering software, the photo-realistic architectural render has been a topic of much debate over the years, with discussions in journals such as Clog centering on whether spectacular renderings create unrealistic expectations for projects that could never live up to the fantasy of the initial image.

So prevalent is the need to Photoshop renders of architectural projects, that entire websites have arisen to help architects find images of people to include in their proposals. Created by Teodor Javanaud Emdén, SKALBUBBAR allows architects to easily add background-free images of people to their renders. But even this simple gesture was not without controversy: late last year, a similar website named Escalalatina was launched, as a response to the sudden proliferation of inexplicably Nordic render people in designs for Latin American countries.

In just a short time, these websites have been so successful that they are already having their own affect on architectural culture, with games springing up which track the exploits of individual render ghosts - Failed Architecture’s quest to find The Boy in The Yellow Cap, for example, or the solemn man with an umbrella who is seemingly responsible for increasingly rainy weather in render-land.

Photoshop Fun Fact #4
Adobe doesn’t like it when you call an image “photoshopped.” To protect the value of their trademark, they would prefer you said “The image was enhanced using Adobe® Photoshop® software.” And don’t even think about calling an image “‘shopped.”

Most recently, farcical Photoshop practices caused a stir in the Helsinki Guggenheim competition, with many people pointing out not only the prevalence of SKALGUBBAR characters, but also the apparent fact that most architects don’t know any artists other than Jeff Koons. It even appeared that one architect - who thanks to the anonymity of the contest will remain unknown - was unaware that there are no flamingos in Helsinki.

So thanks to Photoshop for 25 years of debates, arguments, games and even fauna in far-flung locations. As Jimmy Kimmel concludes in his own tribute to Photoshop’s 25th birthday, “we’ve never been more confused and it’s all thanks to you.” 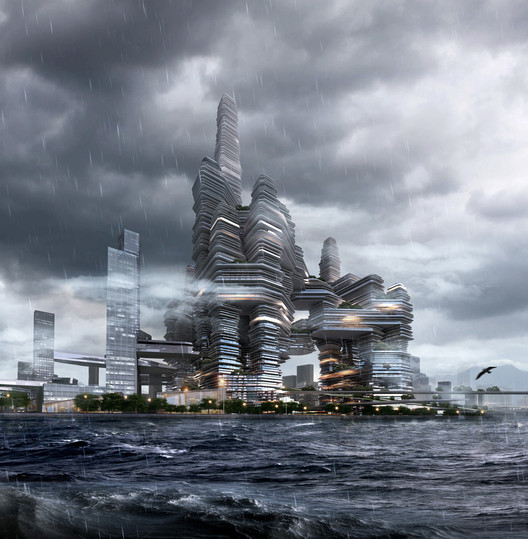