Any system is only as good as its weakest link. A public transport system can have all manner of souped up trains, glamorous transport hubs and turbo-buses, but this can all be for nothing if one station has a confusing layout that unintentionally directs passengers onto the wrong route. For something as interconnected as a transport network, continuous and steady passenger flow is absolutely crucial. With this is mind, the Moscow Department of Transport and Road Infrastructure Development, commissioned City ID - a firm known for their wayfinding solutions in cities such as Bristol and New York - and their frequent collaborator Billings Jackson Design to develop a new system of smart signage for the city. 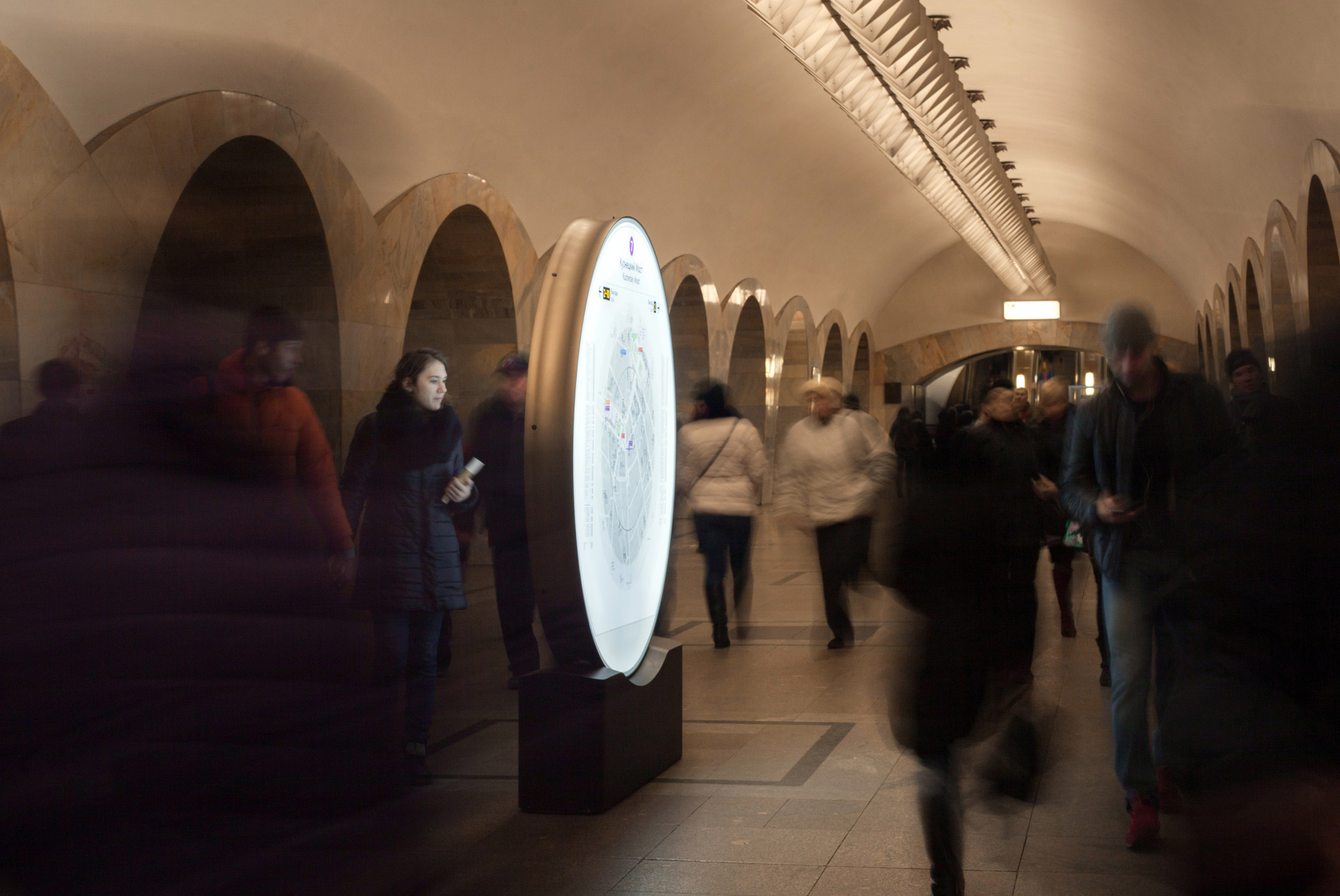 The system will incorporate city maps, transport timetables and station information in a range of different formats; both traditional wall and ceiling units will be manufactured, as well as floor-based interactive units designed for the use of passengers. The intention is to roll them out across all of the Moscow Metro’s 195 stations through 2015, with later plans to expand the system to the tram and bus network, and to a bike sharing scheme.

In Billings Jackson Design’s own words, “The solution was conceived as part of a drive to improve the legibility and experience of the city and in particular to highlight the extraordinary and unique architecture of the metro” and there’s a heavy focus on both the flexibility of the system - in order to allow for useful units in both the metropolitan hubs as well as ones on the suburban fringe stations. The units designed by Billings Jackson Design will house the software and maps created by City ID, forming a cohesive single system; building on the legacy of the London Underground’s famous typography based branding there’s also an emphasis on giving the whole system a unified identity which reflects the city it inhabits. Mike Rawlinson, founder of City ID, brought a similar focus to the New York system. "Things like typography are as important as a building," he told the Guardian, "they’re used millions of times – so why not think of it as part of the DNA of the city itself?"

Not that typography is the only way they intend to evoke the heritage of the Moscow Metro. According to Billings Jackson Design, “The iconic circular totem references the beautiful arched form of many of the metro stations as well as echoing the Koltsevaya (circle) line at its centre.” It’s extremely important that the system is tied to the city it represents properly, as Rawlinson found in his earlier work in his home city of Bristol. “It was about stitching together the city,” he explained of this first project. “The crucial thing is to build any sign system as a system: it’s a network, and you have to plan the routes. You do a lot of modelling – there is a science to this. You have to model new buildings or places through scenarios, data, flow data, trying to predict the needs of the user at any point in their journey. If you get that right, job done. People don’t complain, they just get on and move.”

The Moscow Metro itself does have a striking visual identity and a long heritage; even outside the most ornate landmark stations it would be a huge mistake to not take advantage of this cultural capital. Extremely heavily used - around 9 million people use the system on a daily basis, roughly the population of Sweden - the Metro was first begun in 1935, and has been continuously expanded ever since, stopping for neither the Second World War nor for the fall of the Soviet Union. It’s sorely needed in Moscow - the city was a highly desirable place to move to throughout the history of the Soviet Union, never experiencing urban decay in the way that western cities did in the 1970s and 80s. As a result, the policy of successive Soviet governments was to avoid delegating power to the city (although some power was finally delegated in the 1980s) and instead to construct large, increasingly isolated groupings of Khrushchyovka (prefabricated concrete tower blocks, developed under the rule of Khrushchev - hence the name) on the outskirts of Moscow with little connection to each other or the city itself.

This isolation of the outer suburbs was made even worse by the movement of development power away from the civil authorities into the hands of industrial conglomerates and trusts, who tended to build personal fiefdoms to ensure their respective industries had workers. The resultant isolated pockets of Moscow, underserved by the city’s transport system and severely lacking in services, are being gradually reintegrated back into Moscow proper by the demolition and replacement of the most decayed Khrushchyovka and the expansion of the Moscow Metro. The efforts to make this wayfaring system a cohesive, unified system will go a long way to economically and symbolically incorporating these areas back into Moscow.

Although this vision of a seamless future of movement is appealing in that way that only polished, colourful city maps and interactive overlays can be, the concept of the wayfaring system is not without critics. Leo Hollis, urban theorist and author of Cities are Good For You, has concerns that the “legible city movement” (a wider effort incorporating ideas like wayfaring systems to make information about cities immediately accessible) is putting the city experience on rails: “Like all urban technologies, one has to be very cautious about who is running this, and who it is aimed at. If the legible city only maps shopping malls, car parks and the police station, this seriously reduces what the city has to offer. This can make parts of the city invisible to the visitor. Someone somewhere has made an arbitrary decision that tourists don’t want to go there, or that place is too dangerous so it should be avoided.”

Fair concerns about a curated city notwithstanding, the project in Moscow specifically should open up the city a great deal to the casual wanderer. For Legible London, a project inspired by City ID's work in Bristol, according to project leader Patricia Brown the focus was not to direct the populace around but instead allow them the confidence to wander freely, get lost at will and then find their way back, using only the available wayfaring infrastructure. A walkable, integrated Moscow that is open to all is a lofty goal, but City ID and Billings Jackson are showing all the right signs of rising to the challenge.

References:
[1] Are Better Signs the Secret to a Successful City? The Guardian
[2] Billings Jackson Design Website