London practice Avery Associates Architects has unveiled their designs for No.1 Undershaft, a 270-metre tall office tower directly adjacent to Rogers Stirk Harbour + Partners' Cheesegrater in the City of London's central skyscraper cluster. The building is currently planned to be the tallest in this cluster and the second-tallest in London (after the Shard) - notwithstanding an as-yet-unrevealed plan for the site of the scrapped Pinnacle project which could potentially supersede it. 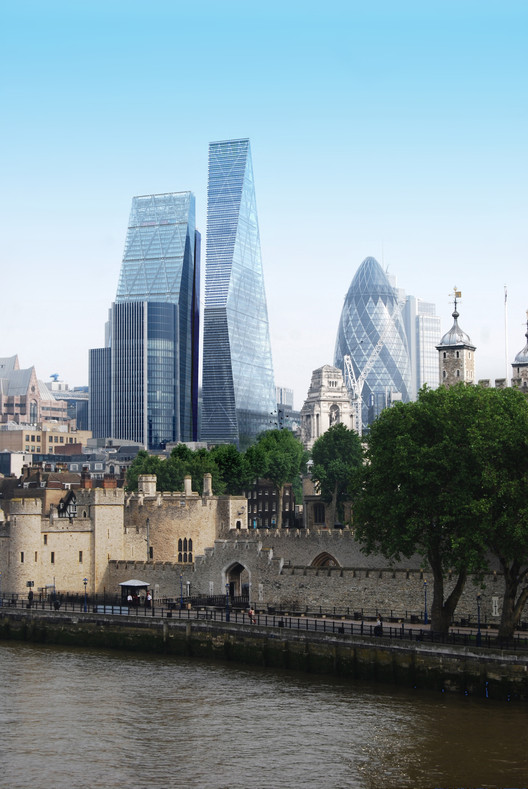 Just like its neighbor, No.1 Undershaft slopes towards its peak in order to preserve the view of St Paul's Cathedral from Fleet street. This sloping Southern facade extends until it meets the sloping Northern facade "to offer the termination that the sawn-off RSHP building seems to need," as Richard Weston puts it in a review of the design for the Architects' Journal.

At the building's lower levels, however, a very different force is at play on the building's form: in order to create a public plaza at the building''s entrance, the sloping facade cuts turns inward to undercut itself and carve out space on the ground level. In the building's uppermost floors, section drawings released by Avery Associates show a restaurant and bar, with the rest of the floors being devoted to office space.

In order to realize the building the existing St Helen's Tower (formerly the Commercial Union Building), a 118 metre building completed in 1969 and designed upon Miesian principles by Gollins Melvin Ward Partnership, would have to be demolished - following in the footsteps of its sister tower which was demolished to make way for the Cheesegrater in 2007.

The project has not had an easy ride to get this far: originally commissioned by developer Simon Halabi in 2010, Avery Associates were tasked with designing a building that would work in a composition with the aforementioned Pinnacle, a planned 304-metre tower on a site nearby, when that project was still merely "on hold." Since then, not only has the Pinnacle project been abandoned, making the project the unexpected centrepiece of the tower cluster, but the site at Undershaft has changed hands to an unnamed Eastern developer. According to Weston, this new client is still seeking funding for the project.

Story via the Architects' Journal and BD Online