One of three runners-up in the 2014 Audi Urban Future Award, the Berlin Team of Max Schwitalla, Paul Friedli and Arndt Pechstein proposed a futuristic and innovative concept for an entirely new type of personal transport. Drawing inspiration from sources as diverse as elevator technology and biomimicry, their designs offer a thought-provoking alternative to our existing transportation systems that could revolutionize the city as we know it.

Though their proposal ultimately lost out to Jose Castillo's Team Mexico City, the work of the Berlin team correlates closely with the aims of Audi's Urban Future Initiative, offering a compromise between the convenience and status of personal transport and the civic benefits of public transport. Read on to find out how this was achieved. 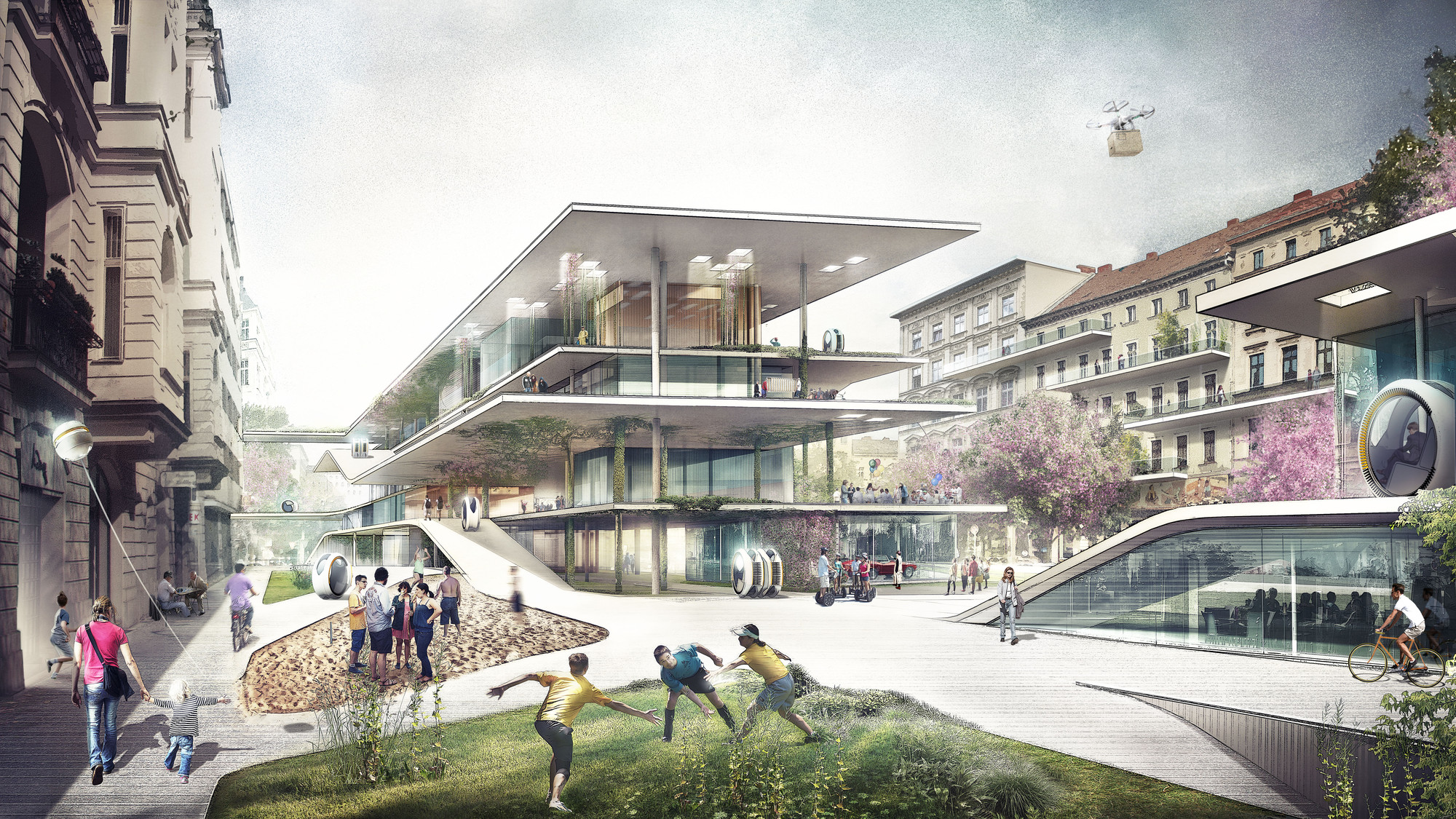 "The car was for a long time considered THE symbol for individuality and freedom, especially in Europe and North America," states Audi in its Drivers of Our Urban Future report explaining the background to its Urban Future Initiative. "The much-posited change, put forth in the media, that attributes a declining status to cars is only partly true: Firstly, in many regions of the world the car is increasing its expressive ability to represent individuality and status. Secondly, even in regions where the numbers of driver’s licenses are decreasing, the car continues to be of great importance for many mobility participants." Elsewhere, the report by Audi outlines their argument more strongly, saying that "the strong correlation between wealth, measured in terms of gross domestic product per person, and the increase of individual transportation makes one thing clear: Those who can afford it prefer individual transportation."

Despite this argument provided by Audi, the trend in 21st century city policy remains firmly against them. "By making adjustments to the parameters of space, time and money, city governments all over the world are trying to push the automobile back to the periphery and replace it by alternative means of mobility," they say, putting the automobile manufacturer in a difficult position. "In the spirit of cooperative competition, the task is not to oppose restrictions but to present better alternatives," they explain, arguing that "sustainability and progress are not contradictory."

Building upon this provocation, the Berlin Team proposed a system incorporating pioneering driving technology, powered by self-driving cars and borrowing a concept from the elevator industry known as "destination control." This technology allows an increase in efficiency by having passengers program in their desired floor upon calling the elevator, allowing an algorithm to calculate the most efficient path. By grouping passengers who are travelling to nearby floors, the total travel distance required by the elevator is smaller. Team Berlin's proposal argues that once self-driving cars become a reality, Destination Control could be applied to personal transport, with cars which follow the same route grouping together and the precision of the self-driving systems allowing them to drive bumper-to-bumper, thus taking up less space on the road and easing congestion.

All this would be enabled by a central, city-wide processor which receives information via networked infrastructure within the city, thanks to "Car-to-X" technology, and informs the vehicles of possible routes thanks to the reciprocal "X-to-Car" technology. The team behind the proposal points out that one-third of Berlin's traffic lights are already enabled for this technology, and therefore the infrastructure required for their proposal is not so far from being a reality.

To test their proposal, Team Berlin identified an opportunity arising in the near future: with the opening of the new Berlin Brandenburg Airport estimated for around 2018, the city's current airport at Tegel will be closed and transformed into "the Urban Tech Republic," a new research and innovation quarter within Berlin. An abandoned elevated highway known as the Siemens Line runs between the airport and the nearby Jungfernheide station which connects Berlin's U-Bahn and S-Bahn. Team Berlin's proposal to turn this abandoned piece of infrastructure into a "flyway," therefore connecting their planned system to a key piece of the city's existing mobility infrastructure, would create the perfect testbed for their ideas.

However, the proposal does not stop at this near-future scenario. Building on the concept of Destination Control, the team envisaged an entirely new form of personal transport which can temporarily couple with its neighbors to create larger vehicles, and can also use public transportation infrastructure such as train and metro rails. Whereas Audi's report suggests that a successful transport solution for cities should "no longer be restricted to one form of mobility, but must instead work across different systems," Team Berlin's "Flywheel" concept goes one step further, merging the present transportation systems into one.

"When the operation of transportation systems in a city is strictly separated, waiting times at stops and bottlenecks on the streets automatically arise," says Max Schwitalla. "We want to combine the advantages of individual urban means of transportation and close the gap in connections to the last mile. To do this, we build on the existing infrastructure."

The Flywheel concept also has advantages beyond mere efficiency. "This collective transportation system is a social enabler," says Schwitalla. "Because we share the same destination the chance to meet your neighbor on the way home is much higher now. Moreover it could become an open innovation platform for the sharing economy."

By blurring the boundaries between public and private transportation, and between individual and social desires, the concept by Team Berlin demonstrates Audi's assertion that despite strong anti-car sentiments among many city governments, there is still a potential future for individual transportation.