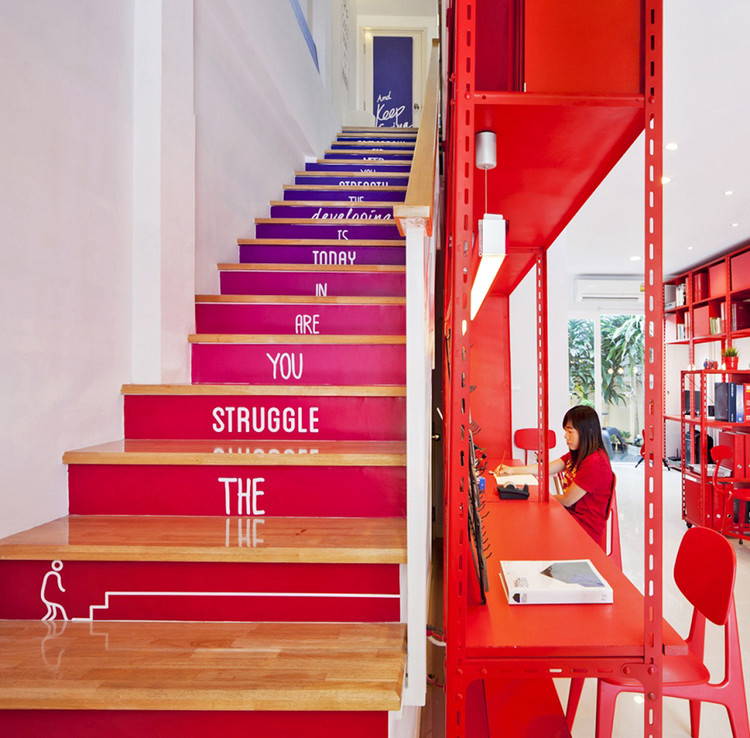 Text description provided by the architects. Working as the office in someday, it may be expand for support more amount and challenging of work that related to increasing of office members who need appropriate space for work. For supporting this expansion, built environment is the first criterion to be concern. Especially for the multi-disciplinary as “Apostrophys” whose new office space “Apos2” have to think twice.

According to the existing headquarter office is located in housing development called “Town Home” which has been found in a prime area of Thailand usually. It is a mixed used building as a resident and office. There are 3 floor with a striped space and a limited space surround the building. So, it is impossible to do expansion on the existing site. Furthermore, to build a new building on a bigger site is not a good choice because of time and constructional cost limitation. Due to this reason is contribute a design concept of “Apos2” that inspired from a “Sprouting of a plant”, there is a new sprout near its mothers' root. It is similar to “Apos2” also located near its headquarter at the same housing development, allow them to have a meeting or share some essential facilities such as learning-media, design material or some special equipment without duplicated or additional purchased.

For a dramatic growth rate of the office nowadays, time is the main factor to concern. Spending overmuch time to design and construct a new one may be effect the growth and efficiency. “Apos2” could be the prototype of “Instant Office” by using “Knock Down” structure assembly with a simple technique and general building material such as Angle bar, plywood, basic fitting, finishing with general painted color. There is not any part of this design that effect or attach the existing building surface, so it is a flexible space for move out or do a renovation at the future. Besides, it is an appropriate space for working as “Multi Disciplinary” which is a collaboration of the experts from the different kind of work together with a flexible scoop of work that related to the meaning of “Square” in “Apos2” which do not only mean “multiply a number by itself “ but also means“a multi-purpose public area” as same as the design objective of this space to welcome all the expert from any kind of works with a double space.

Moreover, another objective of “Apos2” is to be a space for learning a corporate culture and training for the beginner. Vivid primary color have been used as a core of design, consisting of 3 pure colors red, blue and yellow have been mark in each level link by a spectrum staircase as well as free hand Typographic and playful Pictogram which illustrate about design philosophy has been placed on the wall. Spotting to a giant mascot name “Aposer” figure as a fat man with has 2 sides separately. On the left side, it is fulfilled with numerous colorful candy with different characters and face while another side showed the internal organs such as the skeleton, mouth, intestine, brain and heart those are composing from the word “Aposer” which represent unity and ambition to the goal of work. This humorous meaningful “Aposer” was figured to link the vertical space on a double height wall at the landing between 2nd and 3rd floor. For the space planning, we can categorized into 3 part as following

1. First Step – The retro neon sign has been placed on a hot red wall at the entrance. Then, entering to the first floor area has been design to be a reception hall and cafe for whether officer or guest. There are chairs and long desk along the wall beneath a loft steel cabinet. Red is the most powerful warm tone color so, it has been use to energized, and stimulated a guest to be excite and staff to express their enthusiasm at the first step.

2. Keep Going - the second floor has been designed for working area called “Aposer Room”, marked by a blue, to make this space is calm, tranquility and stable. It is a open plan office, all working desk have been placed facing each others to allow them to have some discuss. A huge typographic phase “There is no “I” in TEAM but there is in WIN” have been place on the wall dominantly to remind all staff to cut down their self-esteem, then collaborated or have discussion to solve the problem or any conflict.

3. To be Continue- whereas the third floor is the last level but is not the last of work, this floor has been realized for “Brain Storming Room” and executive room. It marked by a bright yellow to light up the space and may be spark the creative thinking as well as the typographic phase about working development to inform both beginner staff and executive officers.

In conclusion, there are another creative solution to expand the existing office without high cost or long term of construction. “Apos2” can be the prototype, in the event of high cost of the land and dense in the city, causes a Sprouting office near its existing headquarter. This spout is fresher, newer and grow faster than its mother with a simple kind of material and construction technique, but it can still preserve its DNA of its mother that is a philosophy of work which can be seen in every detail in “Apos2”