Read on after the break for more on the design and a complete set of images. 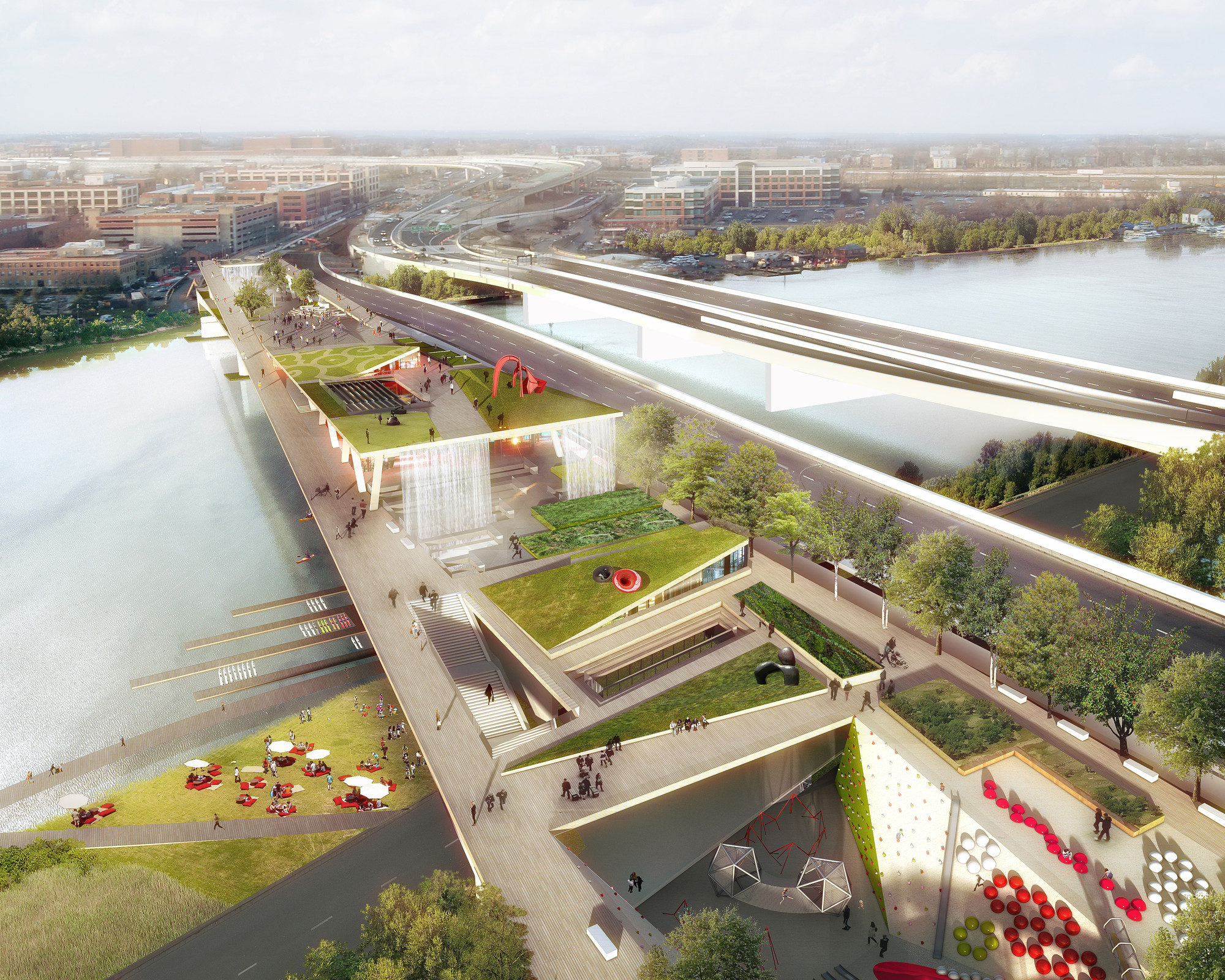 Partner at OLIN Hallie Boyce commented, "The 11th Street Bridge Park project is an incredible opportunity to contribute to the civic fabric of Washington, D.C. through the design of an iconic, multi-functional landscape which promotes the health of the river and its adjacent communities acting as a model both nationally and globally."

The design of the bridge pulls the two ends of the bridge upward to form an X-shape, providing shelter for programs such as a performance space and a cafe, as well as plenty of open space for plazas, lawns and urban agriculture plots. This manipulation of the form also turns the thoroughfare into a destination all of its own above the river.

“Our design creates a literal intersection and a dynamic, multi-layered amenity for both sides of the river,” explained OMA Partner-in-Charge Jason Long. “It simultaneously functions as a gateway to both sides of the river, a lookout point with expansive views, a canopy that can shelter programs and a public plaza where the two paths meet. The resulting form of the bridge creates an iconic encounter, an “X” instantly recognizable within the capital’s tradition of civic spaces.”

In addition to being unanimously selected by the jury, OMA + OLIN's deign was awarded the highest marks from the competition's “Design Oversight Committee,” composed of local stakeholders, and also received the most votes in a public opinion poll of the four submitted designs.

“The OMA + OLIN concept is simply brilliant in the way they captured ideas we heard from residents on both sides of the river and from across the city” said 11th Street Bridge Park Director Scott Kratz. “These thoughtful designers – some of the best architects and landscape architects in the world – have taken community driven ideas and created a compelling new space that will connect two historically divided parts of the city while adding a new shape to the capital’s iconic monuments.”

Organized by the Washington D.C. Government in collaboration with a local non-profit, "Building Bridges Across the River at THEARC," the focus for the 11th Street Bridge Park will now be on securing funding for the project. A $1 million campaign from public and private donors has thus far been met with an additional $14.5 million from the D.C Government. With the selection of a final design, a capital campaign has been launched to match these funds.