Save
Artist Mark Lascelles Thornton On His Completed Masterwork: "The Happiness Machine"
Share
Or
Copy

Over a year ago, we shared a work-in-progress drawing project that captured our imagination with its combination of huge size and meticulously small details. Now, "The Happiness Machine," Mark Lascelles Thornton's 8-foot by 5-foot, three year long drawing project is complete, after over 10,000 hours of painstaking work.

Lascelles Thornton, a self-taught London-based artist who describes himself as "one of those kids that was drawing before I was talking," created the artwork as a response to the global financial crisis, focusing on themes of socio-economics, consumerism, globalism, resource shortages, urbanism and architecture. We spoke to Lascelles Thornton about his artwork, discussing the themes of the piece and the commitment - or, as he describes it, "emotional engineering" - required for such a colossal undertaking. 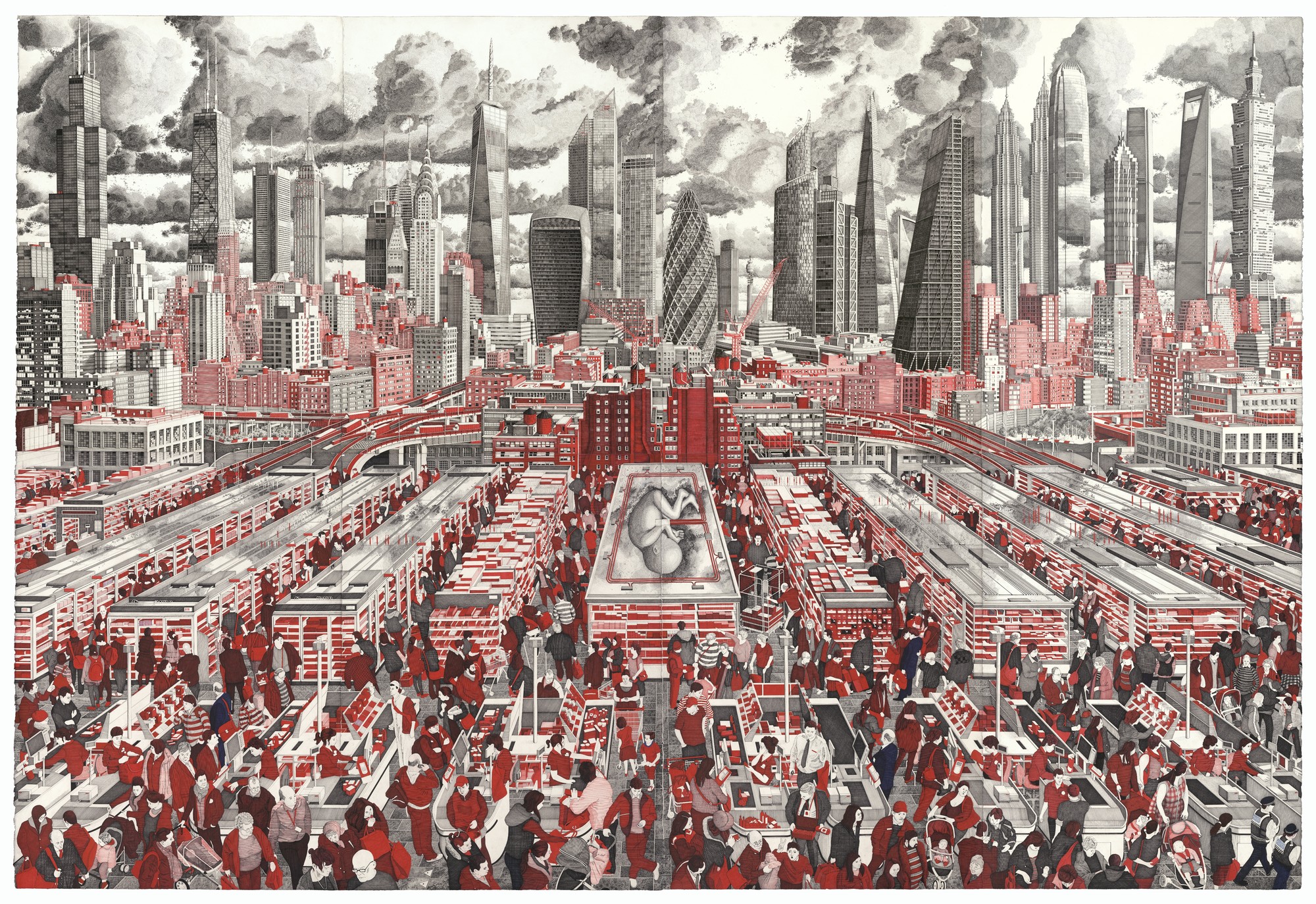 The creation of this project lasted 3 years - roughly how much actual drawing time did that involve, in terms of hours?

I started the drawing 3 years ago, in August 2011. In terms of actual drawing time it gets a little more complicated - I'd say it was a solid two years of drawing, but they were 100 plus hour weeks. Very focused periods. Obsessive even. You don't sleep properly, you don't eat properly. Before you know it you've got this great bushy beard and you think it's going to take a good hour to rid your face of it, but you can't bring yourself to squander that hour. It's just an hour but it's precious drawing time.

It takes a good five hours before my hands are working efficiently. After ten or 15 hours you can draw pretty much anything and you don't want to stop. This is obviously a very unhealthy way to exist, and you require a certain type of emotional engineering. But you also need to punctuate the process with breaks, and that's where the extra year comes into play. It's ten thousand hours over two years with a year's worth of breaks in between.

What made you decide to take on such a monumental drawing project?

What was the process behind the drawing - was it meticulously planned before you began or did it emerge as you went along?

I thought about for a couple of years. The financial collapse of 2008 played a pivotal role in its creation for sure. Suddenly, everything is under threat and you're being told by your political leaders to go shopping. It's completely crazy, and I wanted to say something about it. I did a lot of research, looking for answers and much as anything. How did we get into this mess? That kind of research is steady work, and you are looking into a multitude of linked subjects. Consumerism, Economics and finite resources.

The picture didn't form in my mind until I ventured into one of those two story supermarkets. These are a relatively new concept in the UK. I was standing on the mezzanine level of this particular multi story supermarket complex, and stretching out before me on the ground level, was what looked like a sprawling metropolis. Supermarket isles which looked like city blocks, complete with cables and air conditioning units on the tops of fridges. Like looking down on a city from the top of the Empire state building. One of those epiphany moments I guess. The basic picture formed in the mind in a matter of seconds.

What is the meaning or message behind the drawing - is the relationship between the people in the foreground and the skyscrapers in the distance important?

Well as an artist you don't want to say too much as far as the picture goes. The viewer has a 50% stake in its true meaning. "What's that foetus doing there?", that's usually the first response. I'm yet to hear anyone utter the question "What is the city doing there?"

I think that's much more interesting because you are getting onto the subject of human relationships. Without relationships there is nothing. Our whole civilisation is built on them, and now we are putting it all at risk with our reckless use of finite resources. There is this big question as to how we are all going to run our cars when the oil runs dry, or gets to expensive. We don't have the energy to run millions of electric cars just yet, and the reality is we are grossly overpopulated and we will run out of food first. This is the issue we need to address.

You can break down any country, city or citizen into two colours, black and red. It's a money issue. You either inhabit one colour or the other. Most of the world is living in the red, and that's just a statement of fact. So we come to the question of debt, deficits, and an economic system that requires growth. At the moment there is a flaw in that economic idea, because you cannot grow forever. Sooner or later you run out of resources.

Sustainability is a greasy little word, but the picture does in some way illustrate a world that has been living a very unsustainable lifestyle. We know how to build a low energy building for Bank of America or Bank of China, or whoever. But a building is nothing without its occupants. Are the occupants' practices sustainable? At the moment the answer is no, so for the moment the whole concept falls down.

When it comes to the iconic skyscrapers in the background, London is perhaps over-represented, considering how few tall buildings it has relative to other cities. Is this simply because you're London-based, or do you think there is something specific about the skyscrapers of London that lend themselves to this drawing?

Well London is my centre yes, and I can confess to a little bit of self indulgence. It's true, height wise London's skyscrapers don't compete with The US and China, but I needed them to. I brought them into the foreground, partly as a composition necessity, and partly because I just wanted to draw a big Leadenhall building. That's where my self indulgence kicks in. It's probably my favourite tall building.

But most of all, London's central location has something to do with Greenwich mean time. The Americas to the west, and China to the east. It is hopefully representative of one city. A global city or a compact city perhaps. Cities have become more prominent than countries in the 21st century. That was probably always the case, but it's much more obvious now. And with statistics suggesting that most of the worlds population will be living in them, before too long it's not an idea which can be easily dismissed.