"To tell the truth, we have been trying lately to be as primitive as possible; in an era where the hunger for novelty is threatening architecture to become immediately obsolete, we are looking for timelessness." explains Elemental. "In this case, the site and the program allowed for a natural move towards the archaic."

The building consists of three volumes: one upright, which hosts the bedrooms and bathrooms; underneath a low, horizontal volume which includes the main living space, with an open fire; connecting the two is a skewed volume that acts as the chimney for the fire.

The architects saw this fire as the centerpiece of their design, embodying their desired spirit of primitiveness. They were intent on "not a chimney (which is already something civilized), but a fire (which is one of the most revolutionary yet old achievements of man)."

The house is mostly poured concrete, with the surface of the roof terrace finished in the same wood used for shuttering. "We expect these pieces to age as a stone, acquiring some of the brutality of the place but still being gentle for people to enjoy nature and life in general," say the architects. 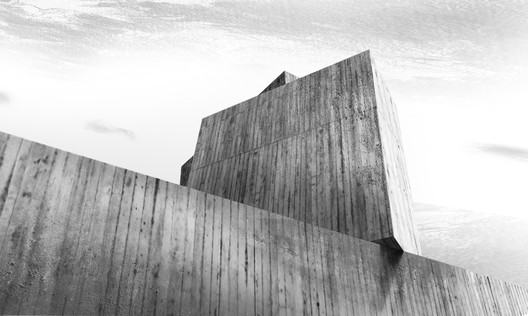