One of the earliest built works of Richard Meier, The Saltzman House, completed in 1969, is one of several Meier-designed residences that exhibits his signature style: absolute whiteness, geometric composition, and the prominence of light. With a heavy early-Modernist influence, the Saltzman House captures the purity of form and space seen in the projects of Le Corbusier. 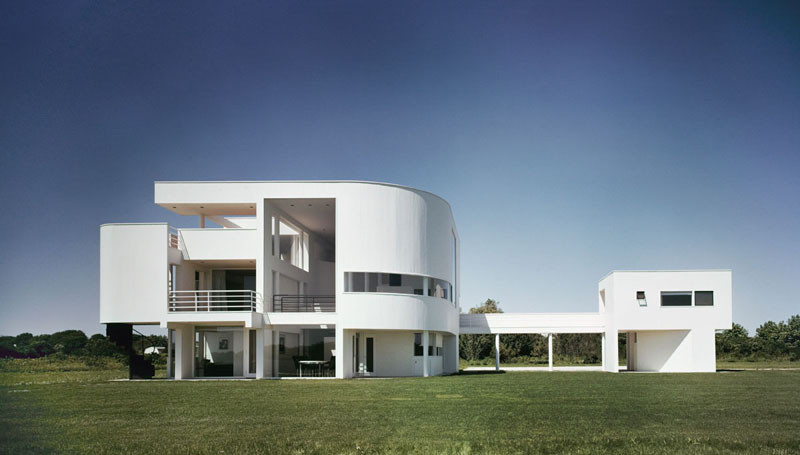 Situated on a flat, three-acre East Hampton property near the tip of Long Island, the house consists of a primary three-story structure and an adjoined guest house. Meier explains that “from a distance, the cubic composition appears to flatten into a two-dimensional shape against the background of land and sky.”1 In order to take advantage of the scenic coastline, which is not visible from the ground plane, the upper two levels of predominantly common space are elevated above a slightly recessed private ground floor. This lifting of the upper mass produces a sense of weightlessness similar to what Le Corbusier achieved with the use of pilotis, but with greater elegance and subtlety. The house reads as a monolithic mass with intelligent voids, strategically located to optimally articulate daylight for the interior. The exterior, which features a prominent curving plane, is clad with vertical, white-painted wood siding and perforated with ribbon windows.

One enters the Saltzman House via an outside stair attached to the guesthouse that leads to an elevated walkway connecting to the middle level of the house.  Adjacent to the entry corridor, the spacious and abundantly day lit double-height living space is interrupted only by round steel columns.  Four of these columns surround an opening to the dining room below—the only triple-height volume.  Attached to the living space is the master bedroom, which includes a walk-in closet, ensuite bathroom, and covered terrace.  At the center of the house a diagonal stair connects to the lower, more compartmentalized level.  Wood load-bearing walls on this private level separate the kitchen, den, two bathrooms, four bedrooms, and the aforementioned dining room.  The upper level, largely consumed by a terrace, looks down over the living space below.  An external spiral stair provides a fourth method of circulation, which services all three levels.

The early residences of Meier, such as the Saltzman House, established a clear foundation for his unique and recognizable style.  Examining the Saltzman House one finds the use of white, geometry, the layering and sophistication of composition, and his treatment of light; all of these characteristics remain present in his contemporary projects.  Light—perhaps most relevant to his work—dictates his spatial concepts and forms.

Shortly after completion of the Saltzman House in 1969, Meier became known as one of the New York Five, a group of architects bound by both their physical proximity and mutual dedication to Modernism. Of the Five, Meier was particularly relentless in his “pursuit of the essence of modern architecture,” for which he was later awarded the 1984 Pritzker Prize.2 His style, developed through early residences such as the Saltzman house, delivered a strong voice for Modern architecture during a time when philosophical conflict of contrasting movements was commonplace. Contrary to other architects who became influenced by Postmodernism, Meier consistently stayed true to his Modernist ideals. Meier is considered to be one of the greatest American architects of the twentieth century alongside Frank Lloyd Wright and Louis Kahn, both of whom he has great admiration for. Richard Meier & Partners Architects remains a successful contemporary practice. 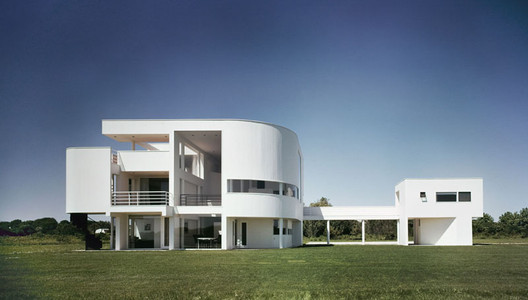