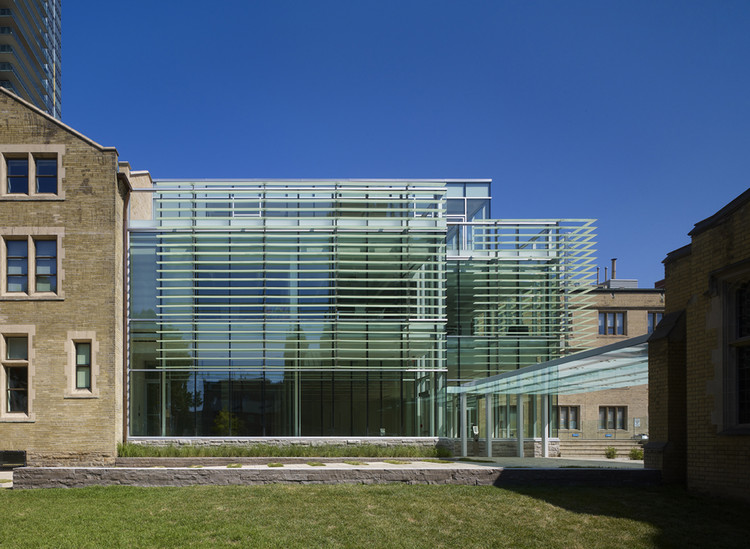 The new St. James Cathedral Centre stands in the shadow of the Cathedral Church of St. James. The new administrative and outreach headquarters for the Anglican Diocese of Toronto, described by urban affairs journalist Christopher Hume as “a marvel of simplicity and crystalline beauty,” has enabled the Diocese to embark on a third century of spiritual and pastoral care on Toronto’s downtown lower east side.

Heritage and contemporary architectural elements are organically integrated through a contemporary interpretation of the principles of built form and spatial organization that inform the 1854 Cathedral. Strategic interior renovations have created a more efficient, flexible space which houses a public meeting hall, community outreach rooms, the Diocesan Archives and Library, administrative offices and residential apartments for clergy and visiting scholars.

The paved and landscaped walkway between the Centre and the north apse of the Cathedral links the buildings and creates a contemplative open space between the bustle of Church Street and leafy St. James Park. At night, the illuminated Centre becomes transparent, spilling filigreed light into the plaza and the Park – a beautiful metaphor for the Cathedral as a beacon in the community.

History and Project BriefThe Cathedral Church of St. James is the worship centre of the Anglican Diocese of Toronto. The first church on the site was built in 1807, and served as a hospital during the War of 1812. The present Cathedral, designed in the Gothic Revival style by Frederick William Cumberland, was opened in 1853. It is a designated heritage site and an enduring landmark in Toronto’s St. Lawrence neighbourhood.

The Cathedral’s Parish House, which houses the Diocese’s administration and outreach programs, was constructed in 1910 from designs by Darling & Pearson Architects, and expanded in 1958 by Mathers & Haldenby Architects. By 2000, the facility had manifested pressing structural and maintenance problems. The Diocese commissioned the architect to undertake an expansion and restoration program to address these issues and the increased demand on its outreach programs. Subsequently, the brief grew to include quarters for the Dean of the Cathedral, accommodations for visiting clergy and researchers, and the Diocesan Archives. The historic fabric of the House was retained, and three levels of new construction tied into it. The re-named St. James Cathedral Centre opened in May 2012.

DesignDespite its resolutely modern design, the Centre achieves harmony with the Church by offering a contemporary interpretation of the principles of built form and spatial organization that inform the heritage structure. The characteristic light, airy interiors of neo-Gothic architecture find modern expression in the highly transparent addition, which conducts daylight deep into the core of the renovated and expanded Parish House.

The addition is sheathed in a screen of horizontal glass ribs carried on a stainless steel supporting structure. The structural steel columns that support the new building are set back from the glass wall, allowing them to be read as a design element. The new structure, described by journalist Christopher Hume as “a marvel of simplicity and crystalline beauty,” contrasts with the solidity and mass of the Cathedral. Nevertheless, the architect’s experimentation with light and exposed structure is clearly influenced by the mullions and buttresses of the Gothic Revival cathedral.

Snell Hall – the Centre’s principal ground floor public space – is fully glazed, with views out to Church Street, the Cathedral and St. James Park. Sliding doors let out onto a terrace with steps down to the walkway and paved plaza. At night, the illuminated Centre reads as a lantern, spilling filigreed light into the plaza and the Park – a beautiful metaphor for the Cathedral’s pastoral role of outreach and care.

Interior renovations were strategic. The arches, pilasters and masonry walls of the 1910 structure were uncovered, sandblasted and refurbished, and provide a counterpoint to the modern structure. The basement and ground floor accommodate public programming, including community outreach, choir practice areas, vestry rooms, the Diocesan Archives, the Library, and Snell Hall. More private uses – administrative offices, and apartments for the Cathedral Dean, visiting priests and scholars – occupy the second and third floors.

ContextThe Centre stands on the southeast corner of Church Street and Adelaide Street East immediately north of the Cathedral, which faces onto King Street East. Formerly the two buildings stood back-to-back, relating to adjacent streets rather than to one another. The renovation and expansion project has significantly reoriented the site. The paved and landscaped walkway between the Centre and the north apse of the Cathedral links the two structures, and establish a new east-west axis between Church Street and St. James Park. Alternating bands of limestone paving and greenery mark the original proposed footprint of the Cathedral and commemorate the early Toronto residents of whose unmarked graves lie beneath the pathway. The result is a sheltered enclave drawing together the pastoral, spiritual and administrative elements of the Cathedral precinct, and connecting an intimate manicured open space with the more public green space of the Park.

· Strategic demolition that preserved and re-used the foundations, basement level and ground floor slab of the existing Parish House and Diocesan Centre; where needed, helical piles supplement the existing foundation and interior structural walls below grade 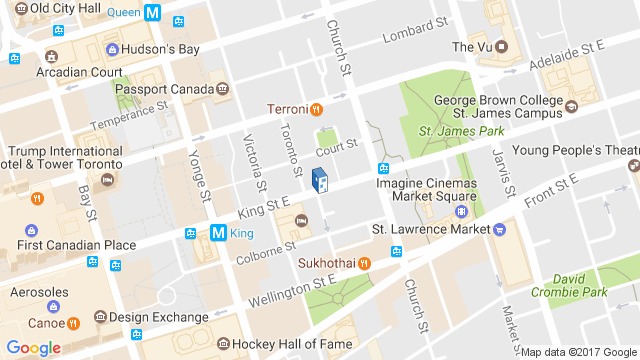