Lafayette Park was the collaborative effort of Mies van der Rohe, landscape designer Alfred Caldwell, and planner Ludwig Hilberseimer. Herb Greenwald, the developer, worked with Mies previously on the apartments at 860-880 Lake Shore Drive. The architecture is decidedly Miesian, with pronounced structural elements and panels of plate glass, but the characteristic austerity is tempered by the configuration of buildings and surrounding landscape.

In many ways, Lafayette Park exemplifies the modernist ideal of ‘towers in the park.’ The 22-story towers are complimented by smaller-scale housing forms and surrounded by a 13-acre green space known as The Plaisance. Though the neighborhood is relatively close to downtown, it exists as a community apart. The area exudes a sense of security and calm in a city currently considered the most dangerous in the U.S. Property values and occupancy rates remain comparatively high. This may be the result of Lafayette Park’s collaborative design- the landscape, urban planning, and architecture were simultaneously considered from the project’s inception.

Lafayette Park contains a variety of housing types, including three high-rise apartment buildings, 162 townhouse, and 24 courthouses. At the development’s northwest corner sits the Pavilion, which offers rental apartments of one, two, and three bedrooms. To the southeast, the East and West Lafayette Towers rise either side of a low garage set partially below grade.

The individual buildings are tied together by features typical of Mies’s architectural aesthetic. Steel columns or mullions are visible on the exterior and run the full height of the facade. Plate glass windows extend floor-to-ceiling in the Pavilion, townhouses, and courthouses, and begin just above the floor in the East and West Towers.

The townhouses are identical, two-story bars arranged perpendicular and parallel to each other. Viewed from above, the configuration reads as rigid and regularized. From within the cluster of townhouses and courthouses, however, the rectilinear geometry is softened by greenery and obstructed views. Play areas, communal lawns, and parking lots fill the interstitial spaces between the bars, whose relatively small scale creates an intimate residential setting. The vastness of the complex is nearly imperceptible from the townhouse lawns, with the towers just visible through a screen of trees.

Mies placed the kitchen and living areas on the first level of each townhouse, with the bedrooms located above. In some instances, the upper level of a unit is offset from the level below, allowing for a variety of bedroom configurations. The expansive glazing at the front and rear facades allows ample natural light during the day. Constructed during an era of highway building in a city devoted to the automobile, Lafayette Park was certainly designed with the car in mind. Rather than prominently exhibiting the parking lots between townhouses, the design team placed the parking several feet below grade. As a result, the cars cede to the landscape and the architecture.

Though Lafayette Park is widely regarded as a successful example of urban renewal, the development exposes the duality of the approach. The effort began with the demolition of Black Bottom, a working-class district considered a slum by the municipality. As Lafayette Park was designed to house middle-income residents, many former occupants of Black Bottom relocated to the nearby Brewster-Douglass and Jeffries Housing Projects. While Lafayette Park continues to offer desirable housing, the projects intended to house former Black Bottom residents no longer exist.

For more information on Lafayette Park, see Thanks for the View, Mr. Mies. or visit MiesDetroit.org. 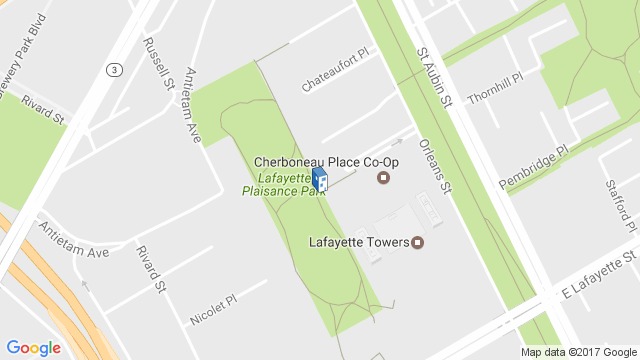 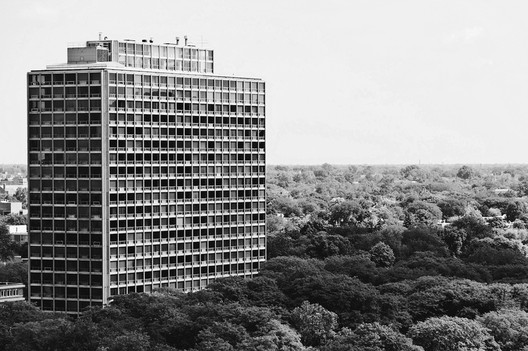