The Royal Institute of British Architects (RIBA) has announced the President’s Medals Student Awards at a special event in London. The awards, known to be the world's most prestigious awards in architectural education, were inaugurated in 1836 and are therefore the institutes oldest award (even older than the RIBA Gold Medal). Three medals - the Bronze for a Part I student, the Silver for a Part II student, and the Dissertation Medal - are awarded to "promote excellence in the study of architecture [and] to reward talent and to encourage architectural debate worldwide."

Around 300 schools of architecture from over 60 countries were invited to nominate design projects and dissertations by their students, of which students of the Bartlett School of Architecture at University College London won all of this year's primary awards.

Stephen Hodder, President of the RIBA, said that the winners "overcame intense competition from the best students of architecture around the world and truly shined with their innovative, challenging and thought-provoking projects," going on to say that "2013 has been year of exceptional entries for the RIBA President’s Medals which continues to highlight and reward the very best talent from around the world. It’s been a pleasure to present these awards to the future leaders of our profession." 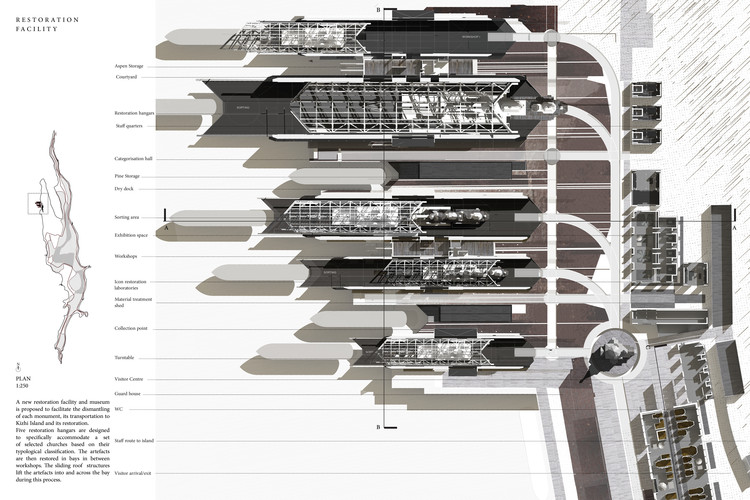 "This proposal is for a museum landscape that will restore and reassemble 250 wooden Orthodox churches on Kizhi Island in Northern Russia. The project explores the changing relationship between the Russian landscape and national identity, tracing back the influence of Romanticism at the start of the nineteenth century and looking at the wide-scale impact of Soviet collectivisation and de-ruralisation. ‘Kizhi Island’ addresses two challenges: it protects and restores a fragile heritage that is on the verge of extinction and dramatically redesigns the visitor experience on the island." Ben was tutored by Yeoryia Manolopoulou, Niall McLaughlin and Michiko Sumi.

The jury for the Silver Medal comprised of:

"The Helsinki Archipelago Town Hall provides a warm clubhouse and accommodation for the islanders’ overnight trips to Helsinki. It improves connections between the mainland and the archipelago by introducing a postal service to remote islands and providing a place for the Island Council to meet so that they can begin to improve transport links and promote the archipelago to ensure it is not forgotten." Ness was tutored by Rhys Cannon and Ben Addy.

The jury for the Bronze Medal comprised of:

"The dissertation looks at the conception, realisation and present state of the Russian city of Magnitogorsk as an experimental socialist utopia instigated by Joseph Stalin, asking how a political ideology of socialism was developed spatially in the city during the years 1930 to 1953. It seeks to determine how the current day city is both characterised by its past and how it is adapting to the social and political changes of Russia’s contemporary capitalist economy. The judges were unanimous that this was the most accomplished piece of work and the clear winner. They praised the dissertation for its excellent research across textual sources situating the subject in a historical, theoretical and socio-political context while also drawing from thorough and convincing first-hand experience of the city of Magnitogorsk and its people."

The jury for the Dissertation Medal comprised of:

A number of other awards were also awarded at the event, including the Serjeant Awards for Excellence in Drawing: