One of the most highly regarded architects of the 20th century, Walter Gropius (18 May 1883 – 5 July 1969) was one of the founding fathers of Modernism, and the founder of the Bauhaus, the German "School of Building" that embraced elements of art, architecture, graphic design, interior design, industrial design, and typography in its design, development and production.

Like many modernists of the period, Gropius was interested in the mechanization of work and the utilitarianism of newly developed factories. In 1908, he joined the studio of renowned German architect and industrial designer Peter Behrens, where he worked alongside two people who would also later become notable modernist architects: Le Corbusier and Mies van der Rohe.

However, of the three young architects at Behren's practice, Gropius was the first to put his Modernist ideas to work. In 1911, he and Adolf Meyer designed the Fagus Factory, a glass and steel cubic building which pioneered modern architectural devices such as glass curtain walls, and was built from the floor plans of the more traditional industrial architect Eduard Werner.

In 1919, Gropius took over as master of the Grand-Ducal Saxon School of Arts and Crafts in Weimar, promptly turning it into The Bauhaus. From then until 1933, the school was one of Europe's most progressive and influential schools of design, greatly influencing the current of modern art and architecture. The Bauhaus in Dessau was designed in 1925 by Gropius, who distilled his teachings into architectural elements of the building.

Gropius also contributed with published writings, discussing the Bauhaus Manifesto, the role of the artist, and the artist's relationship to his or her work. After emigrating to the United States, Gropius continued his teachings and exploring the Bauhaus ideal. While teaching at Harvard University, he lived with his family in the self-designed Gropius House.

After its closure by the Nazis in 1933, the Bauhaus rose in popularity in the Western world with an exhibition, organized by Gropius, at the Museum of Modern Art in New York. By the time Gropius died in 1969, his ideas on architecture and the Bauhaus itself had become a staple of modernist architecture.

Check out all of Gropius' designs featured on ArchDaily through the thumbnails below, and our coverage of the Bauhaus below those:

Infographic: The Bauhaus Movement and the School that Started it All 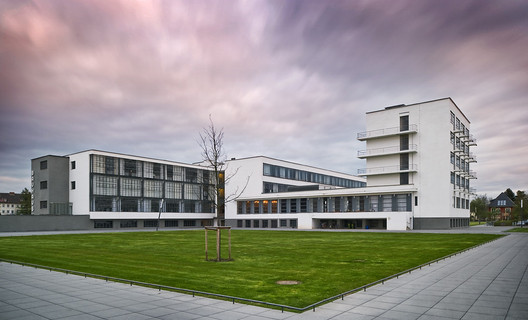