In 2005, the Busan International Architectural Culture Festival in South Korea organized a design competition for a new Busan Cinema Center that would be home to the Busan International Film Festival (BIFF). Austrian firm Coop Himmelb(l)au's radical design received first place and construction began in late 2008, finishing four years later in 2012. In its very short history, the building has already won the International Architecture Award and the Chicago Athenaeum in 2007 as well as a Guinness World Record for the "longest cantilever roof" in the world. The Coop Himmelb(l)au team has managed to successfully bring to life an architectural vision of a caliber seldom seen off of the drafting board.

According to Wolf D. Prix, the firm's Design Principal, the basic concept of this project was the discourse about the overlapping of open and closed spaces and of public and private areas. The design aims to provide a new intersection between public space, cultural programs, entertainment, technology and architecture, creating a vibrant landmark within the urban landscape.

First and foremost, however, the project - the firm's first in South Korea - addresses the theme of the roof as an architectural element – a topic which the firm has been concerned with for a long time. The team drew inspiration from the Renaissance and Baroque era cupola, the roof of Oscar Niemeyer's house in Rio de Janeiro as well as the sculptural roof of Le Corbusier's Unité d’Habitation.

Keeping in mind these powerful reinterpretations of the roof as an integral architectural element, Coop Himmelb(l)au developed the roofs of the Busan Cinema Center as a column-free covering of space that comes closest to the idea of a “flying” roof - further differentiated by its three-dimensionally articulated ceiling. LED saturated outdoor roof elements acting as a virtual sky connect building-objects and plaza-zones into a continuous, multifunctional public urban space. Media, technology, entertainment and leisure are merged in an open-architecture of changeable and tailored event experiences. The result is a responsive and changing space of flows acting as an urban catalyst for cultural exchange and transformation.

The dynamic LED lighting surface covering the undulating ceilings of the outdoor roof canopies gives the Busan Cinema Center its symbolic and representative iconographic feature. Artistic lighting programs tailored to events of the BIFF or the Municipality of Busan can be created by visual artists and displayed across the ceiling in full motion graphics, creating a lively urban situation at night, but also visible during the day.

While the movie theaters are located in a mountain-like building, the Center’s public space is shared between an outdoor cinema and a huge public space which is called the Red Carpet Area – i.e. reception area.The Red Carpet Area is actually three-dimensional: across a ramp which leads along a double cone, the guests of honour reach the reception hall. Each of the two areas is overarched by a huge roof, one of them measuring 60 x 120 meters – the size of a soccer field – and cantilevering 85 meters.

The now famous cantilever hovers over an urban plaza consisting of overlapping zones called the Urban Valley, the Red Carpet Zone, the Walk of Fame and the BIFF Canal Park. The building objects contain theater, indoor and outdoor cinemas, convention halls, office spaces, creative studios and dining areas in a mixture of sheltered and linked indoor and outdoor public spaces. The design of these spaces supports flexible, hybrid functionality that can be used both during the annual festival period and day-to-day use without interruption.

The urban zones defined by functional surfaces in plan are further articulated in a sectional dialogue between stone-clad “ground” forms of the Cinema Mountain and BIFF Hill, and the metal and LED clad “sky” elements of the roofs. The materiality of the building objects differentiates the spaces and articulates the architectural concept. Through their shape, placement and materiality, the various parts create a dynamic and informal tension between the ground and the roof.

Complete structural separation between the theater and the cinemas of Cinema Mountain ensures optimal noise isolation for the theater space, which is designed as a first-class, flexible hall with seating on two levels and optimal sight lines and adjustable acoustics. A flexible proscenium type stage with side stages and fly-tower accommodates movable acoustical towers used to close down the stage volume for concerts and operatic theater, but can be easily moved for theater, musicals and other staged events. The stage includes a fore-stage lift that can provide additional seating, an orchestra pit or stage extension as preferred. Horizontally tracking curtains along the walls of the audience chamber can be hidden or deployed to adjust the acoustics of the space.

An additional outdoor event ‘bowl’ is proposed surrounded by canals that can provide public and private boat access to the project site. Space for a future extension of the Busan Cinema Center project is proposed as an island among the canals, further integrating the cultural functions of the Busan Cinema Center project with the surrounding public space and landscape environment. 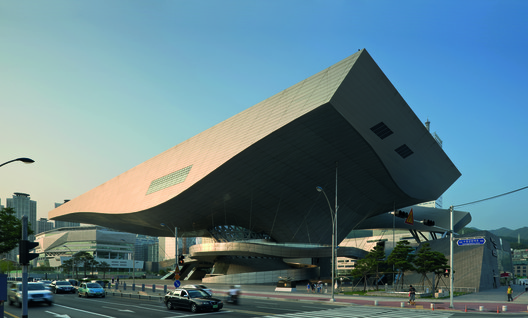