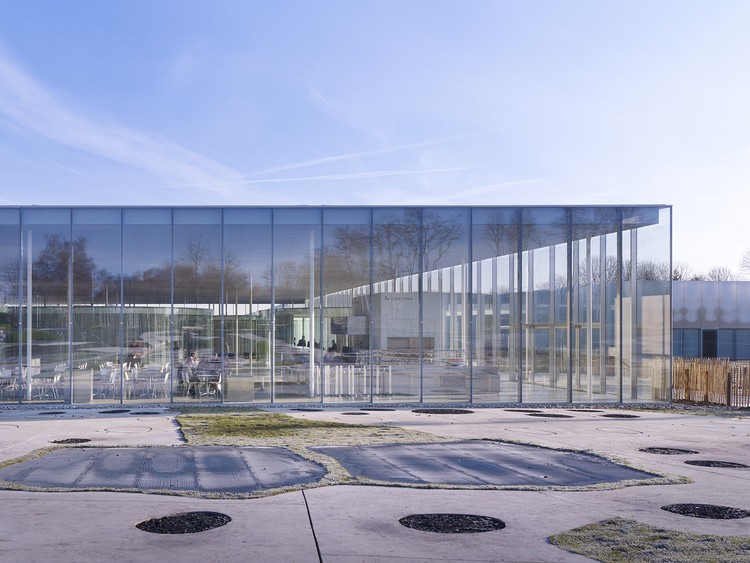 French photographer Julien Lanoo has shared with us a first look at the Musée du Louvre’s new sister gallery: Louvre Lens. The design, first conceived as part of an international competition in 2006, was created by the Pritzker Prize laureates of SANAA, in collaboration with New York studio Imrey Culbert, landscape designer Catherine Mosbach and museographer Studio Adrien Gardère.

The 360 meter long, steel and glass structure is integrated within a 20 hectare wasteland that was originally used as a coal mine before the 1960s. It is expected to attract 500,000 visitors every year and envisioned to help revitalize the post-industrial town.

Continue reading for the architects’ description.

Louvre Lens The choice of placing the museum on a former mine illustrates the intent of the museum to participate in the conversion of the mining area, while retaining the richness of its industrial past. The Louvre-Lens site is located on 20 hectares of wasteland that was once a major coal mine and has since been taken over by nature since its closing in 1960. The land presents some slight elevation, the result of excess fill from the mine.

The Japanese architects from SANAA, Kazuyo Sejima and Ryue Nishizawa wanted to avoid creating a dominating fortress, opting instead for a low, easily accessible structure that integrates into the site without imposing on it by its presence. The structure is made up of five building of steel and glass. There are four rectangles and one large square with slightly curved walls whose angles touch.

It is reminiscent of the Louvre palace, with its wings laid almost flat. The architects wanted to bring to mind boats on a river coming together to dock gently with each other. The facades are in polished aluminum, in which the park is reflected, ensuring continuity between the museum and the surrounding landscape. The roofs are partially in glass, reflecting a particular advantage to bringing in light, both for exhibiting the works and for being able to the sky from inside the building.

Natural light is controlled by means of a concealment device in the roof and interior shades forming the ceiling. Designed as an answer to the vaulted ceiling, the surface retains in its light the change of seasons, hours and exhibitions.

The entire structure of 28,000 square meters extends over 360 meters long from one end of a central foyer in transparent glass to the other. The buildings located to the East of the entrance – the Grande Galerie and the Glass Pavilion – primarily house the Louvre’s collections.

To the West of the entrance is the temporary exhibition gallery and La Scène, a vast – new generation – auditorium, whose programs are in direct relation with the exhibitions.

The museum also includes a large, invisible, two level space, buried deep in fill from the site. This space will be dedicated to service functions for the public, but will also be used for storage and logistical functions of the museum. Two independent buildings house the administrative services, to the South, and a restaurant, to the North, thus establishing a link between the museum, the park and the city. 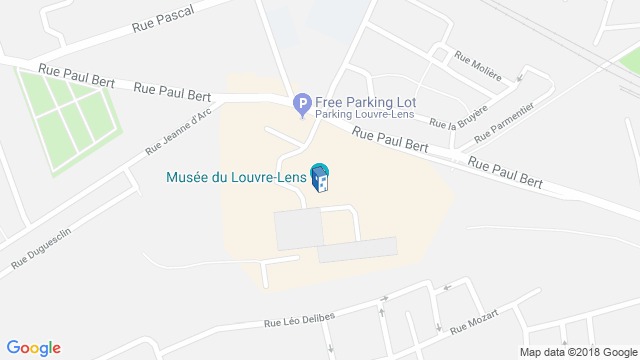