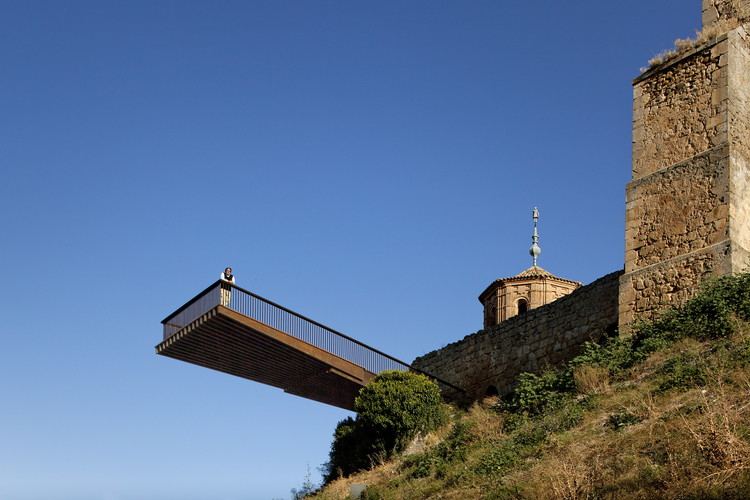 Settled in the middle of the Castillian Landscape, the historical town of Almazan appears strategically on the top of a walled hill, and in the higher point is where the historical remains are surrounded by the piazza, with a strong medieval flavor.

Surrounded by extraordinary monumental buildings, the Plaza Mayor de Almazan is shaped as a clear example of "Spanish Square" in the historic city. Its location on top of a watchtower and the edge of a meander of the Douro river, makes  it  a public space with a great landscape value, sharing the limelight with the sXII Wall, the Palace of Hurtado de Mendoza (s.XV) and the Church of San Miguel (sXII).

In the edition of "Statistical Gazetteer-historical-Spain and its overseas possessions", edited by Pascual Madoz in 1845, one of the earliest descriptions of the Plaza de Almazan, the square is described as "nearly perfect rectangular," and added as a notable feature that "only has a corner."

Prior to our intervention, the place retained its original form and its grim character, but it was largely occupied by surface car  parking and various obstacles; the city and its inhabitants detected this and many others  shortcomings which were reflected in a previous report, which inspired the drafting of the specifications of the competition.

As a principal desire featured in the competition bases was to reorder the square, release of obstacles and achieve a cleaner environment which highlight both day and night the remarkable historical buildings that make up the main attractions of this town.

Also from the beginning we were asked to rescue the historic connection with the beautiful surrounding landscape, facilitating the direct output from the square to the old walls over the river Douro, and solving the stair to go down to the river.

The commission was obtained in the open ideas competition organized by the Almazan City Council in 2008 to solve a list of problems and necessities neighbours and rulers detected in their town.

The list of contest rules called for achieving "conceptual, typological and architectural Plaza, its connection to the Paseo de Ronda and the streets rushing it."

The municipality wanted to "create a continuous floor spreading throughout the Plaza absorbing the existing slopes and solving the problems of accessibility to historic buildings that define, highlighting the monumental character of the set"

Also to release the maximum parking spaces for the Plaza area in order to  have a better use as free urban spaces. Semi-pedestrianize the area would also serve to enhance trade in the area, and leisure services.

Highlight the historic buildings located in lighting that is distinct from general illumination and reorder the street furniture, trees and vegetation trying not to interfere with traffic zone (residual) and the passage of processions , freeing the central area of the Plaza.

W were also asked for adequately resolve the relationship of the square with the topography immediately to the river and the scenery distinguishing feature of this square with the type characteristic of the Plaza Mayor Castellana.

Thus, we must establish a visual relationship between the geometric center of the square and the viewpoints on the Duero integrating them in the Plaza. Redesigning the sequence of viewpoints of the river and the woods surrounding the Plaza. Creating a walking tour around San Miguel and the City through gateways, flown items, etc..

Respecting the burial of the recently executed infrastructure networks and make connections to existing infrastructure and bury the containers for selective collection of waste. "

These requirements were intended to address a budget of around 2,500,000 €

Reshaping the Plaza Mayor de Almazan carried out after his election as the winning proposal Ideas Contest organized by the Ministry of Housing and the City of Almazan in 2008. The intervention, 6.900m ² approximately, focuses on the recovery of the historical values of the Plaza and its relationship to the cultural and landscape in which it is located.

Through the topography, the furniture, the traces and the materiality of the pavement, the project strengthens the original configuration of the "rectangular" and retrieves their own spaces as "the corner".

The area for the wheeled vehicle is reduced, the pedestrian regains its role as a leading figure in the public space, and the cultural reconquest historical prominence he had lost over the years, having on mind the inspiration of  classic “piazzas” as Siena, Verona….

The remodeling is completed solving immediate surrounding areas give the Plaza a global dimension in their relationship with the city and the landscape. It casts a new staircase that connects the Plaza Mayor to the Round of the Douro that runs along the river, thus resolving the difference in height and connectivity between these two areas. In turn, the compositional design of the ladder is drawn into the landscape outside the walls as a canvas wall that complements the layout of the historic wall.

Important point of the proposal were the two new viewpoints that  "sew" the square with the beautiful surrounding landscape: one in San Miguel of the wall, with access from the Main Square, overlooking the landscape, and another on the river Duero, with access from Round River which completes the action in perimeter zones. Like the ladder, the viewpoints in the scene were conceived as timeless architectural elements. The choice of wood as main material and the use of a cantilevered structure that minimizes contact with existing buildings, enabling integration of these new buildings respecting the historical perspective of Almazan.

The redevelopment of the Plaza, once overcome the discomfort of the construction works, has given a new projection of the old town of Almazan.

People now enjoy the terraces of the bars placed in the square, the space gained to the car and rest under trees in relaxing areas.

Tourists and residents, many of them retired, can experience  a completely accessible parkour.

The viewpoints  "precariously"cantilevered are a new attraction for locals and tourists, who in a brief gesture can spend the urban environment to enjoy the skyline and landscape.

The performance has dignified the villa and has boosted tourism , one of the main drivers of the town's economy. 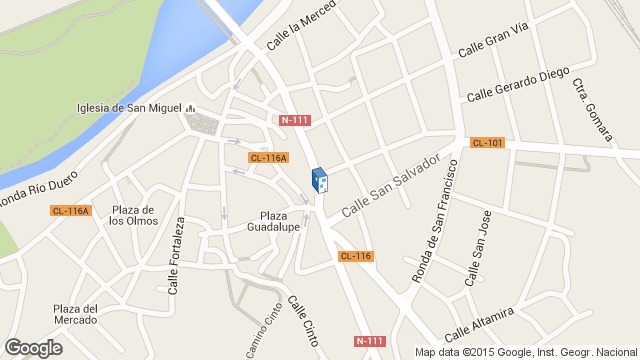 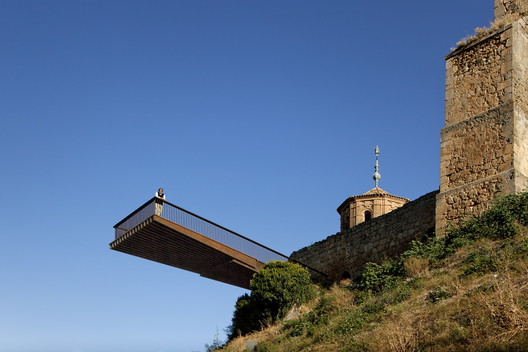