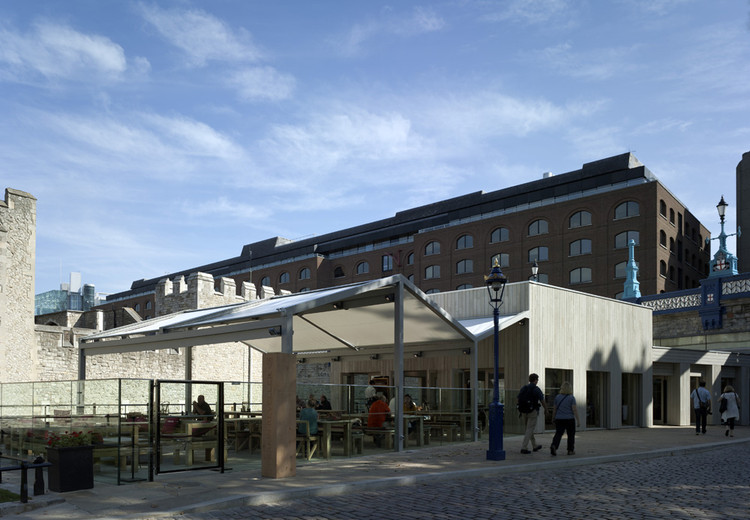 Text description provided by the architects. Tony Fretton Architects has completed a new-build café and restaurant in one of London’s and theworld’s most historically significant locations, the Tower of London.

The site forms the intersection between Tower Bridge and the UNESCO world heritage site of theTower of London on the historic Tower Wharf to the Thames overlooking the Greater LondonAssembly building and HMS Belfast.

Commissioned by Historic Royal Palaces, Tower Wharf Café provides indoor and alfresco dining on thewharf, serving the 2.5 million tourists that visit the Tower of London each year. It adds to an assemblyof pavilions, including a ticket office and river frontage kiosks. Positioned closer to the Tower andfurther from the main tourist entrance than these kiosks, the new building demanded a design that isvisibly striking and fanciful. It takes its cue from the Tower itself instead of the hi-tech architecture of theneighbouring City district or generic garden pavilion architecture.

The new building responds playfully to the Tower’s outer wall, an assembly of towers and curtainwalls of differing height and form. It is made up of four linked volumes, housed in two discrete forms:one is like the castellated wall turned upside down with the space between the battlements becomingglazed recesses. The other is a long low-rise form joining the arch under Tower Bridge. Both are cladin rough sawn English Sweet Chestnut timber in a vertical formation. The timber is painted grey tomatch the hues and tones of the Kentish Ragstone rubble with limestone dressing of the Tower Wallsand the Cornish granite blocks with Portland Stone dressing of the bridge. The use of rough timbercontinues the tradition of using the material in the utilitarian buildings that have historically occupiedthis site on the wharf.

The entrance is via a glazed lobby at the centre of the wharf elevation into a tall dining room and bar,a light-filled space characterised by a central oculus skylight. A narrow band of glazing at the westernend provides a light-of-touch interface between the new building and the arches, giving diners anunexpected view upwards to Tower Bridge.

The dining hall opens out at the eastern end into an expansive glass-walled terrace paved with smoothsawn Yorkstone with elongated slabs demarking the remains of a historic wall on the site dating fromthe seventeenth century. A pitched roof of motorized retractable blinds and sophisticated gutteringsystem ensures that the terrace can be used in all weathers.

Tower Wharf Café is a significant addition to London’s cultural and historical riverside. The designdemonstrates sensitivity to the heritage of the Tower whilst acknowledging the popular culture of thewharf. 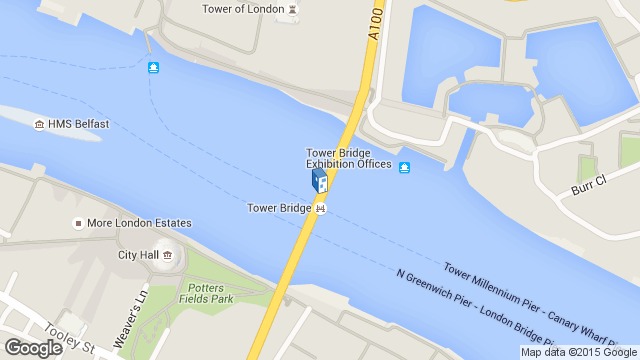 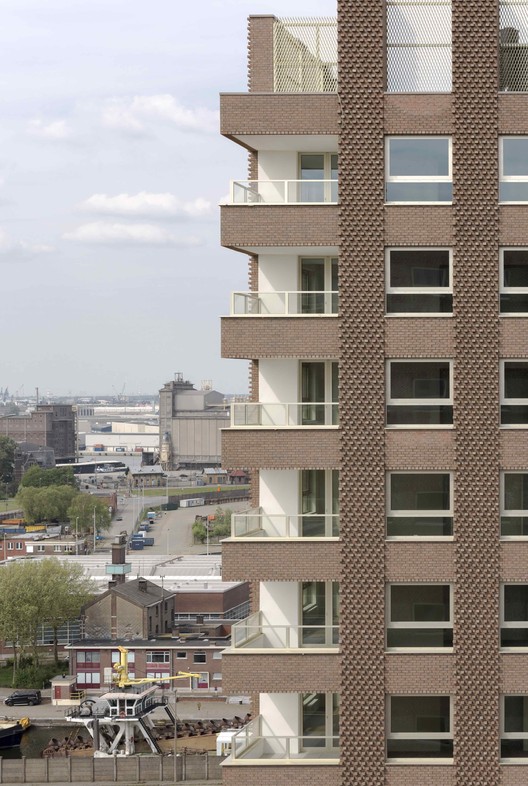 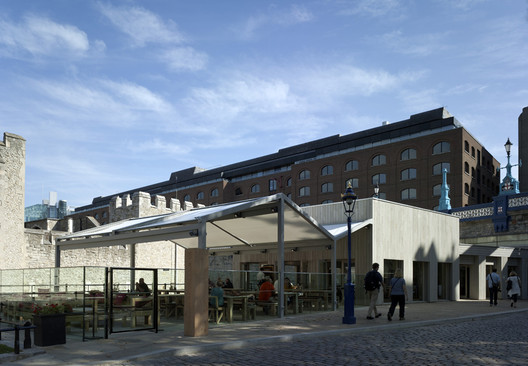