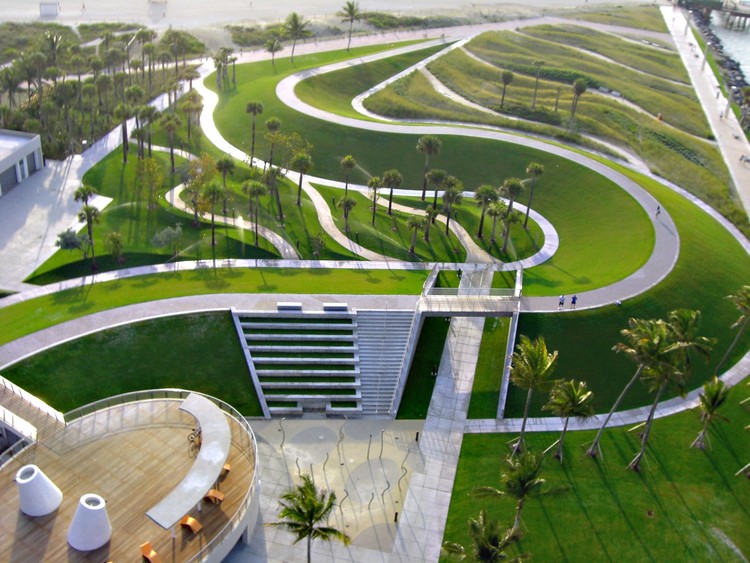 Text description provided by the architects. The revitalization of this underutilized public park transforms it into a neighborhood and regional destination through the integration of diversified urban park programs, regional gardens and restored native habitats, and the connection with urban circulation systems. By unifying its three edges – urban, cruise ship passage and beach – it becomes a center that, through the resolution of overlapping cultural, programmatic and environmental requirements, will contribute to the open space life in Miami for decades to come.

South Pointe Park creates an animated and ecologically sensitive community park in lively and flamboyant South Beach. The park is a redesign of an existing 19 acre park along Government Cut, an artificial inlet to Biscayne Bay at the Atlantic Ocean coast. The now 22 acre park positions two corresponding circulation paths – the Serpentine Walk and the Cut Walk – across its length to provide critical regional connections and views out to Government Cut and the Atlantic Ocean. The paths connect to both the Baywalk that traverses the Biscayne Bay coast, and the Beach Walk which provides access along the Atlantic Ocean. The 1800 foot long linear Cutwalk, a waterfront promenade along Government Cut, acts as a datum, rising between 12-18” above the grade of the park across its length. The height of the path gives it the heft of a sculptural object and sets it apart from the surface of the park. Constructed from Dominican Keystone, a stone of fossilized coral, the materiality suggests the natural processes of the adjacent sea. From the park, the path is perceived both as object and line, while the experience on the path heightens the sense of spectatorship. This pathway encourages the theater of the promenade, and provides the ideal viewing platform for the massive cruise ships entering and leaving Biscayne Bay.

In counterpoint to the strong linear move of the Cutwalk, a serpentine landform with leisurely twists and turns begins at the Atlantic Ocean Beach Walk, rises up to allow dramatic views out to the Atlantic Ocean, and access to the top of the pavilion structure and continues west until it meets the Bay Walk. The landform encourages spirited movement along it, and the heightened experience of an ever-changing visual field of movement is enlivened and enthralling. The twisting of the landform is echoed as a motif throughout the park in smaller garden areas. Sinuous bands of native dune plantings on the ocean side of the serpentine landform are contrasted with abstracted dune landforms and palm trees on the inside slope of the serpentine. A smaller garden area of coastal hammock plantings of native ground covers, palms and deciduous trees echo the twisting path of the landform. A bosque of palms with understory grasses and ferns creates a buffer to the urban context along the northern edge of the park. The design integrates the park into the urban fabric by extending two major streets – Washington Avenue and Ocean Drive – into the park with generous hardscape entry plazas.

At the interior of the park a pavilion with café and facilities creates a point of rest. A seatwall amphitheater creates an informal staging area and seating overlooking the water playground. The park also features three areas of open lawn which support free and flexible program. These areas of lawn are planted with salt tolerant turfgrasses to withstand active use and are engineered to retain water after tropical storm events. Mature trees from the site were stored during construction and then replanted on the lawn, achieving an immediate visual impact at the opening of the park. Another design challenge was to integrate the existing restaurant within the park as it provides revenue for the city’s ongoing maintenance of the park. In order to bring vehicular access and parking close to the restaurant, the design creates an urban entrance edge. Also outdoor dining terraces flank the Cut Walk, emphasizing the circulation of the park while accommodating the restaurant programming within it.

The selection of project materials was significantly influenced by the project context with particular emphasis was placed on constructing the park with high-quality materials that reflect the City’s growing prominence as an international destination. Also, the park’s context at the edge of the Atlantic Ocean and the pervasive humid, sub-tropical climate of South Florida required the selection of durable materials that have the capacity to withstand not only heavy, urban park use, but also the strong erosive forces of the coastal environment, such as salt spray, hurricane force winds and tropical storm deluges. Materials and finishes adapted to both contexts such as marine-grade stainless steel with high-quality finishes to deter advanced weathering due to salt spray and the use of wood was limited to sustainably-harvested ipe, to withstand wide and rapid fluctuations in moisture while providing a long lifespan in an environment where other woods would be subject to advanced rot and decay. Paving materials were designed for long-term durability but to also reflect the regional geomorphology. Dominican keystone, shell aggregate concrete paving, and coquina pathways draw visual and tactile connections to the larger geologic context underpinning the site. The planting palette focuses on regional, endemic plant communities. The planting design reflects the park’s various program uses while creating a simple and powerful visual language to define park spaces

The Park’s immediate adjacency to sensitive environments required extensive coordination with local and state agencies to ensure compliance with the stringent coastal and environmental permitting requirements. Buildings and structures were designed to safely accommodate coastal storms and hurricane forces. Grading and earthwork included the use of indigenous limerock for subgrade construction and beach-quality sand in areas of beach dune restoration. Custom site lighting was designed to provide a signature night-time experience and announce the point of passage to cruise ships and they signify the annual phenomena of sea turtles retuning to the beach to nest. During the six month turtle nesting season, pylon lights change to an amber long wavelength light which does not interfere with hatchlings and their return to the ocean.

Given the project’s immediate adjacency to sensitive coastal hydrology and includes an integrated system of rainwater collection and harvesting. Nearly all the rainwater that falls on the 22-acre site is harvested and retained on site. To address the seasonal sub-tropical rainfalls of south Florida, site grading was utilized to direct surface flow during small rain events into large areas of native plantings, which allow for infiltration and to minimize reliance on traditional drainage structures. During 25-year or greater storm events, lawn areas serve as temporary detention basins that replenish deep aquifers (through injection wells) and thereby prevent stormwater from entering the Ocean, Bay or Inlet.

The planting design concept reflects the park’s various program uses while creating a simple and powerful visual language to define these park spaces. To achieve an immediate visual impact, over 450 existing trees and palms were transplanted to an on-site nursery then relocated once major construction was completed. The park’s active recreation zones were planted with Seashore Paspalum, a drought and salt tolerant grass, and embraced by an informal massing of native Sabal Palms and Coconut Palms. Along the ocean side, a series of man-made dunes and coquina shell paths lead through masses of native/xeric coastal vegetation, including Sea Oats, Railroad Vine, Gaillardia, Necklace Pod and Yucca species. Along the north promenade to the Beach, a series of planted bosques buffers the view both to and from the adjacent residential development, and is designed to augment the native habitat of the more informally planted hammock areas. The Ocean Drive Promenade is planted with native Green Buttonwoods, and alternating bands of flowering native groundcovers. 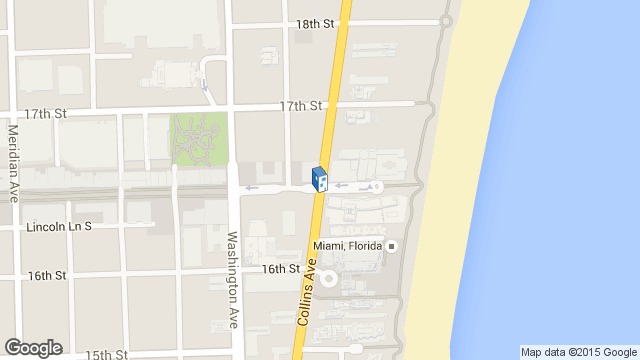 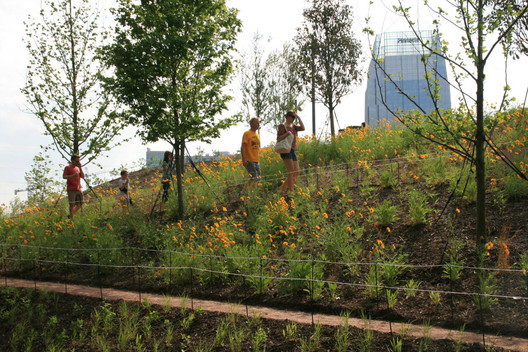 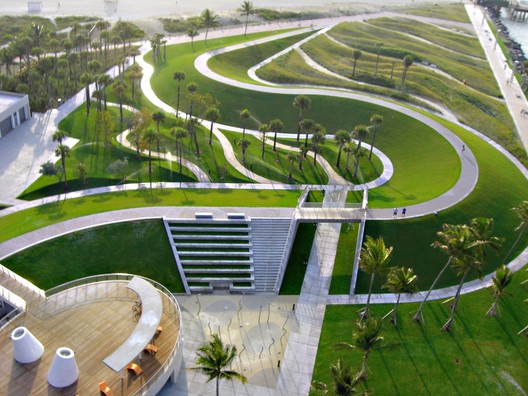