The New York Public Library has revealed plans for the transformation of their iconic main branch on 42nd Street and Fifth Avenue, the Stephen A. Schwarzman Building. Led by Mecanoo with Beyer Blinder Belle, the $317 million masterplan will increase accessibility to the library as well as increase public space for research, exhibitions and educational programs by 20%.

“For over a century, the Schwarzman Building has been a beacon of open access to information and a tireless preservationist of the world’s knowledge,” said New York Public Library President Tony Marx. “We have a responsibility to preserve its architectural wonder and its role as an important civic space, while also preparing it for the future, and another century of best serving the public. We believe this plan does just that.” 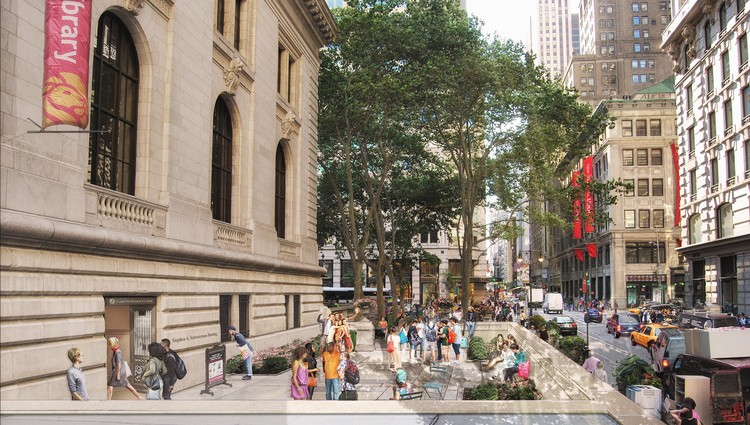 The New York Public Library has revealed the first renderings of Mecanoo and Beyer Blinder Belle’s renovation of the NYPL’s Mid-Manhattan Library at the corner of 5th Avenue and 40th Street, diagonally across from the library’s main branch, the Stephen A. Schwarzman Building on Bryant Park. The $200 million project will increase seats, expand services and add public space to the building, which receives 1.7 million annual visits and constitutes the NYPL’s largest circulating branch.

“New Yorkers will soon have the central circulating library that they need and deserve,” said NYPL President Tony Marx. “This library will transform lives by providing books, classes, and programs for New Yorkers of all ages, and it will transform our city – as it will be a model for how libraries can strengthen communities.”

After being closed for a two-year restoration, the New York Public Library’s historic Rose Main Reading Room and Bill Blass Public Catalog Room will reopen to the public ahead of schedule on Wednesday, October 5th at 10am.

The $12 million project, managed by Tishman Construction Corporation, came about in May 2014 when an ornamental plaster rosette fell 52 feet from the Reading Room’s ceiling. In addition to recreating and replacing this piece, all 900 rosettes in both rooms were reinforced with steel cables. Other work included the recreation of a 27′ x 33′ James Wall Finn mural on the ceiling of the Catalog Room and the restoration of the chandeliers. To mark the occasion, the NYPL has shared an incredible collection of photographs documenting the restoration work and the Rose Main Reading Room with nearly all scaffolding removed. 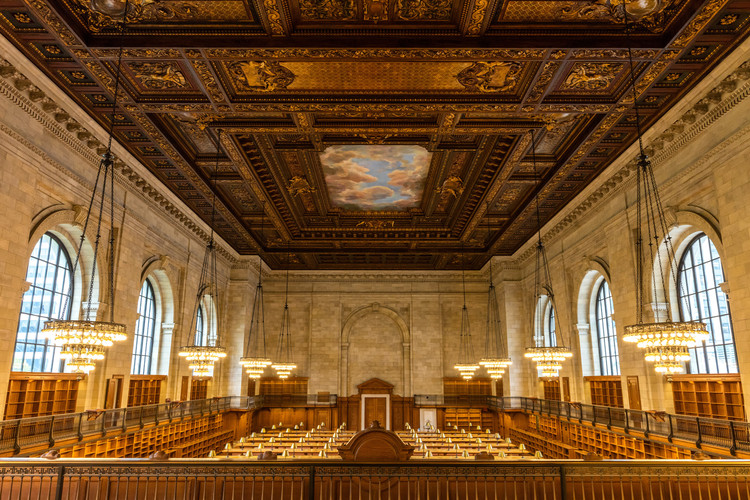 Last week the New York Public Library made over 180,000 images from their digital archives available in the public domain, and free for high-resolution download. Not only are the images available for download, but since they are in the public domain and free of any copyright restrictions, users have the freedom to get creative and alter, modify, and reuse the images in any manner they see fit. Featuring a wide variety of images including drawings, engravings, photographs, maps, postcards, and in some cases, digitized copies of entire books, the collection has been noted for fascinating historical artifacts such as a set of color drawings of Egyptian gods and goddesses, and a digitized book from the 18th century containing over 400 color plates depicting various current and historical fashion trends.

The project is also collaborative, asking visitors on the site to comment on photographs with "what's there now, what's changed, and what's stayed the same." Users can edit or add to captions on the back of each of the photos, creating a personal element in the latest retelling of New York's vibrant history. 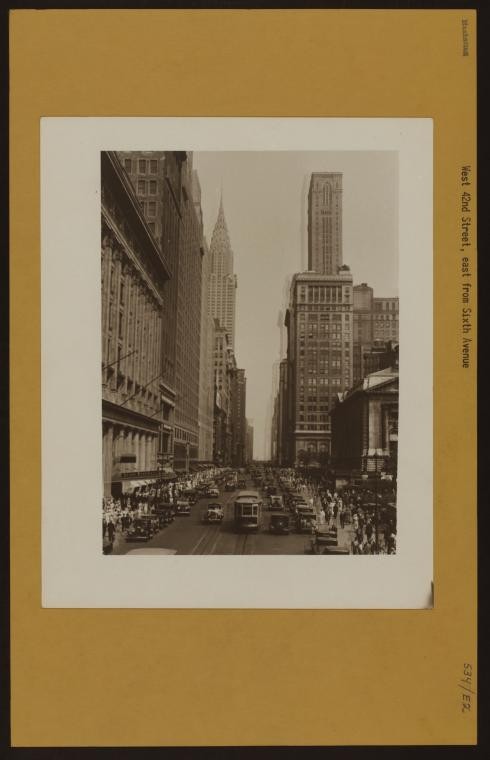 Michael Kimmelman Discusses The Importance Of Advocacy In Architectural Criticism

In an interview with Erika Allen for The New York Times, Michael Kimmelman discusses "architecture criticism and the dangers of demolition." Kimmelman, the NYT's architecture critic, has built a reputation as someone who advocates for buildings under threat, his most well known "fight" being against renovation plans drawn up by Foster + Partners for the New York Public Library in Manhattan. Referencing his latest column, in which he shows support for the threatened Orange County Government Centre, Kimmelman elaborates on his critical position and why he believes that speaking out for buildings at risk is "necessary."

Details have been released on the New York Public Library’s (NYPL) plan to renovate its Mid-Manhattan branch, while creating more public space within its flagship Stephen A. Schwarzman Building. The news comes shortly after Foster + Partner’s redesign of the the Beaux-Arts landmark was scrapped due to concerns of a ballooning budget. The revised $300 million overhaul suggests a more affordable option of relocating Schwarzman’s main stacks beneath Bryant Park, while establishing a more campus-like connection with a fully renovated Mid-Manhattan branch. All the details, here.

The New York Public Library (NYPL) has abandoned Norman Foster's controversial plans to transform part of its 20th century Carrère and Hastings “masterpiece” into a circulating library. The news doesn’t come as much of a surprise, considering the city’s new mayor, Bill de Blasio expressed skepticism towards the $150 million renovation earlier this year.

According to a report by the New York Times, Blasio does not intend on reducing the NYPL funding, however the money will now be allocated to other purposes.

Several library trustees have stated that in order to keep up with the cultural shift from traditional stacks to online resources, they now intend on completing the renovation of the library's mid-Manhattan branch on Fifth Avenue.

A response from Norman Foster, after the break...

Foster + Partner's controversial renovation plans for the New York Public Library (NYPL) are currently in a state of limbo while the city decides their course of action. Foster's proposal for the 20th century Carrère and Hastings "masterpiece" on 5th Avenue is a response to the cultural shift from traditional stacks to online resources, as the library has experienced a 41% decrease in the use of collections over the last 15 years.

Join architectural historian Judith Dupré and renowned architects Adrian Smith and Rick Cook to explore the latest environmental innovations in skyscrapers. The look of cities is changing as designers and builders realize that the best tall buildings arise from working, as the ancients did, hand in hand with nature. Tapping into the elemental forces of the sun, wind, and water, today’s green skyscrapers are pushing the extreme frontiers of environmental, structural, and creative possibility. That sensibility is also strengthening bonds between architects and engineers who, more than ever, are joining forces to find aesthetically pleasing, environmentally astute solutions.

When applying “major surgery” to a beloved, 20th century “masterpiece”, you’re going to face some harsh criticism. Such is the case for Norman Foster, as the legendary British architect has been receiving intense backlash from New York’s toughest critics for his proposed renovation to the New York Public Library. First, the late Ada Louise Huxtable exclaimed, “You don’t “update” a masterpiece.” Now, the New York Time’s architecture critic Michael Kimmelman claims the design is “not worthy” of Foster and believes the rising budget to be suspect.

More on Kimmelman's critique and Foster’s response after the break...

The New York Public Library has a plan to save millions of dollars, improve efficiency, and reverse the cutbacks that have been plaguing it. How? By sending little-used resources off-site (after all, most people use the library for its online resources these days), the Library will consolidate three libraries into one Mid-Manhattan branch, renovating the building with a streamlined, efficient design - courtesy of Foster + Partners - to create "the largest combined research and circulating library in the country."

It sounds like a wonderful, modern solution. Ms. Alda Louis Huxtable would beg to differ.

The former New York Times architecture critic and current critic for the Wall Street Journal has come out swinging against the plan. First, she builds on the critique that others have made, that by moving volumes off-site (to New Jersey, or "Siberia, as she puts it) to make room for more modern amenities, the library will devalue its primary purpose (making resources readily accessible). To put it another way, as Scott Sherman did in his article for The Nation, it would turn the library into “a glorified internet café.” Then, Huxtable makes her own argument: that removing the current, intricate system of stacks would be an enormously complex, expensive, and hopelessly misguided structural challenge.

But, ultimately Ms. Huxtable’s argument comes down to the intrinsic architectural and cultural value of this Beaux Arts Masterpiece: “You don't "update" a masterpiece.”

More on the Ms. Huxtable incendiary critique of The New York Public Library’s Central Plan, after the break...