Save
18 Useful Research Resources for Architects Online
Share
Or
Copy

JSTOR is a must-know, and one that you’ve probably come across before. JSTOR contains digitized back issues of leading academic journals, current issues of journals, books and primary sources. JSTOR’s digital library has a number of excellent architectural publications, and has broad coverage of humanities, sciences, and social sciences.

Well-known for its Case Study House program, Arts & Architecture magazine highlighted the development of single-family dwellings during the Post-war period, with specific focus on the work of Southern California architects like Richard Neutra, Rudolf Schindler, Charles Eames, Frank Lloyd Wright, and John Lautner among others. Published from 1929 until 1967, the website now dedicated to cataloging Arts & Architecture offers digitized versions of selected articles from 1945 onwards, as well as full issues from the magazine's last 11 years.

Created by North Carolina Modernist Homes (NCMH) and Hanley Wood (parent company of ARCHITECT), Colossus focuses on 20th century architectural publications, and especially on designs from the 60s, 70s and 80s. When complete, the digital archive will provide over 1.3 million pages, becoming the largest online reference for modernist architecture.

The hugely influential Archigram group was active from 1961 to 1974, and their work has now been digitized. Students from the University of Westminster created this platform in collaboration with the remaining members of Archigram or their heirs. The database include digital versions of drawings, collages, paintings, photographs, magazines, articles, slides and multi-media material, and original texts by Archigram where available. Given that most of Archigram’s work remained unbuilt, its digitization provides a poetic structure to the collective output of the architects involved.

In 2014, Getty Publication launched its virtual library, featuring over 250 titles to read for free online. Works published by Getty Publication complement the work of the J. Paul Getty Museum, the Getty Conservation Institute, and the Getty Research Institute. The library’s resources cover architecture, but also art, photography, archaeology, conservation, and the humanities at large. You can also find interesting material on Getty’s education portal.

With over 21 million publications, ISSUU is an engaging publishing platform for magazines, catalogs, and newspapers, and has become a go-to platform for small publishers and individuals who want to make their work available online. The digital media company offers both leading and emerging titles, on subjects of culture, arts, lifestyle, and (most importantly) architecture.

Archnet focuses on the built environment and iconic buildings of the Islamic World, and provides a wide range of documentation: images, drawings, publications, seminar proceedings, articles, monographs and architect’s archives. This research tool is a must-see for people interested in Islamic Art and Architecture.

You may know the Royal Institute of British Architects for their awards and advocacy for the British architecture industry—but did you know RIBA also has its online image library? RIBApix features over 85,000 digital images issued from the British Architectural Library. From iconic buildings, to street scenes and vernacular architecture, the platform gives photographic evidence from different historical periods. The collection is frequently updated with recently built projects, and covers interior design, landscape, topography, planning, construction and the decorative arts. All images can be downloaded in low resolution for free, and can be purchased to illustrate a publication.

In 2014, the British branch of the famous film and production company Pathé released 85,000 videos on their Youtube channel to watch for free in high resolution. The archive contains films produced from 1910 to 1970, and is incredible in terms of scope, covering notable subjects on architecture and design, such as the construction of the Empire State Building, Frank Lloyd Wright’s Johnson Wax Building, Le Corbusier’s Couvent de la Tourrette, and Montreal’s Expo’ 67 and the construction of Buckminster Fuller’s geodesic dome.

The Architectural Association’s online photo library contains 8,000 images that represent the highlights of the school’s broader collection. Slides, negatives and prints of historical and contemporary architecture are available in low resolution for educational purposes, but can also be purchased for commercial use. The AA also offers photographs of its students’ work since the 1880s, as well as a video archive for its lectures, conferences, and symposia.

The Courtauld Institute offers online access to some major primary sources and images of its collection. The online database includes 40,000 photographs, cuttings, architectural drawings, and publications, spanning the 19th, 20th and 21st centuries. Although the Courtauld is best-known as an art history institution, its Conway library focuses on architecture and is a valuable resource for researchers and students alike.

Harvard Library’s VIA (Visual Information Access) provides descriptive records, architectural drawings, and photographs. All images are available for educational use only.

New York Public Library’s photographic archive offers over 180,000 high resolution images that are public domain and not subject to copyright restrictions. These images chronicle New York’s street scenes and historical buildings, and include incredible documentation on the design of the Chrysler building, and construction of the Woolworth building. But the library also has panels of photographs from demolished or destroyed buildings across the world, like London’s Crystal Palace demolished in 1936.

On ArchInform, you will find complete biographies of architects, and descriptions of the buildings that shaped their career. Buildings under construction, completed buildings, and unbuilt projects, as well as awards received and publications are all listed on the website. Moreover, ArchInform has a very wide database that gives credit to both famous and less well-known architects.

The Society of Architectural Historians offers an architectural encyclopedia for SAH members or those with a subscription to the University of Virginia Press, but their free version includes notable articles on 100 historically-important buildings in each US state.

Run by Ross Wolfe, this blog presents excerpts of primary sources and historical material. Although it is not an archive in the stricter sense, this platform can prove very useful when researching on Modernist Architecture in Germany and Eastern Countries, and on Russian Constructivism.

Run by the Internet Archive—who you may have heard of thanks to "the Wayback Machine" or any number of their other archival missions—this ever-expanding collection of monthly publications and digitized magazine so far features archives of “The Builder,” the UK’s oldest and most comprehensive magazine on the building industry that dates back to the 19th century.

The magazine Canadian Architect has shared digital archives of its publications since 2008. Articles report on architectural practices in Canada, review designs across the country, explore newly built projects, and look at the use of new technology in current practices. 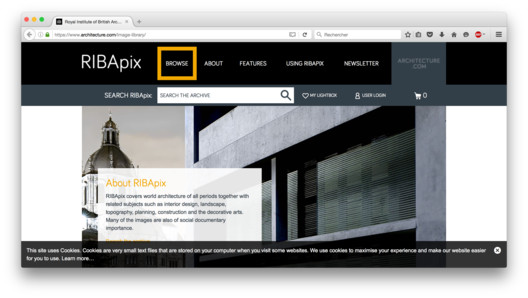