Earlier we brought to you WORKac‘s preliminary scheme for the transformation of Salem-Keizer, Oregon. We would now like to present the final scheme presented by Amale Andraos and Dan Wood. The project integrates elements of the city and nature across an existing 200 acre big box retail site. WORKac is one of five interdisciplinary teams participating in “MoMA’s Foreclosed: Rehousing the American Dream.” Each team is challenged to re-imagine struggling American cities and suburbs, seeing the current economic crisis as an opportunity to evolve.

Jeanne Gang presents Studio Gang’s vision for the transformation of Cicero, Illinois, a 1920’s suburb that suffered greatly from the foreclosure crisis. Studio Gang is one of five interdisciplinary teams participating in “MoMA’s Foreclosed: Rehousing the American Dream.” Each team is challenged to re-imagine struggling American cities and suburbs, seeing the current economic crisis as an opportunity to evolve.

Sum of Days at The MoMA / Carlito Carvalhosa

The space of sound created by Carlito Carvalhosa’s Sum of Days on exhibit at MoMA until November 14, 2011 is a sublime environment of billowing white fabric and the white noise of the atrium reflected upon itself. The psuedo-boundaries established by the translucent material that hang from the ceiling create a confined space of light and ambient sound – fleeting and ephemeral. Upon entering the exhibit, you pass an array of speakers affixed to the wall. They are emitting a low hum – the sound of voices and echoes that are distant, yet recognizable. It is unclear at first from where these sounds are originating, but behind the fabric bodies are drifting in and out of view. The curtains, which are constantly swaying, direct you in an ellipse to the center of the space where a single microphone hangs, picking up the noise within the exhibit and sending them to the dozens of speakers that hang at intervals inside the curtains, along the walls of the exhibit, and up through the galleries at the mezzanine levels that overlook the atrium.

NEW YORK–Although the American Folk Art Museum has avoided dissolution thanks to a cash infusion from trustees and the Ford Foundation, the institution’s ongoing financial troubles raise difficult questions about the relationship between signature architecture and cultural capital.

This weekend, we had the opportunity to attend the Open Studio event at MoMA’s PS1. As we mentioned earlier, this project posed the daunting question of how to re-think, re-organize and re-energize the concept of an American suburb in the wake of the foreclosure crisis. As MoMA’s Philip Johnson Chief Curator of Architecture and Design, Barry Bergdoll explains, “Projects will aim to challenge cultural assumptions concerning home ownership and associated settlement patterns, such as suburban sprawl, and assist the public in contemplating a potentially different future for housing and cities. The workshop and exhibition are premised on reframing the current crisis as an opportunity, an approach that is in keeping with the fundamental American ethos where challenging circumstances engender innovation and out-of-the-box thinking. It is our hope that new paradigms of architecture and regional and transportation planning become the silver lining in the crisis of home ownership.” The five multidisciplinary teams chose five different American suburbs to explore, and this Saturday, we jumped from Oregon to Florida, to Illinois, to California and New Jersey, to observe their five quite different solutions.

Check out our preview of the teams’ work-in-progress projects which will be exhibited at the MoMA this February.

In the wake of Hurricane Irene it only seemed appropriate to take a second look at Rising Current, an exhibit that was featured at the MoMA just last year. To give you a refresher, the exhibit was a cohesive showcase of five projects tackling the lingering truth that within a few years, the waterfront of the New York harbor will drastically change.

Rising Current provided an emphasis on how to re-think the city, relevant before, and even more pressing now after the flooding from the hurricane. Let’s hope that the ideas for solutions that were generated from the exhibit can now be considered for implementation. More about Rising Currents and Team Zero’s solution following the break.

The community based winning design for the 2011 Young Architects Program at the P.S.1, “Holding Pattern” by Interboro Partners, shared photographs of the installations canopy raising which took place last Thursday at MoMA. The New York firm, formed by Tobias Armborst, Daniel D’Oca, and Georgeen Theodore, were able to creatively accomplish the design within the Young Architects Program’s budget and program requirements, stretching the funds to essentially serve two purposes; as the materials will be recycled, donating the objects such as ping pong tables, benches, and flood lights, to the community at the end of the installation. ”Holding Pattern” will welcome visitors beginning June 19th. 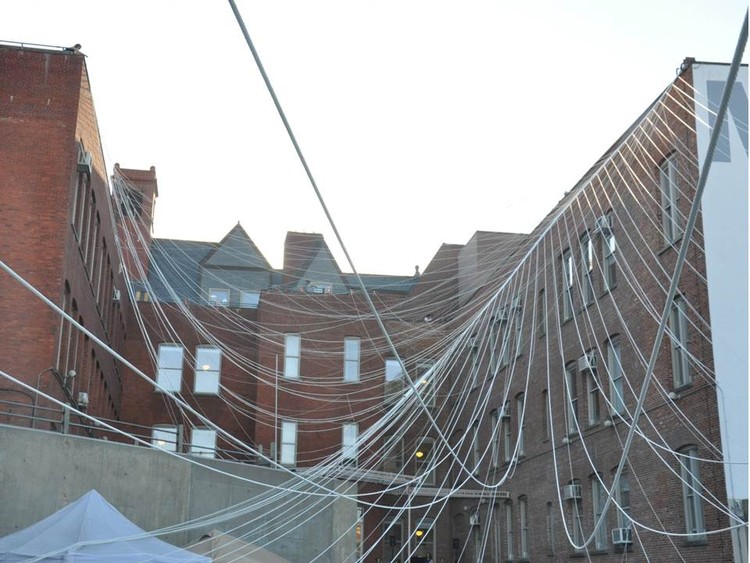 Currently on view at the MoMa, the Small Scale, Big Change: New Architectures of Social Engagement exhibition has provided an exciting and successful glimpse into how architecture can serve the greater needs of society. The museum just shared with us their latest news that starting in November and running through May, the Philip Johnson Architecture and Design Galleries will hosting Building Collections: Recent Acquisitions of Architecture. This exhibit will highlight the great variety of important acquisitions made by the Department of Architecture and Design since 2005, juxtaposing, in several cases, newly acquired material with works long held in the collection in order to underscore the rationale and motives behind collecting architecture at MoMA. Some of the featured pieces include models by Corbusier and sketches by Sullivan.

More about the exhibition, including images of some of the acquired pieces after the break.

New York’s MoMA will be featuring a new exhibition that focuses on architects’ social responsibility. The exhibition, entitled Small Scale, Big Change: New Architectures of Social Engagement, which will open at the beginning of October and run through January, will showcase 11 projects on five continents that “respond to localized needs in under-served communities.” These pragmatic solutions demonstrate how architecture can serve the greater needs of society. From a handmade school in Bangladesh, to a cable car that connects a single hillside barrio in Caracas to the city, these realized projects are infused with passion and a strong drive to uplift society through architecture. “Together, these undertakings not only offer practical solutions to known needs, but also aim to have a broader effect on the communities in which they work, using design as a tool,” explained the MoMA.

A list of the projects that will be included in the exhibition after the break.

Organized by MoMA and PS 1 Contemporary Art Center, the Rising Currents exhibit cannot be missed by architects, ecologists, or green enthusiasts…let alone any New Yorker. The exhibit is a cohesive showcase of five projects which tackle the lingering truth that within a few years, the waterfront of the New York harbor will drastically change. Dealing with large scale issues of climate change, the architects delve into a specific scale that we can recognize and relate to. The projects are not meant to be viewed as a master plan, but rather each individual zone serves as a test site for the team to experiment. The projects demonstrate the architects’ abilities to look passed the idea of climate change as a problem, and move on to see the opportunities it presents. Barry Bergdoll, the Philip Johnson Chief Curator of Architecture and Design at MoMA, explained, “Your mission is to come up with images that are so compelling they can’t be forgotten and so realistic that they can’t be dismissed.”

More about each zone after the break.